On the hunt for the 'psychopath' police officer

Concerned Russian citizens are on the hunt for a police officer who assaulted a man at a peaceful Saint Petersburg opposition demonstration.

Photo of the police assault posted on adromy4.livejournal.com.

On the 31st day of each month of that many days, Russian opposition supporters organise demonstrations dedicated to the 31st article of the Russian constitution, which guarantees the freedom of assembly. The meetings are usually brutally dispersed by the police. But at the July 31 meeting in Saint-Petersburg, police brutality reached a new level. After carting several protesters off to a police bus, an unmasked police officer addressed the crowd: “F*cking animals. Who else want some?” Then he approached a man in a red t-shirt who was doing nothing provocative, grabbed him by the neck and struck him across the face with a police baton.

This display of unprovoked aggression is too much for Russian bloggers, who are demanding that the over-zealous officer be identified and prosecuted. On August 3, the Saint Petersburg police promised to investigate the case but have yet to identify the offender, despite the fact that his face is clearly visible in photos and videos. Some bloggers claim that the officer’s name is Denis Tarasov and that he works in the Saint Petersburg Central District Patrol Guard Service, but this information has not been confirmed.

Aleksandr Kormushkin, a psychologist, participated in the demonstration and has attended several of these types of meetings.

I'm 57. I remember the Soviet days and don't want them back. And I'm not afraid to take part in the protests. It was my fifth arrest. On July 31 2010 I was detained twice, both times by that sadistic officer. The first time he hit me twice in the face and tried to gouge out my eyes. Then we escaped through the roof hatch of the bus we were stuffed in. I was later caught again: they stuck me twice on the head. It was from behind, so I couldn't see who it was, but I was told later that it was the same guy. Later that day I went to a hospital and the doctors discovered that I had a closed cranio-cerebral injury and concussion. I'm going to make a complaint to the authorities.

Another arrested guy on the bus told me the officer had tried to gouge out his eyes as well. Several others were also violently attacked by him. By the end of the meeting he had “warmed up” and became even more aggresive. This guy should be stopped. He's obviously a psychopath, most likely of the epileptoid type. I'm a psychologist working with pathologies, so I know what I'm talking about. He should undertake a forensic psychiatric examination."

A woman was also assaulted by police during the same demonstration. Posted on adromy4.livejournal.com.

Ilya Evseev, a computer programmer who was at the demonstration.

The officer walked straight towards me, leading a group of four or five policemen. He behaved very aggressively, it seemed that he was looking for trouble. When he was some three metres from me, he suddenly turned back to a guy he'd just passed. “What did you say?!” - he asked. The guy answered something, but I couldn't hear it. The officer grabbed him by the neck and pushed him, saying “go!”. The guy hesitated, but stayed where he was. Then the officer slowly took him by the hair and struck him in the face with his baton.

Other policemen encircled them. It seemed to me that they were as shocked as the people in the crowd. The officer pushed the guy towards the other policemen and barked, “Take him”. They took him and directed him towards the prisoners' bus. During this whole episode the guy never demonstrated any aggressive behaviour.

Another guy arrested that day told me that the officer tried to gouge out the eyes of those detained on the bus. I believe that this case is unprecedented, firstly because there were cameras around and, secondly, the officer wasn’t wearing a helmet as usual, so his face was visible.

But unprovoked police beating is a norm at such demonstrations. SWAT teams know that nobody can see their faces, so they beat people in the buses and police stations. Luckily, it hasn’t happened to me. The only time I was arrested, all the police stations had been already filled up, so they just drove us to some back street and threw us off the bus." 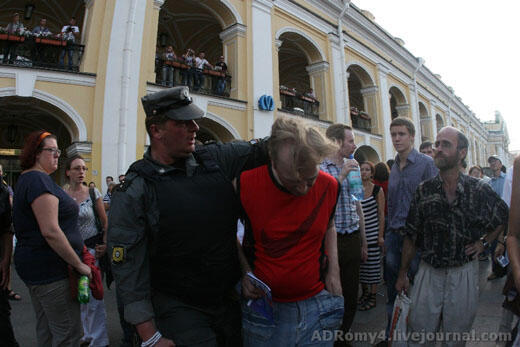 Photo of the police assault posted on adromy4.livejournal.com.