Theary Seng was among the hundreds of people who came to Phnom Penh from all over Cambodia to see the trial of former Khmer Rouge prison chief Duch. She was numb with shock when she heard the sentence: 30 years in jail, possibly as little as 19.

Duch during one of the ECCC's hearings. Photo courtesy of the Extraordinary Chamber in the Courts of Cambodia.

Theary Seng was among the hundreds of people who came to Phnom Penh from all over Cambodia on July 26 to see the trial of former Khmer Rouge prison chief Duch. She was numb with shock when she heard the sentence: 30 years in jail, possibly as little as 19. The thought that a man who personally tortured and murdered thousands of people could walk free at the age of 89 is too much for Seng, who lost both her parents to the Khmer Rouge.

Kaing Guek Eav, better known as Commrade Duch, was found guilty of war crimes and crimes against humanity on by the Extraordinary Chamber in the Courts of Cambodia (ECCC) on Monday, for his personal oversight of the mass murder of 15,000 men, women and children at the S-21 prison he ran under the Khmer Rouge regime.

Initially sentenced to 35-years in jail, his sentence was reduced to 30 years on the grounds that he had been illegally detained before the tribunal was established, and could be cut another 11 years for the time Duch has already spent behind bars.

Although government officials and the UN Special Rapporteur for human rights praised the decision, Cambodia's Foreign Minister Hor Namhong broke away from the official line and called the sentence "too light" and "unsuitable" on Thursday. Duch's lawyers have indicated he will appeal the verdict.

Four other senior Khmer Rouge officials are awaiting trial, but critics of the ECCC have expressed doubts as to whether the court will be able to withhold the challenges of future cases. Originally expected to cost $20 million dollars over a 3-year period, the court has already spent $70 million dollars since 2006, and convicted only one suspect.

Theary Seng is director of the Cambodian Center for Social Development. She escaped Cambodia and fled to the US in 1979 after both her parents were killed by the Khmer Rouge. Today she lives in Phnom Penh.

I was personally deeply, very deeply disappointed at the verdict of Duch's trial. It is utterly incomprehensible. This lenient sentence means that he will only serve 11 hours of prison for every murder he is responsible for.

Yes, Duch fully cooperated with the court, and yes, I believe his remorse was genuine. Yes, he was also illegally detained for years before his trial. But those factors should have granted him a 5-year reprieve from a 100-year sentence, at most, not a 16-year reprieve from a 35-year sentence. I'm not just saying this as a former victim and the daughter of victims; I'm saying this as a US-trained lawyer. The prosecution should have asked for a much stronger sentence [it requested 40 years]. The judges should have granted the maximum sentence. Legal theorists may ho and hum and try to justify the decision, but we are not in a theoretical world. This was a real genocide, the victims and survivors alive today are very real. And they are bitterly, bitterly disappointed and angry.

"Those really pulling the strings have to be brought to justice"

I fear that Cambodians, who are already very cynical about the trial process, will be so disgusted by this first verdict that will they not see the point of trying the four other Khmer Rouge leaders who are currently detained. My theory is that government, which has never supported the work of the special Khmer Rouge court, deliberately pushed for a weak verdict to feed into that cynicism and weaken victim's resolve to seek justice.

Also, by letting Duch get off easily, they are completely undermining his credibility as a key witness for future trials. People are thinking: so much time, energy and money were put into case 001, and if it didn't bring justice then what will?

We can't let that happen. We have to turn the energy from our anger into energy to push for case 002, and the ones after. It's important to remember that Duch was in charge of just one detention centre - there were 200 others, and over 1.7 million people died under the Khmer Rouge regime. Duch was not a big fish, and those really pulling the strings have to be brought to justice.

The ECCCs decisions are obviously based on political compromise between the the United Nations and the Cambodian government [the court is Cambodian-run but backed by UN and international donor funds]. We, the victims of the Khmer Rouge regime and citizens of Cambodia, are looking towards the international community to be extremely vigilant of any trace of irregularities or political interference in this difficult judicial process." 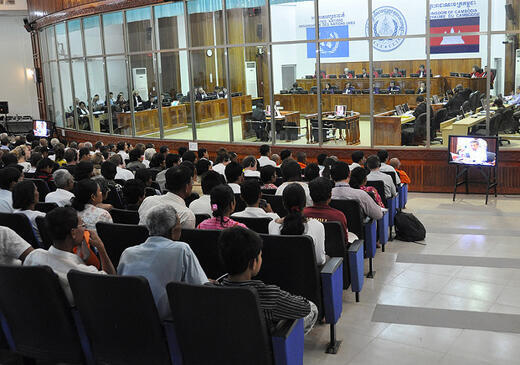 The 49th day of Duch's trial, July 22, 2010. Photo courtesy of Extraordinary Chambers in the Courts of Cambodia. 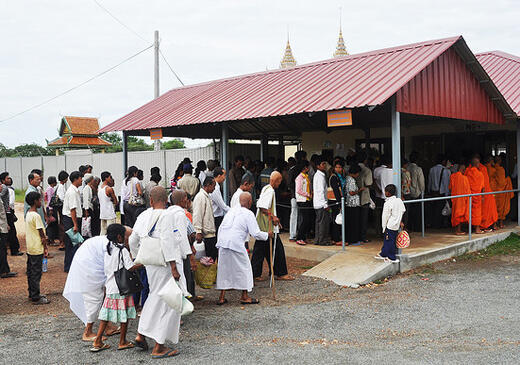 Villagers queue to enter the court buildings on July 22, 2010. Photo courtesy of Extraordinary Chambers in the Courts of Cambodia. 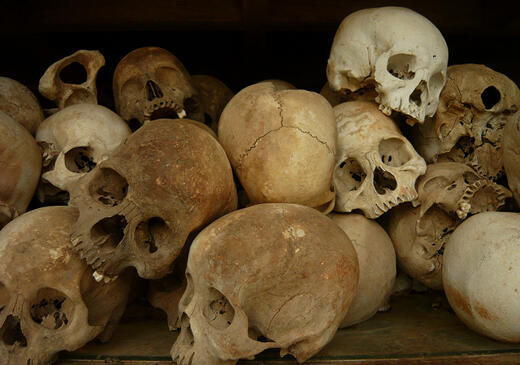 Skulls of Khmer Rouge victims piled up at the former S-21 prison, now a memorial museum. Photo posted by Gekko on Flickr.