Victoria Petitjean works for a women's rights NGO in Phnom Penh. She tells us how a nationwide network of women rallied in Cambodia in support of opposition MP Mu Sochua as she was sued for defamation. This account has not been verified by FRANCE 24.

Mu Sochua, a female MP of Cambodia's opposition Sam Rainsy Party, faces jail for refusing to pay 4,000 dollars in fines and compensation on a conviction last year for allegedly defaming prime minister Hun Sen. The UN High Commissioner for Human Rights has called the proceedings against her an example of the "alarming erosion" of Cambodia's free speech and judicial independence.

Victoria Petitjean works for a women's rights NGO in Phnom Penh. She tells us how a nationwide network of women rallied in Cambodia in support of Sochua. This account has not been edited by FRANCE 24.

Mu Sochua is considered the most prominent woman MP in Cambodia's leading political opposition, the Sam Rainsy Party (SRP). A New York Times article on February 21 described Mu Sochua as "part of a new generation of women who are working their way into the political systems of countries across Asia and elsewhere, from local councils to national assemblies and cabinet positions."

For more than twenty-five years, Mu Sochua has been a leading human rights advocate, working forcefully to prioritize women's issues after years of unrest and tragedy. As Minister for Women's Affairs (1998-2004), she joined with local and international actors, working to stop human trafficking, child abuse, domestic violence, worker exploitation and corruption. During her six years in office, she authored the Domestic Violence Law that was finally passed in 2005. Today, she is also battling governmental abuse of power in her own case as the Cambodian Supreme Court - a tool of the party in power - upholds her criminal defamation conviction for accusing the Prime Minister of gender discrimination during a political meeting a year ago. Her case has been denounced nationally and internationally as a politically motivated prosecution that violates principles of the rule of law and freedom of expression. Nationally, she has found herself being supported by a newly growing movement of Cambodian women. In this, Mu Sochua herself has never changed her line, "Be loud, be fearless, be united". 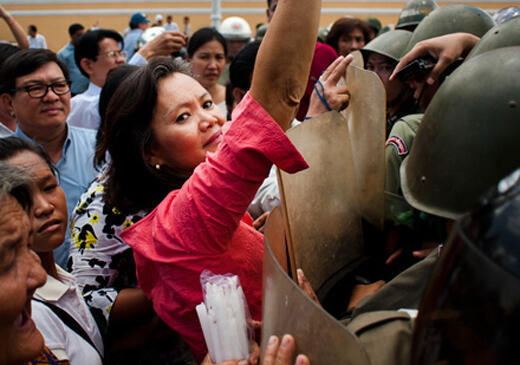 In April 2009, during a political meeting in Kampot Province, Prime Minister Hun Sen called Mu Sochua "strong leg" (a "gangster/thug"). He then further insinuated that the MP had unbuttoned her blouse in front of an officer. Mu Sochua filed a complaint against Premier Hun Sen and sued him for defamation, not only in defence of her own right to dignity and non-discrimination but for that of all Cambodians, including most particularly women. However, her lawsuit was followed by Hun Sen's counter-lawsuit alleging that Mu Sochua had defamed him. In June 2009, the Phnom Penh Municipal Court dismissed Mu Sochua's suit for lack of evidence, and in August, found her guilty, ordering her to pay a total of 16.5 million riels (approximately $4000) in fines to the court and compensation to the premier for "psychological trauma". In October, the Court of Appeals upheld the Municipal Court's ruling. Yet, Mu Sochua did not abandon her stand and this, despite political pressures including on her own lawyer. Indeed, he resigned after enduring political and personal pressures from the accusing party.

On June 2, 2010, Mu Sochua, without a lawyer of her own choosing, was summoned to appear by the Supreme Court, for the third and final ruling. The hearing took place in front of a full audience of SRP members, local and international journalists, as well as human rights advocates and EU representatives and diplomats. During the trial, Mu Sochua maintained the line she has relentlessly taken: this case is driven by the principles of fair trial, freedom of speech and gender justice. Yet, the Supreme Court upheld the verdict from the previous rulings, declaring it could not accept Mu Sochua's defence. She was ordered to pay the fine by 4th July, or else would have to face a prison sentence. On 5th July, Mu Sochua, as required by law, was given a final ten days to pay the defamation fine.

In this time, since the Supreme Court's ruling on 2nd June to uphold her conviction, Mu Sochua and her supporters gathered forces, raising awareness about her case within national and international public authorities, civil society and the media. A petition was circulated and signed in Cambodia and around the world, and was presented earlier in June to the US President, Barack Obama. Further, the UN High Commissioner for Human Rights, Navi Pillay made a public statement, expressing "'serious' concerns about legal proceedings against opposition lawmaker Mu Sochua"

In Cambodia itself, a network of women has been created to support MP Mu Sochua and her cause. This movement, including garment workers, sex workers, university students and teachers, sellers, NGO staff, public officials and farmers, has been organizing a group of citizens who refuse to see MP Mu Sochua unjustly imprisoned for exercising her right to free speech and promoting women's rights in Cambodia. The group has been collecting donations whilst also circulating a petition across the country. Close to 2000 signatures were collected in just a few days, $6000, and broad-ranging national and international media implicated (including Radio Free Asia and Voice of America). As Arun Reaksmey, the movement's spokesperson, declared at a press conference, "Allowing Mu Sochua to be imprisoned will not only take away one of Cambodia's most important political figures and human rights advocates, but will also symbolically undermine the voice of all Cambodian women."

The 15th July was the final deadline for her fine to be paid to the National Treasury. With a resolute passion, Mu Sochua tirelessly maintained her never-changing stand: in the name of human rights, she would not pay the fine. However, rather than sending her to jail, the Phnom Penh Municipal Court ordered the National Assembly, on Tuesday 20th July, to take approximately 4.2 million riel, or $1,000, from MP Mu Sochua's pay check for two months. Today, in the eyes of MP Mu Sochua and the newly created Cambodian women's movement, if this is the end of her trial, this does not terminate the fight for justice and women's rights. As she stated in an interview, she is supportive of the women's movement created behind her and her cause, and would now like to join and work together. The movement's representatives are organizing a roundtable discussion this week, at which MP Mu Sochua along representatives of various women's associations and networks, have been invited. As declared by the movement, "Showing solidarity among us women is our way of expressing our freedom of expression as well as our strong willingness and support, and thereby increase the protection of women's rights."

If there are many uncertainties and barriers still to be faced, it is at least certain that, today, the foundations for a strong women's movement are being set in Cambodia." 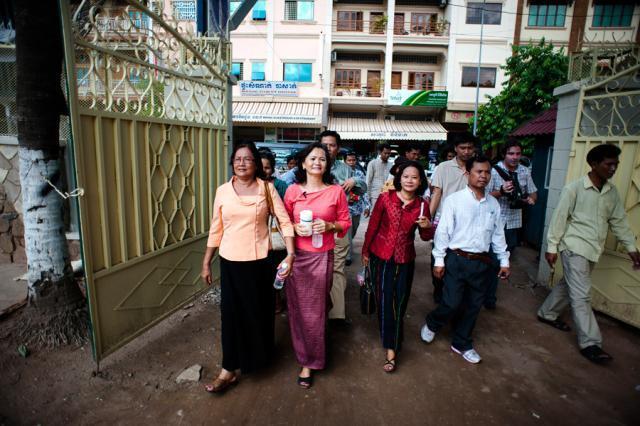