What’s the secret behind the ‘magic bracelets’ worn by cyclists?

Tour de France fans may have noticed identical little bracelets worn by many professional cyclists this year. But these wristbands are no ordinary accessory: wearing them supposedly enhances an athlete's balance, strength and flexibility. Read more...

Tour de France fans may have noticed identical little bracelets worn by many professional cyclists this year. But these wristbands are no ordinary accessory: wearing them supposedly enhances an athlete's balance, strength and flexibility.

According to the wristband's manufacturer, Power Balance bracelets and pendants carry holograms that are "designed to resonate with and respond to the natural energy field of the body" to enhance an athlete's stamina, balance and overall performance. Power Balance claims its products are based on the same energy flow concepts of many Eastern philosophies and that wearing them improves mental and physical capabilities.

Sceptics may scoff, but professional cyclists are buying up the 35-euro wristbands faster than you can say "placebo effect". Many Tour de France cyclists have worn theirs throughout the competition: Mathieu Perget of the Caisse d'Epargne team never takes his off, and several Bbox-Bouygues team members have been spotted wearing the pendant.

According to the Power Balance website, the bracelets are also used by surfers, golfers and swimmers.

This piece was written with the help of our Observer in Italy, Alberto Celani.

Photo posted on the facebook group "Tous avec Mat" (Everyone behind Mat). 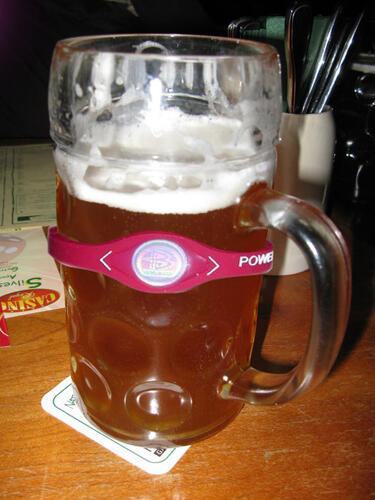 "Are you drunk? No, I just lost my Power Balance bracelet!" Photo posted on Facebook.

"If the wristband does something, you can hardly tell"

Simone Tuna Bosatelli is a designer. He bought the Power Balance wristband.

I saw the bracelet in a sports equipment store and was intrigued by it. I picked out the colour I liked best and bought it. Honestly, I've been wearing it every day since and have yet to notice any effect on my performance. I have it on when I go biking or jogging and feel no effect on my strength, balance or stamina. I sort of regret buying it, especially for 35 euros"

"Cyclists are more superstitious than other athletes"

There's a new bracelet or talisman every year. Remember Lance Armstrong's yellow bracelet: it had no beneficial effect - real or imagined - it was a symbol of Armstrong's fight against cancer. But all the racers wore one. Five years ago, Italian climber Gilberto Simoni wore a funny-looking bracelet, claiming that it stopped him from getting sick.

Cyclists are particularly quick to buy into this kind of fad. They're real copycats, and very superstitious. When one of them shows up wearing something new or intriguing, chances are the rest of the team will buy it too.

The new Power Balance bracelet benefited from an excellent marketing campaign. Many journalists were sent one. At least 20 Tour de France participants are currently wearing one. The great sprinter Alessandro Petrarchi has admitted to wearing one even though he's not sure whether it has any effect on his performance.

The bracelet is made of various stones and minerals. Cyclists think that it helps relax and free their muscles, and bring them strength and balance. Apparently it also helps you sleep!

The wristband may have some positive effects, who knows? But a cyclist asked me to get a doctor's opinion, and the doctor told me that there was absolutely no scientific proof of the Power Balance's effectiveness. Personally I'm sceptical. And 35 euros is expensive for something that maybe works. In any case, the bracelet won't replace the Italian cyclists' favourite lucky charm: a medallion of the Virigin Mary stuck under their bike seats."

Video commercial for the Power Balance band and pendant