A group of Tunisian farmers is waging war against a bank that they say is trying to force them off their land. Read more and see the photos...

Residents and farmers rally in front of the regional government house in Sidi Bouzid.

A group of Tunisian farmers is waging war against a bank that they say is trying to force them off their land.

Having bought land which came at a hefty rate of interest in 2003/2004, the farmers, from Regueb, centre-west of the country, found themselves unable to keep up with their repayments with the Banque National Agricole (BNA).

They were forced to file for bankruptcy in June and their lands were ordered to be sold at auction by a judge. On June 23, the 20 families began a mass sit-in on their farms, and since then, their movement has gained ground. But it remains embattled and police cracked down on a protest march on July 15.

FRANCE 24 contacted the BNA but is yet to receive a response.

"We believe that there was a scheme in place, orchestrated by the bank"

Slimane Rouissi is the regional union representative for farmers in Regueb. He was at the protest in Sidi Buzid - the region in which Regueb is located - on Thursday July 15.

This affair has come about because of a grand government scheme launched in 2001. It was supposed to encourage farmers, especially young ones, to invest in the sector. So most of those who took out loans were young apprentices starting their own businesses.

The process was doomed from the start because the BNA insisted that the borrowers buy a certain amount of equipment before giving them the first instalment; so they were already in debt elsewhere before the bank loan. Because of that, they soon found themselves juggling repayments to two lenders. And obviously the commercial lender, rather than the bank, was their priority.

The BNA acted very unfairly. Not only was the interest on their loans huge (between 12% and 19% [the average in Tunisia is 8%]), but they refused to allow the borrowers to extend their repayment period.

As has been pointed out in court, letters sent to the farmers about their looming bankruptcy were methodically sent to the wrong addresses. That left the farmers with no option but to file for bankruptcy, because they'd surpassed the date when they were able to contest it. Then, during the auction, there was only one person bidding for the lands (which was, incidentally, sold for a measly sum).

What we're protesting here is that the bank did not follow the rules in bringing about these bankruptcies. We believe that there was a scheme in place, orchestrated by the bank and the judge, who, strangely enough, was from the same region as the people who bought the land.

On Thursday, we began demonstrating in the morning. Some of the top farmers from the region had planned to go the regional government to talk to the officials there. But the police refused to let them pass. Passers-by began rallying round the farmers; and suddenly, there were about 400 of us. We held our banners high and chanted slogans.

Once again, the police tried to disperse us. They snatched our banners off us and used batons and teargas to stifle us. One man fainted and a woman had to go to hospital." 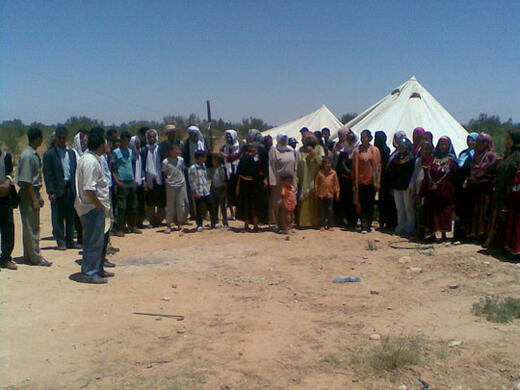 The farmers' sit-in in Regueb, where they put up tents to sleep under. Photo posted on the Facebook group in support of the farmers. 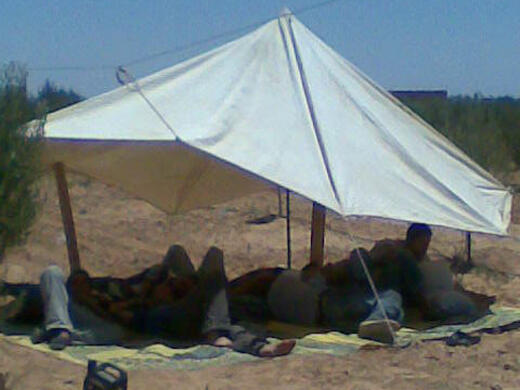 Farmers at the sit-in sleeping under a temporary tent. 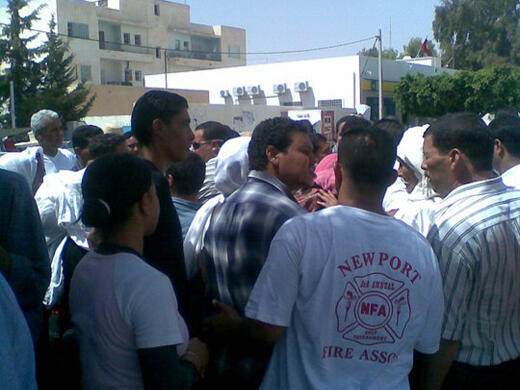 Protestors in front of the regional government house. Photo sent to us by our Observers Slimane Rouissi. 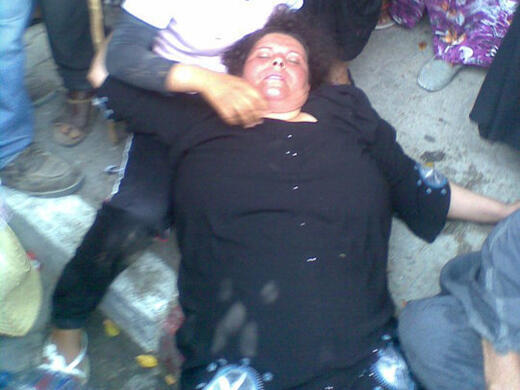 A woman passes out during the protest. Photo sent to us by our Observers Slimane Rouissi.