A relatively unknown hunting practice has started to tarnish the reputation of the Iberian Peninsula. Each year, thousands of "galgos" - the name given to the greyhounds used by Spanish hunters - suffer an agonising death for not bringing back enough game. Read more...

Photo of a hanged greyhound taken from a video published on YouTube by "levrierespagnol" on 2 February 2010.

A relatively unknown hunting practice has started to tarnish the reputation of the Iberian Peninsula. Each year, thousands of "galgos" - the name given to the greyhounds used by Spanish hunters - suffer an agonising death for not bringing back enough game.

Whilst in France a campaign has recently been launched against abandoning pets, intended to coincide with the beginning of the holidays, in Spain the number of victims of the last hunting season is being counted. It is difficult to obtain precise figures but it is estimated that around 20,000 galgos are killed in atrocious conditions every year.

Spain is the only country in the European Union which has not banned "hunting with greyhounds", a type of hunting which involves the dogs killing game for their masters. In the rest of Europe, hunting dogs are only used for chasing the game out of the undergrowth, into the path of the hunters.

At the end of every hunting season, the Spanish hunters, called "galgueros", get rid of the dogs which did not bring back any game. This ritual is meant to "restore the honour" of the hunter, who "punishes" his dog for its poor performance.

To do this, the galgueros do their utmost to torture their dogs, subjecting them to slow hanging, immolation, asphyxiation, poisoning...These customs are condemned by animal protection associations, which are trying to find sanctuaries for greyhounds abroad until such practices are banned in Spain. 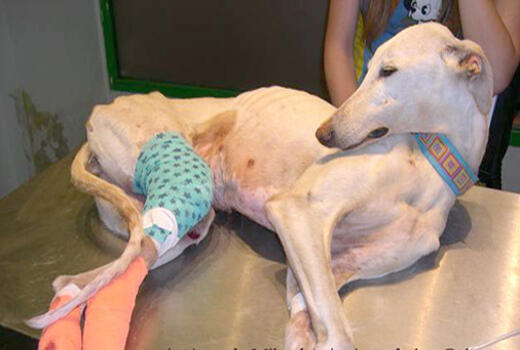 An abused greyhound who was taken in and treated by the Pro-Galgo association. Photo taken by our Observer Mo Swatek. 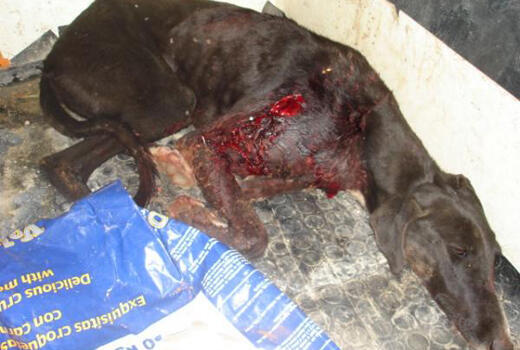 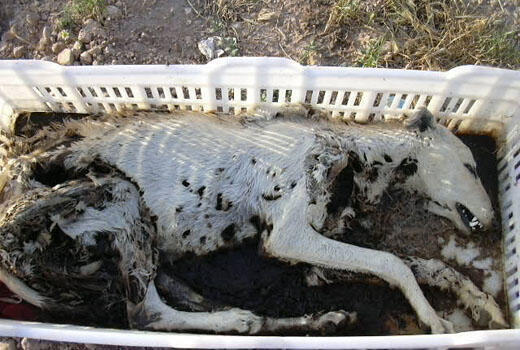 A tortured greyhound found dead in a plastic crate. Photo published by Nuria Blanco on the Levriers association website.

"The EU must impose an outright ban on hunting with greyhounds"

Mo Swatek is a Swiss national, living in Spain between Tarragona and Barcelona. She is the founder of the Pro-Galgo association.

In Spain, hunting with greyhounds is not simply a tradition but a national sport, particularly in regions like Castile and Léon, Castile-La Mancha, and Andalusia. There are two types of hunters: individual hunters and those who belong to the National Group of Hunters. As well as killing the dogs at the end of the season, the galgos are also mistreated or tortured after a defeat during a tournament or competition, as is the case for coursing.

We have great difficulty fighting against these practices and the victimisation of the galgos for two reasons. Firstly, the authorities are very lax when it comes to this subject. If you want to denounce the murder or torture of an animal, the local police will not lift a finger, if you want a reaction you have to call the Guardia Civil (national guard). As for bringing the matter before a court, that's an entirely different ball game. Secondly, many Spanish politicians are amateur hunters and do not want to be deprived of their pleasure.

Our association is based in Catalonia, a region that is pro-European and known for having quite progressive views on various subjects. [The Catalan Parliament is well on the way to passing a law banning bullfighting].

So if we struggle to stop these practices here, imagine what it must be like in the southern regions where hunting is widely practised! In these regions, the hunters are often influential people and people dare not denounce a neighbour for torturing his dog for fear of being attacked or having their house burnt down! This is not an exaggeration.

To put a stop to these cruel acts, the European Union must decide to impose an outright ban on hunting with greyhounds, with no exceptions. No doubt the law will see a lot of dogs abandoned, but surely that's better than torture?

At the same time, the authorities need to take the time to ensure that individual hunters are meeting the sanitation requirements. When we established our animal sanctuary, we had to deal with an enormous number of formalities: application forms, paperwork, sanitation regulations etc. The galgueros do not have to comply with any of these demands. Such a system is necessary to bring an end to the agony of the Spanish greyhounds."