Two soldiers from Cameroon's most hardened army unit have been caught on mobile phone terrorising a group of students. For what offence? Accidentally hitting a girl on the head during a kick-around. Read more and see the footage...

The attack was recorded by bystanders.

Two soldiers from Cameroon's most hardened army unit have been caught on mobile phone terrorising a group of students. For what offence? Accidentally hitting a girl on the head during a kick-around.

On Thursday 10 June, a group of students were playing football on the "2K la Grâce" campus of the Yaoundé-II University in Soa, in the north of the capital. As a female student was crossing the pitch, the ball hit her on the head, breaking her glasses. She left the pitch threatening the players with revenge.

The following day, Friday 11 June, a lieutenant and captain of the Rapid Intervention Battalion (BIR) - a special forces unit likened to SWAT forces - showed up on campus asking after students who had been playing football the day before. What happened next was filmed by fellow students in the videos below.

“If any of you think you can run faster than a bullet, then I’d like to see you try”

Jacques Onana (not his real name) is a student who witnessed the scene.

It was about 5.30pm when a captain and a lieutenant of the BIR turned up on campus along with the sister of the girl who had been hit by the football. When they found a student who admitted to having had played football the day before, they hit him. They dragged him from his room and forced him to go round the campus identifying other players.

The two soldiers rounded up five students in the courtyard. Then one of them took out a gun, pointed it at them and said: ‘If any of you think you can run faster than a bullet, then I'd like to see you try'.

For almost an hour they forced the students to kneel with their hands behind their heads and crawl through the dirt, repeatedly hitting them on the head with truncheons.

A lot of people were watching, but nobody tried to stop what was happening. At one stage a girl shouted ‘Your commander is coming'. The officers panicked, and took the students to the barracks.

Twenty minutes later, they returned to find the sixth player, the one that had accidentally hit the girl with the football. They subjected him to the same treatment as the others, squashing his face with their ranger boots. At one point the victim tried to escape. One of the soldiers took out his gun and threatened to shoot him if he went any further. 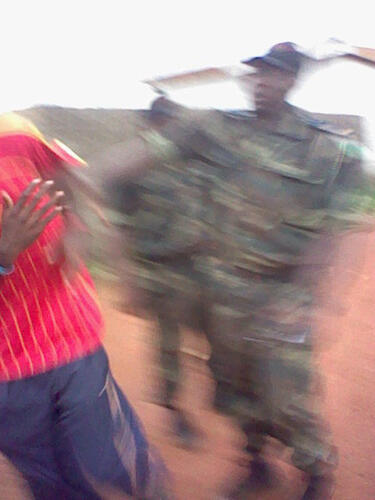 The student that accidentally hit the girl on the head (in red). 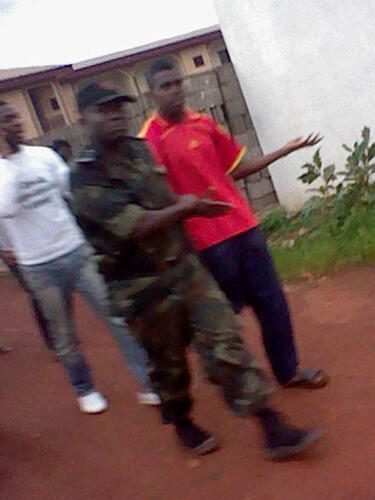 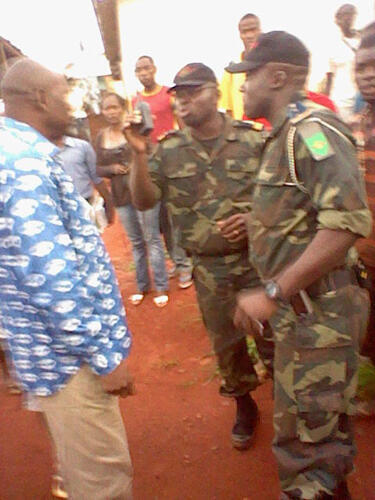 The police commissioner (in blue) attempts to calm the two soldiers. Photographs taken by an anonymous witness.

The local police commissioner arrived and tried to calm down the two soldiers. While that was going on, the students had surrounded the soldiers' car. One of the pair took out his gun - for a third time - in order to get through the crowd. The soldiers took off in a hurry.

The next day a meeting was organised at the police commissioner's office. Sums from 80,000 to 250,000 CFA francs [between 120 and 380 euros] were given to people who had filmed the beating in exchange for their mobile phone or camera, on the condition that they would not talk about the incident, neither on the Internet nor to the media. [The scandal was later revealed by Souley Onoholio, a journalist from local daily newspaper Le Messager.]

The university rector referred the matter to the ministers of defence and higher education and an investigation is underway.  Investigations here rarely lead to results however...

The BIR was set up to combat highwaymen. But [the soldiers] tend to be the ones starting the fight, not preventing it. Most of us feel more threatened by them than protected."