A huge penis towered over the Russian city of St. Petersburg on June 14, right across from the infamous FSB (former KGB) headquarters. Images of the strange sight spread like wildfire on the Russian media and Internet. Even the Russian police were amused. Read more and see the photos...

A huge penis towered over the Russian city of St. Petersburg on the night of June 14, right across from the infamous FSB (former KGB) headquarters. Images of the strange sight spread like wildfire on the Russian media and Internet. Even Russian police were amused.

Those who painted the huge penis on the Liteiny bascule bridge are members of an underground, oppositionist art group called Voina (the Russian word for "war"), which stages provocative, unauthorised performances in the streets of Russian cities.

The painting, which pointed skyward whenever the bridge was raised, was displayed in full view of the citizens of St. Petersburg. Firefighters eventually washed it away with their hoses. A bus full of tourists even drove to the spot and took pictures in front of the gigantic phallus.

The artists who drew the penis were almost immediately arrested by the police. One of the participants, Lionya Yebanuty ("Lionya the F**khead"), was detained for two full days after the performance. However, according to her, the young officers who detained her found the sight incredibly amusing and took photos of the massive penis with their cell phones to send to their friends and colleagues.

Images of the June 14 performance 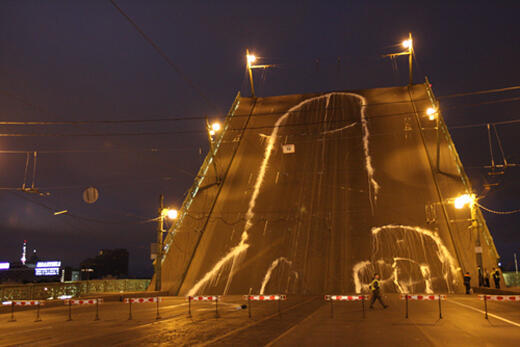 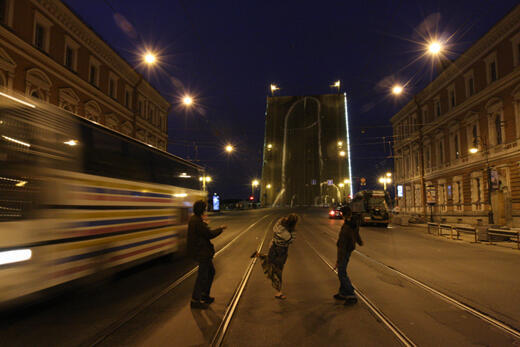 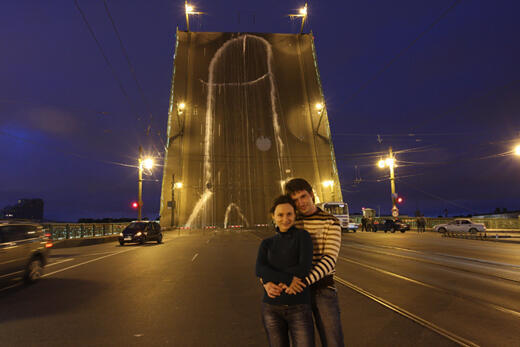 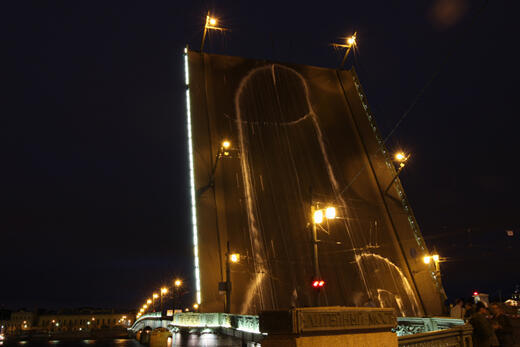 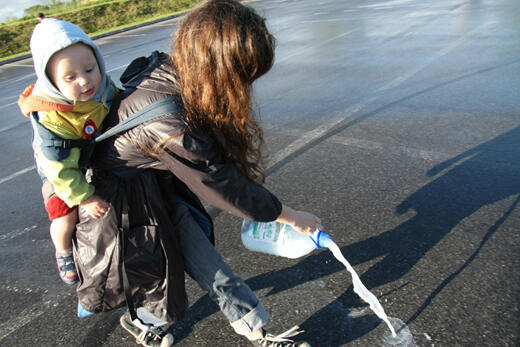 A member of the art group practicing for the performance. All photos are courtesy of Voina art group.

"We practiced drawing the penis as fast as possible"

Alexey Plutser is a journalist, artist and member of the art group Voina.

We practiced for two weeks before the performance on the Liteiny bridge. We had to be ready to draw the penis as fast as possible, in case guards saw us and tried to stop us, which they did. It took us only 23 seconds on the day of the actual performance.

The bridge guards detained and beat our activists Mor and Lionya Yebanuty, and alerted the police, but not before they succeeded in drawing and setting alight our "Universal Cosmic D*ck", which was 65 metres long and 25 metres wide.

As expected, the bascule bridge began rising up right after the artists painted on it, and there was nothing the guards to could do to stop it.  It looked like a gigantic, mechanical erection, in plain sight of the ex-KGB building across the street.

Above all, the huge d*ck is a caricature of the corrupt totem of power that governs Russia."