The French football saga seen from abroad: “They’re making fools of themselves”

The French football team walked out of a training session in South Africa Sunday over the expulsion of striker Nicolas Anelka a day earlier, sparking a public meltdown ahead of a key World Cup game against host country South Africa on Tuesday. We asked our Observers around the world how “Les Bleus” are seen in their respective countries.

The French football team walked out of a training session in South Africa over the expulsion of striker Nicolas Anelka a day earlier, sparking a furious row between captain Patrice Evra and a fitness coach and the resignation of French Football Federation managing director Jean-Louis Valentin.

The team's public meltdown comes ahead of a key World Cup game against host country South Africa on Tuesday. We asked our Observers around the world how "Les Bleus" are seen in their respective countries.

IVORY COAST: "The players have a right to speak up if they're unhappy"

Mamadou Kone is a student in Abidjan.

If the players aren’t happy, they should be allowed to speak up. In my view, the French Football Federation is to blame for all this. You got the sense when team captain Patrice Evra gave a press conference after Anelka was thrown out of the team, that he wasn’t free to speak his mind. I’m not surprised the anger boiled over at the training session the following day. It’s shocking the team’s members weren’t consulted over as serious a move as expelling one of their players.

I think the exclusion was intended to humiliate Anelka rather than punish him.It really looks like an act of revenge. The only thing anyone can see is that the team is going through a really, really bad time." 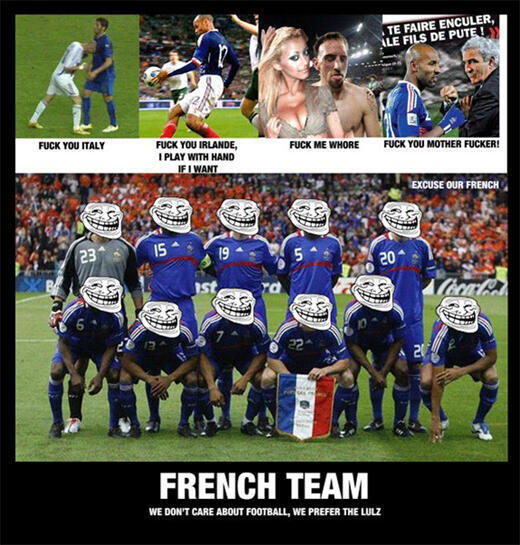 ALGERIA: "What in the heck got into them?"

Hemimi Hadj Sahraoui is a coach for Saudi Arabia's national athletics team. He lives in Algeria.

I’m really shocked by what’s happening to the French team. What the heck got into them? There was trouble brewing even before the team headed to South Africa. There were rumours of cliques within the team, of unhealthy rivalries. The fact that Benzema, Nasri or Ben Aarfa, the only three players of Arabic descent, were not selected to play in the World Cup was a cold shower for fans from the Maghreb, who follow French football closely.

I think the people at the head of the French football federation are the ones to blame. They left coach Raymond Domenech in place although several football experts had been ringing alarm bells on his skill and legitimacy since Euro 2008, and even before that. When mutinies happen, it’s because the leader of a group is weak and incompetent."

IRELAND: "What goes around comes around"

Desmond Gilhooly is 35. He lives and works in Dublin.

To be honest, I've found the French performance pretty pathetic so far. The team seems to have imploded in the last 48 hours. Here in Ireland, we can’t help but think that it’s just bad karma, since France qualified for the Cup by beating us thanks to Thierry Henry’s handball. It wasn’t a fair win, they should have clearly rejected the score and called for a re-play. Right now, people are looking at this meltdown and thinking: "what goes around comes around".

In this World Cup, whenever France plays, the Irish automatically support the opposite team. I even think that on the odd chance (although I don’t see it happening) of France facing England later in the tournament, we would have to support England! That never happens! Honestly though, after the 2-0 loss against Mexico, I don’t think France stands much of a chance of getting beyond this first round."

Carlo Tallarigo is 27. He lives and works in Milan.

France is really making a fool of itself in this World Cup. It’s a bit of an ongoing joke here in Italy. What I don’t understand is why the French Football Federation didn’t let go of Domenech much earlier, when it’s been clear for years that he wasn’t qualified for the job.

The only reason France reached the World Cup finals against Italy for years ago was because the older players in the team - of the “Zidane generation” - took matters into their own hands to organise the team and the games. I think France will see better days under its future coach, Laurent Blanc, but this year, I don’t think they’ll get beyond this first round."