The death of Khaled Saïd, one police blunder too many?

Shocking photos of a 28 year-old man, who died at the hands of the police in Egypt on 6 June, have provoked a wave of angry protests over the past few days. Read more...

Photo published on the Facebook page "We are all Khaled Said".

Shocking photos of a 28 year-old man, who died at the hands of the police in Egypt on 6 June, have provoked a wave of angry protests, and subsequent arrrests, in the country.

There are two opposing versions of events in this explosive affair. The first claims that at around 8.30pm on 6th June two police informers entered an internet café in the city of Alexandria (in the north of Egypt) and demanded to see Khaled Mohammed Saïd’s identity papers. Saïd refused to obey the plain-clothes officers. According to eyewitnesses and Human Rights organisations, one of the two informers held him in an armlock whilst the other beat him to death. "He was dragged outside of the internet café and beaten to death in the street", claims the El-Nadee Centre, a local Human Rights organisation.

In a press release from the Egyptian Security Information Centre, Egyptian Authorities deny this version of events, stating that Khaled Mohammed Saïd suffocated to death. According to the authorities, he had swallowed some drugs just before being approached by the police.

But the photos that were posted on the internet on Thursday (which we decided not to publish) show Khaled’s bruised face and body. The authorities claim that these markings were caused by the autopsy, but many Egyptians remain unconvinced. On both Saturday and Sunday, several hundred people took part in demonstrations in the streets of Alexandria and Cairo, calling for justice and demanding an end to the State of Emergency that has been in force in Egypt since 1981 (the Egyptian Parliament prolonged it for another two years on 11th May).

On Tuesday, in response to mounting pressure, the Public Prosecutor ordered Saïd’s body to be exhumed in the presence of his family and demanded that a second autopsy be carried out by a representative of Alexandria’s prosecution service.

Khaled and his mother Photo published on the blog Egyptian Chronicles.

The demonstrations in Alexandria 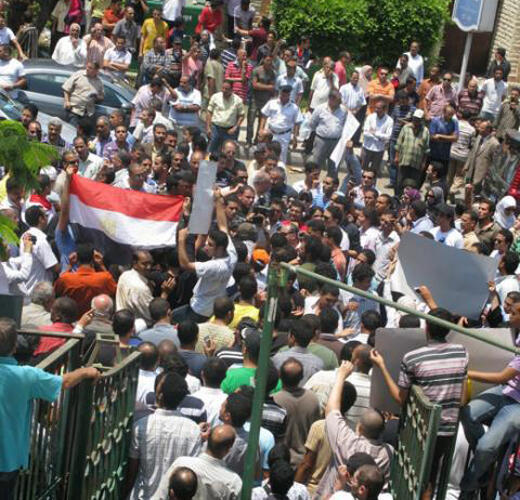 "The Khaled case has become a national scandal"

Ismail Alexandrani is an activist from a Human Rights organisation and one of the organizers of this weekend’s protests in Alexandria.

The people here are wild with anger. What happened was a crime, committed quite openly by police officers, in the second largest city of the country. Both the authorities and media officials tried to tarnish Khaled’s reputation by claiming that he was involved in a number of criminal activities: carrying an illegal weapon, drug-taking etc. These accusations are clearly false and a number of documents have been published which prove this. The sole purpose of these claims was to depict Khaled as a petty criminal who deserved what happened to him.

Everyone is asking why Khaled was treated with such brutality. His mother believes that he was killed because he possessed a video recording that showed police officers sharing out wads of banknotes and sachets of drugs amongst themselves in a police station in Alexandria. [The Minister of the Interior asserted that these officers were actually celebrating the arrest of a drug-dealer] Among these officers was one of the alleged killers of Khaled, a man infamous for his brutality.

The video recording that Khaled’s family believe was the reason for his death. Posted on YouTube. Postée sur YouTube.

On Facebook, a friend of mine and I called all Alexandrians to come to a prayer service on Saturday, in memory of the deceased. The prayers were followed by a demonstration, which was repeated the following day in front of Khaled’s home. We were surprised by the number of participants. Looking beyond the murder, people wanted to denounce the intimidation by and the brutality of the security services, who continue to act with impunity. The Khaled affair thus became a national affair, with people chanting slogans calling for the removal of Moubarak and the Minister of the Interior. The demonstrations also demanded the end of the State of Emergency, as it is simply an excuse for the government to intimidate people.

Five years ago protests like this would not have taken place. Although they are unlikely to make a difference in the near future, they are another step towards bringing down this wall of intimidation and creating, little by little, new spaces that represent freedom and democracy."