The issue of the Vietnamese-Cambodian border has been one of contention for 25 years now. The latest map sees dozens of Cambodian villages on the wrong side of the border. One of our Observers in Cambodia follows the hindered efforts of the opposition party to look into situation.

The issue of the Vietnamese-Cambodian border has been one of contention for 25 years now. The latest map sees dozens of Cambodian villages on the wrong side of the border. One of our Observers in Cambodia follows the hindered efforts of the opposition party to look into situation. This account has not been verified by FRANCE 24.

Victoria Petitjean (Victo) works for women's rights NGO in Phnom Penh. She accompanied the opposition on their mission to the border.

After Cambodia gained its independence from France in 1953, the frontiers were firmly established (apart from a small number of islands) by King Sihanouk and were officially recognized by the UN. However, these were challenged by Vietnam after its intervention of 1979 against the Khmer Rouge Regime, arguing these had not been clearly defined after France's withdrawal.

The newly established government (which would be in place from 1979 until 1989), including amongst its leaders, Hun Sen, and supported by Vietnam, signed a number of treaties with its foreign ally, including the one of 1985, bringing changes to the Cambodian-Vietnamese borders.

However, this government seen as a foreign-dominated country was not internationally recognized. As a result, with the UN-led Paris Treaty of 1993, all treaties, including that of 1985, were rendered obsolete. Yet, the same leaders of the 1980s period, including Hun Sen, remained in place and maintained strong links with Vietnam. And, in 2005, a new Treaty was signed, called the ‘Additional Treaty' in which the frontiers of 1985 were re-established. 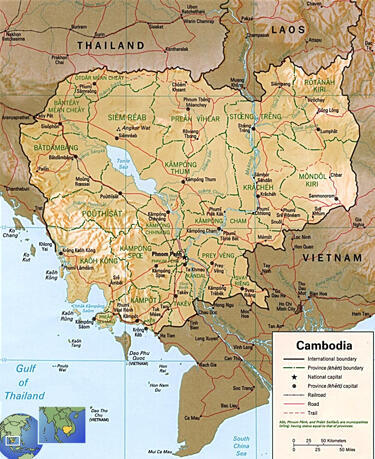 This treaty has now been adopted by the parliament and recognised by the king, and is now being applied. However, this is having crucial consequences for Cambodian citizens living all along the border, whom are losing parts if not all of their land.

Having now received for five years numerous villagers' personal complaints of land being absorbed into Vietnam, Cambodia's opposition Sam Rainsy Party (SRP) has been determined to carry out fact-finding missions on government alleged plantation of temporary demarcations for Vietnam on Cambodia's territory, within the context of the 2005 recently-applied treaty. This is the case in the Takeo (Takev) Province notably, where the SRP was leading a fact finding mission last week.

The Cambodian authorities had rejected the SRP's demand with the National Assembly President, Heng Samrin, forbidding this visit earlier in the week. However, as SRP spokesman Yim Sovann declared on 2 June this year, ‘We are the lawmakers, so we have the obligation [...and] we have the right to monitor government action'. Mr Sovann had also added that this visit was to be done peacefully, solely to visit the border.

Thus, on 3 June, as planned, 22 SRP lawmakers, accompanied by local and international journalists, gathered at the party's headquarters early in the morning. Leaving with a dozen cars, the group slowly gained in size, as more SRP members joined it along the way, finally reaching over 100 people.

However, the journey to the border was not without blockades. As the group approached the border, it faced several barriers, at first from the police, and then from villagers themselves. First, after only a two hour drive, the convoy was arrested by the district police, pretexting the illegality of some of the motorbikes accompanying it. However, police were unable to justify their actions, and after a threat to SRP activists the motorbikes were allowed to leave.

Soon however, at Prey Yuthka village, 3-4 kilometres away from post 270, the group faced another barricade. The villagers had set a truck - belonging to the village chief - on a bridge in order to stop the SRP convoy, claiming it was not their duty as MPs to carry out such mission.

Despite attempts at discussion, the group of villagers, followed closely by the local police, showed no flexibility. Wanting to avoid confrontation with the villagers and yet determined to carry out its duty to protect Cambodia's territorial sovereignty, the SRP members tried to find a way around.

After one member of the group jumped into the river and walked across in knee-length high water levels, the entire group followed. And thus, the delegation continued its fact-finding mission on foot.

After 2km of walking, the group faced its third and final barrier, at An Chan village. There, an even larger group of villagers, accompanied again closely by members of the police, bared the road. Again, it refused the SRP to carry out its objective. The divide at post 270 was only a temporary one and they had received orders from their commanders and would not move until/ if these changed.

At this point, SRP spokesperson Yim Sovann spoke through microphone on behalf of the delegation, emphasizing the struggles it had gone through during this five hour trip and the illegitimate police interventions. Mr Sovann continued his intervention declaring the government had forbidden this visit until now, thus maintaining a lack of transparency in the country's border demarcation and ultimately, the country's sovereignty.

The two groups discussed for several minutes, exchanging questions and comments, including on the SRP's support of the government strict border policy with Thailand and its determination to ensure it applied the same principles on the border with Vietnam.  Further, the SRP restated its determination to visit this border post in the future and this for the benefit of Cambodians, and would thus now ask the Government's Committee on Borders to check the delineation again.

For the first time, the SRP did not face opposition from police forces, but villagers themselves. Wanting to respect their position, the SRP members decided to go back. Yet, on the way back, the members met several inhabitants of An Chan village who affirmed all had been threatened and/ or paid by the authorities to oppose the SRP's fact-finding mission.

Two of the villagers confirmed that their rice fields have been encroached and once the border demarcation posts would be made permanent they would lose up to two hectares of land, thus cutting their family income and denying them the right to land tenure as they have been living on the land for over two decades. One of the two villagers is seeking refuge in Phnom Penh as he has received direct threat from provincial authorities."