Facebook groups have launched a successful campaign to ban what they call "enemies" from the social network by reporting them to the site's administrators. Their main targets are human rights advocates, atheists, and those accused of being "anti-Islam" or simply "too liberal".

One of the deactivation groups.

Facebook groups have launched a successful campaign to ban what they call "enemies" from the social network by reporting them to the site's administrators. Their main targets are human rights advocates, atheists, and those accused of being "anti-Islam" or simply "too liberal".

Lists of targets are compiled on Facebook itself, in groups like "Pesticide" and "The cleansing bureau". Hundreds of Facebook users are on the lists - especially if they're gay or women who refuse to wear the veil.

The group administrator asks members to alert the Facebook admin to the targets' accounts by signalling them as "fake profiles". And it's working. Hundreds of users, most of them from Tunisia but also elsewhere, have seen their accounts disappear.

That's because if a large enough number of people signal a profile, then it is deleted automatically, without human verification. Facebook, which is currently facing huge criticism for privacy issues, confirmed that the automatic system was in place, after an employee of the American company tested it.

Who’s behind the “deactivation groups”

There are a number of hypotheses concerning who might be behind the groups. At first glance it seems to be Islamic fundamentalists. According to new technology blog ReadWriteWeb, however, the Tunisian government may have got involved in a bid to disrupt websites it is not comfortable with.

Instructions on "The cleansing bureau" page: 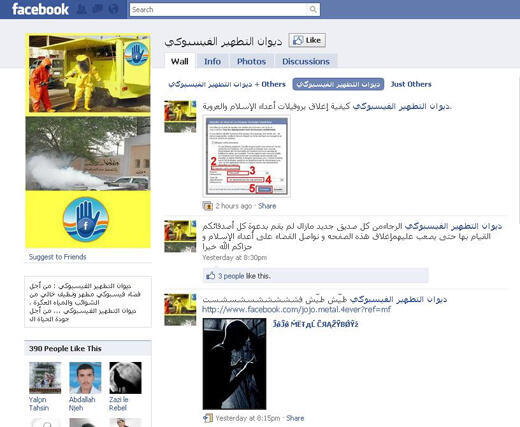 Messages posted on the wall of the "Sniper" deactivation group:

Sarah Ben Hamad works in tourism and writes a blog. Her Facebook account has been targeted several times by deactivation groups.

The people on these lists are often bloggers and intellectuals who are accused of being atheist, pro-Zionist, anti-Muslim activists and homosexual. People of Berber origin are also targeted. The groups are calling for Tunisia and the Maghreb to be 100% Arab and 100% Muslim.

I don't know who's behind these groups; you can't see who the administrator is. I think it's probably easily influenced kids who've got nothing better to do. I'd like to know why people follow their advice without knowing who the people they're targeting are. Is it really a religious fantasy or just an irrational hatred? And why doesn't Facebook notice the unusually high amount of requests coming from them and do something about it?"

Naruto (not his real name) is a Tunisian student and active web user who currently lives in Japan.

I was on Facebook on Tuesday when I received a message asking me to log in again. When I tried, I was told that my account had been deactivated. I didn’t even get an email telling me why.

I emailed Facebook to ask them to reactivate my account, but for the time being, all I’ve had in response is an automatic reply. I sent them a few details about myself and a link to my LinkedIn account to prove that I really exist, but I didn’t include a photocopy of my ID like they suggested, because I think that’s giving them a bit too much information.

As I no longer have access to the site, I can’t find out if my name is on one of the lists. There’s no reason I should have been blocked from Facebook. They need to take a fresh look at their supervision system. It’s far too easy to get someone removed, and sadly, certain people have worked that out.”