"Red Shirt" protestors in Ubon Ratchathani province have burnt the City Hall to the ground. Our Observer there has just sent us these photos. See more...

Anti-government "Red Shirt" protestors in the provincial capital of Ubon Ratchathani have burnt the City Hall, which soldiers were guarding, to the ground. Our Observer there has just sent us these photos.

MeMock is an expat who runs a café three blocks away from the building. He took these photos on his iPhone. 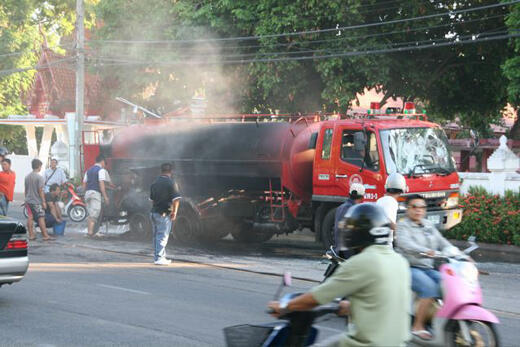 Memock says that the protestors also set fire to this fire engine as it was on its way to the scene.

Along with the province of Ubon Ratchathani (its capital is of the same name), 21 other provinces (out of the country's 76) have been placed under a state of emergency. Most of them are in the northeast of the country, the heartland of the Red Shirts.