American soldier in Okinawa: “Only a minority think we’re monsters”

Japanese Prime Minister Yukio Hatoyama announced on Tuesday that he will not be closing the Futenma American airbase on the island of Okinawa, despite promising to so in his election manifesto. The decision has enraged local residents, who say the base and its residents are a constant nuisance. An American soldier based in Okinawa gives his perspective on this contentious issue. Read on...

Japanese Prime Minister Yukio Hatoyama announced on Tuesday that he will not be closing the Futenma American airbase on the island of Okinawa, despite promising to so in his election manifesto. The decision has enraged local residents, who say the base and its residents are a constant nuisance. An American soldier based in Okinawa gives his perspective on this contentious issue.

Following Japan's defeat and the end of the Second World War, the United States and Japan signed a security agreement stating that the Americans could keep their military bases on Japanese soil on the condition that they acted as the country's security force. Today, Japan has its own army, but the "Treaty of Mutual Cooperation and Security between the United States and Japan", revised in 1960, is still in existence.

According to the website Close the Base, Okinawa Island's residents account for just 1% of the Japanese population, yet the island hosts 74% of American soldiers based in the country. The website cites "33 facilities exclusively for the US military, 29 water areas for military training and security, and 20 air force facilities". The infamous Futenma base is situated in the middle of the city of Ginowan. 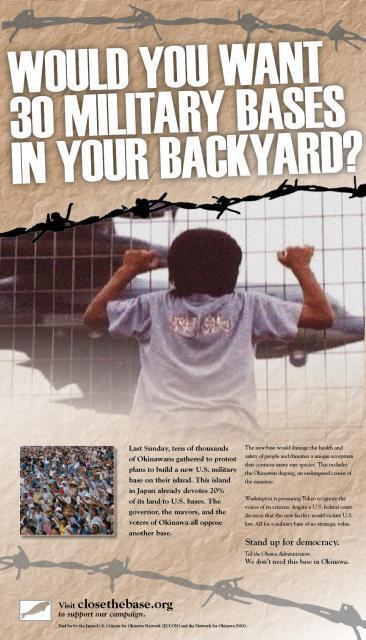 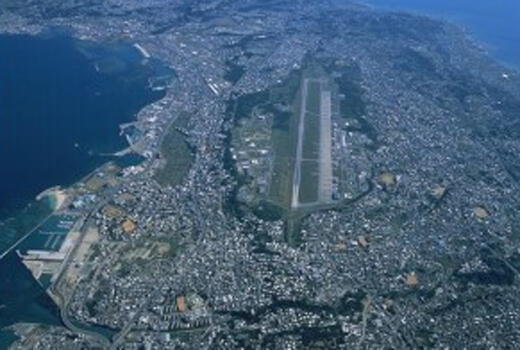 The Futenma base, in the centre of Ginowan, vue du ciel. Photo: Ginowan City.

Photos taken at the protest in Ginowan, near to the Futenma base on May 1. 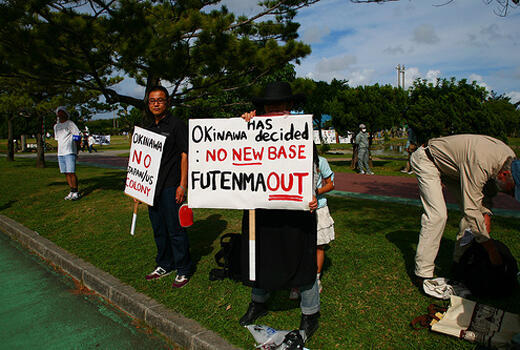 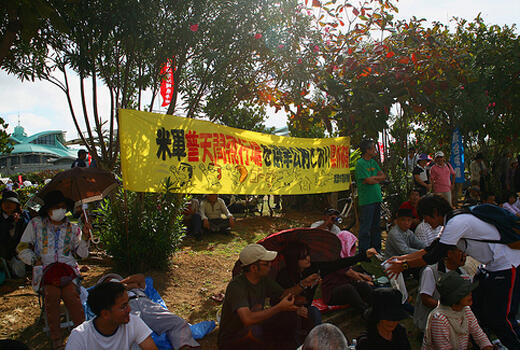 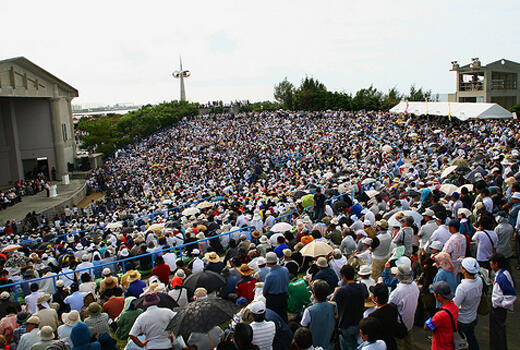 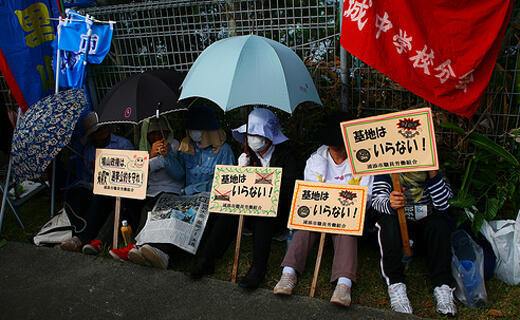 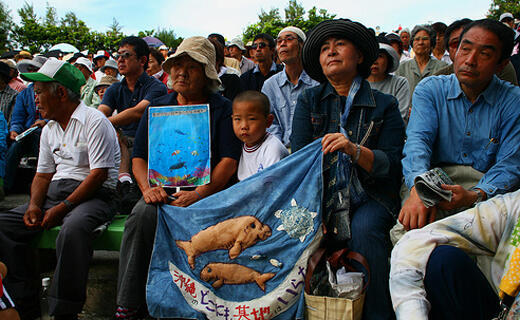 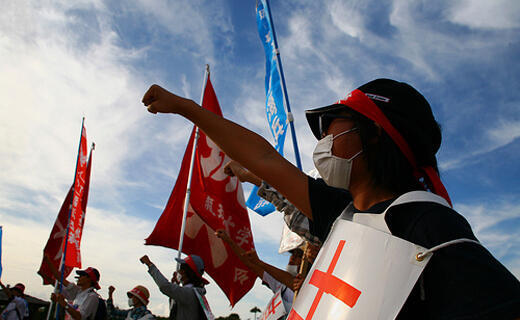 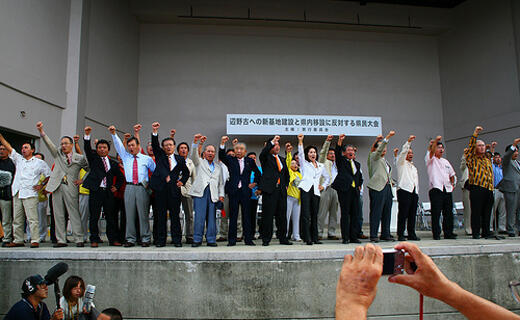 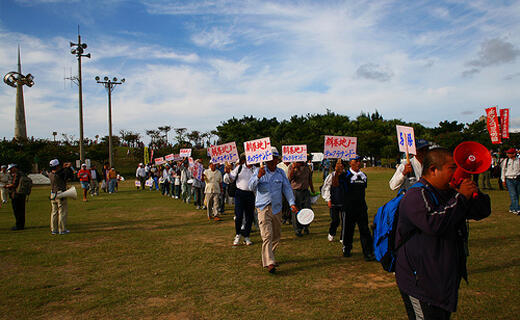 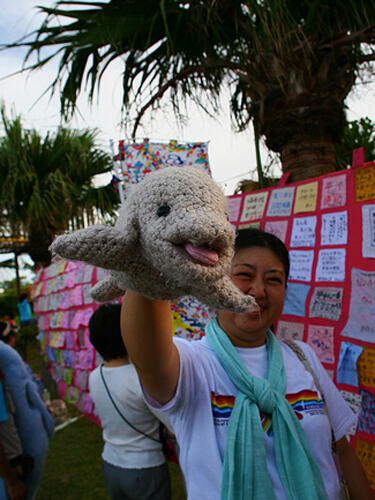 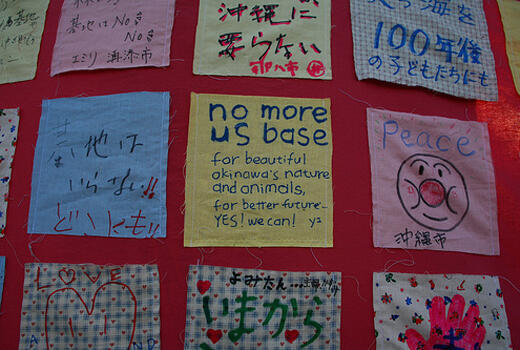 “Okinawa Island is a key spot for the US”

Dan (not his real name) is a member of the US Marine Corps. He's based in Camp Foster, a military base near to Futenma, on Okinawa Island.

The Japanese military is pretty limited and the country has quite a peaceful mindset today. In the US, every police officer has a gun. Here, there's one gun for a whole unit, and it's another one that has the pepper spray. So I think we come in quite useful to them. For example, we're particularly watchful of what's going on in North Korea.

It has to be said that Okinawa Island is a key spot for the US in the Pacific zone. Closing bases here would mean moving 30,000 to 40,000 people; it's a big task; not something you can do overnight. But it's true we don't do much here. We do daily training exercises and often go off to train in Australia, Thailand etc., My work is mainly a computer job.

I went along to the demonstration and spoke to some of the locals. They told me that what bothers them most is the noise of the fighter planes taking off and landing. Another big issue, which I do understand, is that the base takes up a massive amount of space, leaving the town overcrowded.

The government talked about moving the base to Henoko in the north of the island, but the residents opposed the idea because the suggested spot was on the coast next to where dugongs live [mammals related to the manatee whose population is decreasing].

On the whole, the island is divided about the base. Some say that for economic reasons it's better that we stay because we bring a lot of money to the area [40,000 Americans - soldiers and their families - live on the island]. But others want us to go because they think we're monsters. It's true that a few of us have done some stupid things [Close the Base has a list of accidents and criminals cases on its website]. There are some who think we're all drunks who go around stabbing taxi drivers.

But the ones who do are a minority. I walk around outside the base every day and I've never met anyway who's told me to ‘go home'. The press reported that tens of thousands of people came to demonstrate on May 1, but I don't think there were any more than six or seven thousand."