A British woman was deported from Dubai on Friday for allegedly kissing a man on the mouth in public - a harsh reminder to the two million expats living in Dubai that a kiss can land them in prison. Read more...

A British woman was deported from Dubai on Friday for allegedly kissing a man on the mouth in public - a harsh reminder to the two million expats living in Dubai that a kiss can land them in prison.

The 26-year-old and her co-accused had their appeal upheld on 4 April after a woman accused them of kissing in a restaurant in the Gulf state. Charlotte Adams, who has now been expelled after completing her sentence, has accused Dubai of "hypocrisy" since her deportation.

The 26-year-old told a tabloid newspaper that hotels offer free alcohol to guests despite the fact that being drunk in public is considered an offence. She said "the laws need to evolve to match the culture here".

Hers is the not the first case of its kind: in September 2008, a British couple were deported for having sex on a beach, after avoiding sentences of three months in jail.

Last year alone, the Dubai police arrested 6,000 people for breaking the "code of conduct". The document, published by the executive council of Dubai, states: "Holding hands for married couples is tolerated but kissing and petting are considered an offence to public decency. (...) Beachgoers shall wear conservative swimwear (...) nudity is strictly forbidden and is liable to be punished by imprisonment or deportation".

On a public beach in Dubai. Photo posted 29 March 2009 on Flickr by Ben Visbeek. 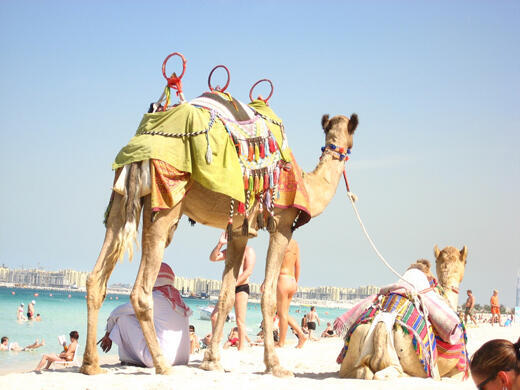 Laurence Tissot is a French expat who's been living in the UAE for two years. She's a photographer and blogger.

I live two minutes from the beach. When I pass by, I'm often shocked to see tourists walking along in thong bikinis. I have to say that you rarely see locals sat next to tourists however; they don't want to have to look at all that bare flesh. They tend to come to the beach later, at sunset.

I think that the rules on the beach are quite flexible. In shopping centres they're stricter. I was asked by police officers to cover my shoulders once when I was wearing a sleeveless top. But in general, they punish brazenness more than cool clothing." 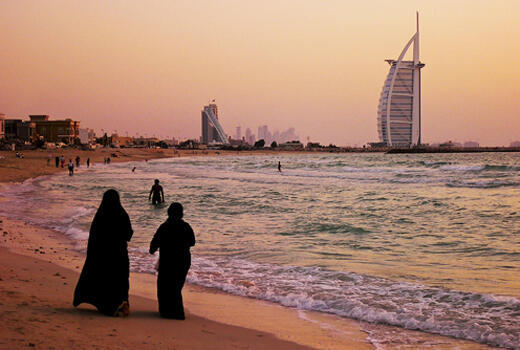 Emirati women prefer to come to the beach at sunset. Photo posted 7 May 2008 on Flickr by Karim Iliya.

“It’s not only the tiny bikinis, but that they kiss and pet in public”

Lubna Abdulaziz is Emirati. She works in a bank in Dubai.

We're not usually offended by the behaviour of Westerners, but for around five years, it seems like they've become really careless. You see them in a shopping centre in really short shorts, or with a bare midriff, revealing a belly button piercing. A few months ago I got stuck in a hotel lift with two Europeans who were all over each other, oblivious to me, wearing the traditional abaya [black veil which covers the entire body, usually accompanied by a headscarf - see photos].

Emirati people travel a lot and we're open to different cultures and ways of living. Our beaches are almost all mixed except for a few private clubs reserved for women. But some of the Western women who sunbathe on our beaches we find offensive. It's not only the tiny bikinis, but that they kiss and pet in public. It's the tourists more than the expats, who have been here longer and are respectful of our customs.

When the British couple were deported for having sex on the beach in 2008, many of my expat colleagues were really shocked. I took the opportunity to give them some advice about how you are supposed to act in public here."