Two Saudi poachers who posted an amateur video of themselves illegally hunting gazelles are now being hunted down themselves - by the authorities. Not only did the pair use rifles which are banned for hunting, but they killed animals of an endangered species, and on a nature reserve. Read more and see the clip...

Two Saudi poachers who posted an amateur video of themselves illegally hunting gazelles are now being hunted down themselves - by the authorities. Not only did the pair use rifles which are banned for hunters - but the animals they killed were of an endangered species, and on a nature reserve.

The poachers happily show off their catch while the car radio plays a popular Saudi song in the background. On the men's shoulders hang sniper rifles - banned for hunting purposes in Saudi Arabia. The clip is entitled "Defying the nature reserve".

The general secretary of the National Commission for Wildlife Conservation and Development, prince Bandar bin Mohammed al-Saud, has called on witnesses to come forward in helping to arrest the pair. He admitted however that his organisation had known about the video for two months, but did not want to publicise the issue. It was only when the Saudi Web became enflamed with the subject that an appeal for witnesses was issued.

According to local media, the poachers speak in a dialect from a region near Riyadh. They believe that the video was probably filmed in the Uruq Bani Ma'arid nature reserve, situated nearby. The reserve was established in 1994 and covers almost 12,000 km2 in an area called Rub al-Khali (literally, the "empty quarter"), one of the world's largest sand deserts.

On Monday, the Al-Watan newspaper reported that one of the pair was arrested on Friday 16 April.

Hunting is strictly regulated in Saudi Arabia. An official decree states the times of year in which hunting is permitted (outside nature reserves and inhabited areas). Despite this, some species have become increasingly scarce over the past few years. Weasels, turtleneck doves, nightingales, foxes, wolves and even hedgehogs are among those whose numbers have dwindled.

Some five years ago TV awareness campaigns about the issue stopped, and since then, poaching has increased steadily. At the beginning of spring and the end of autumn, when migratory birds are beginning or ending their journeys, there is a surge in hunting activity.

Poachers are usually of Bedouin origin [traditionally nomadic], a people which has no environmental conscience. Hunting is an integral part of their customs. They steal away in hideouts in the nature reserves and compete between each other for the biggest number of rare animals. It's a pride thing for them.

Of course, the quality of the meat is also a determining factor. Gazelle meat is delicious. Some people breed them for the high price they can get. A young gazelle will sell for 4,000 riyals (785 euros), and a fully grown one for 8,000 riyals (1,570 euros)." 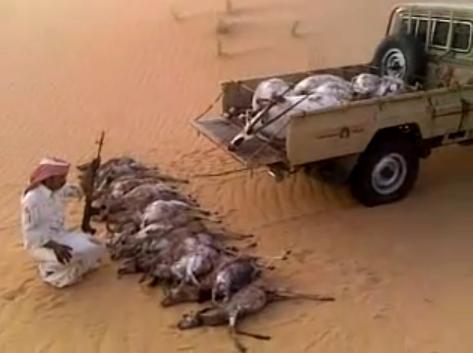