The dizzying dance of whirling dervishes has its roots in traditional Sufi spirituality, yet recent representations of it seem to have lost part of their meaning. From Cairo to Istanbul, shows mingling the spinning skirts of dervishes with the bare flesh of belly-dancers attract tourists with an odd mix of religion and sensuality.

The dizzying dance of whirling dervishes has its roots in Sufism, a mystical branch of Islam. Yet in recent years, dervish performances seem to have lost their spiritual element. From Cairo to Istanbul, shows are now mingling the spinning skirts of dervishes with belly-dancing… nowadays the whirling dervish performances seem to be less about spreading a mystical message than attracting tourists and party-goers.

Sufi whirling is a type of meditation practiced by dervishes, the followers of Jalal ad-Din Rumi, an influential 13th century Persian Islamic jurist and theologian who founded the Sufi Mawlawi order in Konya (current day Turkey). Under the Ottoman Empire, the movement spread to Syria, Egypt and even the Balkans.

For Sufi dervishes, whirling is a method for reaching the source of all perfection by focusing on the rhythm of the dance and abandoning one’s personal desires. Dervishes spin in repetitive circles faster and faster until they reach a sort of spiritual trance.

During the 1925 Turkish revolution, Ataturk outlawed all Sufi gatherings and organisations. The practices survived in secret until it was legalized once more in 1952.

A "dervish" performs in a glow-in-the-dark skirt

Whirling dervish in a glow in the dark skirt at an Egypt birthday party. Video published by captramy, on November 21, 2008.

Amer el-Tony and his dance company. Video published on YouTube by emodedo on March 13, 2010.

Amer el-Tony and his dance company. Video published on YouTube by mokhtar2010, on November 18, 2008. 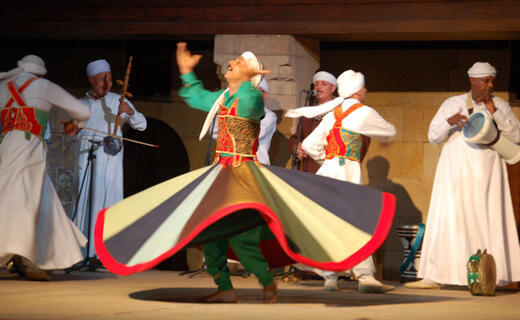 Cairo whirling dervish in a trance. Photo published on Flickr by Sebastian Niedlich.

"How do you expect to draw in cosmic energy with belly-dancers sashaying around you?"

Amer el-Tony is the founder and singer for the Egypt Mawlawi dance company.

Spinning is at the very root of life. Everything goes in circles: the blood flowing though our veins, the Earth in its orbit, the planets around the Sun… Spinning is intimately linked to life, and our dance merely expresses that, to free the soul and uplift the body.

When we dance, we try to express what brings all religions together. We say: 'We may be different, but we all agree on the Unique [i.e. God]. Whatever your religious belief, you celebrate the Almighty'. Even some of our musicians are Christian. Our goal is to overcome the differences between different religions, and to get closer to God using cosmic energy through our dancing. Many spectators come to thank us at the end of the show, saying our performance reinvigorated them and gave them a feeling of well-being.

We’ve noticed people imitating our performances in recent years and distorting its meaning: they wear multicoloured skirts, use flashing lights, and turn the shows into commercial stunts. What they show is just an empty shell. They favour material goods over spiritual well-being. How do you expect to draw in cosmic energy with half-naked belly-dancers sashaying around you? To try to rein in this phenomenon, we’ve been doing more and more shows in Egypt, even for free. For us, it is very important that the spiritual tradition of Sufi spinning lives on."

Dervish and belly-dancer show in Greece

Show in Greece including several belly-dancers and a whirling "dervish". Video posted on YouTube by htsoupaki, on September 11, 2007.