On March 24 and 25, hundreds of French-speaking Mauritanian students staged a protest at the University of Nouakchott to protest government plans to "arabize" the county’s school system and administration. According to the students, the march degenerated into a violent riot after police barred them from exiting the university compound and fired teargas into the building.

On March 24, hundreds of French-speaking Mauritanian students staged a protest at the University of Nouakchott to protest government plans to "arabize" (switch from French to Arabic) the country’s school system and administration. According to the students, the march degenerated into a violent riot after police barred them from exiting the university compound and fired teargas into the building.

Tensions between the proponents of a fully arabized Mauritanian society and a minority of French-speaking Mauritanians have existed since the country gained its independence from France in 1960. For the past 50 years, the state has had to deal with the conflicting interests of the Arabic-speaking majority, of Moorish descent, and that of various black African minorities, whose common language is French.

The increasingly nationalistic climate that led to a first military coup in 1978 prompted the military government to launch a massive pro-Arabic campaign in the country’s schools and administration, sparking angry reactions from the black African population. To calm their fears, a "double curriculum" system, in Arabic for the Moorish majority and French for the black African minorities, was established. The resulting system was costly and unfair, resulting in the educational inequalities between Arabic and French-speaking students. In 1999, the government launched a fifth linguistic reform requiring all students to take courses in both French and Arabic (science and math courses in French, and literature and social science in Arabic).

A recent speech by Prime Minister Moulaye Ould Modhamed Laghdaf, in which he announced that official Mauritanian documents would from then on be written in Arabic and not French was met with anger by part of the Francophone minority. Several hundred students decided to hold a protest on March 24 to denounce what they see as a discriminatory act against black minorities. 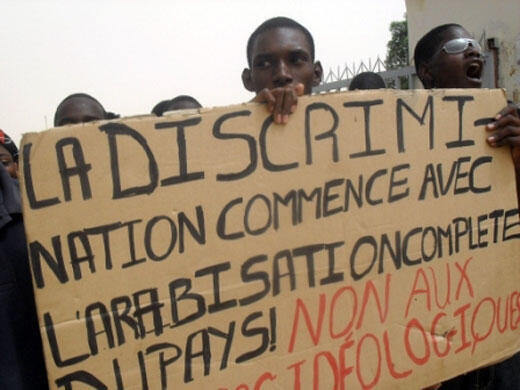 French-speaking students protest at the University of Nouakchott on March 24. The sign reads: "Discrimination begins with the total arabization of the country". Photo sent by Alassane. 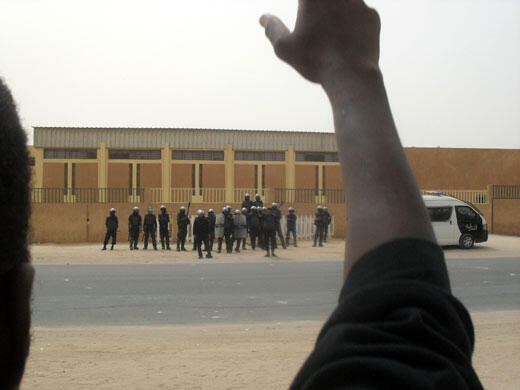 According to the students, police barred them from exiting the campus before firing teargas into the university. Photo sent by Alassane. 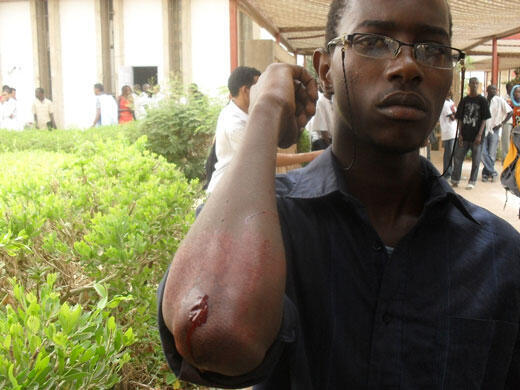 Some students were injured in the ensuing scuffle. Photo sent by Alassane.

"I don’t think this reform is discriminatory"

Ebada Ould Eljouneide is a high school teacher and works for Mauritania's education ministry. Of Moorish descent, he defends a bilingual educational system for all.

The 'double curriculum' system was a disaster: it led to a system where different Arabs and blacks living in the same country couldn’t even understand each other; it was just absurd. I consider that the reform that divided school subjects between the two languages was fairer and less costly. Arabic is our official language, and French is our language for dealing with the rest of the world. Both blacks and Arabs should learn at least the basics of both languages.

The prime minister’s announcement that the administration will switch official documents to Arabic is nothing new, so I’m surprised it sparked protests. That reform has been in the air for a while, and it makes complete sense in my view: what other country writes its official documents in a language other than its official language? It’s a reform that the Arabic-speaking majority has been asking for for a long time. I don’t see it as discriminatory; I see it as a previous injustice being fixed."

"We fear that eventually, French will disappear"

Alassane is a student at the University of Nouakchott. As a black African and French-speaking citizen, he is opposed to his government’s arabization plans.

We French-speaking students are opposed to the new arabization measures announced by the prime minister. We’re also concerned by the culture minister’s [Cissé Mint Cheikh Ould Boidé] remarks on French and African dialects being an 'obstacle' to Arabic expansion – we consider this discriminating towards the non-Arabic people. I believe that we Francophone students represent the discriminated black race, we have a duty to speak out. We fear that eventually, French will disappear from school curriculum entirely, or only be taught as a foreign language.

We were shocked by the brutality of the police repression on March 24. Not only did they bar us from exiting the university campus, but they also fired teargas grenades into the science and technology building, where many protesters were gathered. Several students were injured. The situation between the Moorish community and black Africans is tense enough as it is; police repression is only adding fuel to the fire.

We think that arabization policies will degrade the quality of our educational system and isolate Mauritania on the international scene. All of our neighbours are French-speaking countries, and even Arab states don’t use Arabic as their working language."