Just before midnight on Saturday, a volcano erupted beneath the Eyjafjallajokull glacier in the southwest of the country, prompting the immediate evacuation of more than 500 residents. One of our Observers was there. Read more and see the photos...

Just before midnight on Saturday, a volcano erupted beneath the Eyjafjallajokull glacier in the southwest of the country, prompting the immediate evacuation of more than 500 residents.

The volcano, located 125 km from the capital, Reykjavik, started spewing smoke and lava at 11.30pm (local time) on Saturday night. The eruptions reached temperatures of up to 1,000°C and heights of up to 200 metres. Lava streams spewed 500 metres down the mountain. It was the first eruption in the area in almost 200 years.

Fearing glacial floods, the authorities ordered the evacuation of hundreds of nearby residents. The alert was lifted on Monday, but scientists have warned that increased activity could trigger a more powerful eruption. There are also concerns that the nearby Katla volcano, considered the island's most powerful, could be stirred into action. 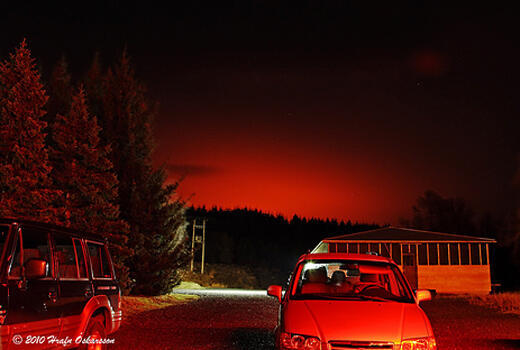 Photo posted on Flickr by Posted onHrafn Óskarsson In front of his home at 3:37am.

Footage filmed by Icelandic coastguards. Posted on YouTube by "aeqox".

“The authorities are taking a lot of precautions”

Örvar Atli Þorgeirsson is from Hafnarfjörður, 30 kilometres from the volcano. He photographed the eruption.

The eruption took place on a popular hiking route over Fimmvörðuháls. Luckily it is where the glacier is very thin so no destructive flash floods came rushing down the mountainside.

When I arrived at the scene around dinner time on Sunday the weather was really foul; heavy rain and strong winds meant none of the mountains were visible. I decided to drive further into the mountains to see if things would get better. It started to clear up as the sun went down. It was an awesome sight. I have never seen an erupting volcano before. I am restless now, I want to go again and this time closer.

This shot was taken at Syðra Fjallabaksleið, which is a mountain road leading into Fjallabak. The road is now closed to all traffic as rivers from the volcano have started to swell.

Most people have been able to return home but people from the areas most at risk of flooding are still under evacuation. The authorities are taking a lot of precautions but people aren't panicking."