The Iraqi city of Ur: a cradle of civilisation, an archaeological landmark and, according to the bible, the birthplace of Father Abraham. For six years Iraqis themselves were banned from visiting the site, while hoards of American soldiers and other coalition forces were being bussed in daily.

Australian troops in Iraq. Image from YouTube video posted by "ratiniraq" on 12 January 2007.

The Iraqi city of Ur: a cradle of civilisation, an archaeological landmark and, according to the bible, the birthplace of Father Abraham. For six years Iraqis themselves were banned from visiting the site, while hoards of American soldiers and other coalition forces were being bussed in daily.

The Sumerian city, situated near to Nassiriya, 380km from Baghdad, goes back 4,500 years. It's there that the oldest cuneiform tablet known to humanity saw the light of day. But the city in its entirety is yet to be discovered; the excavations carried out by British and American archaeologists in the 19th and 20th centuries revealed only 20 percent of what once existed. Some Iraqi and foreign archaeologists believe that the site, if fully excavated and restored, could outdo the Egyptian pyramids in historic importance.

Under Saddam Hussein's rule, an air base was built not far from Ur's grand 'ziggurat', a temple built for the goddess of the moon, Nana. The decision was denounced by UNESCO in 1985, after cracks appeared in the wall of the temple as a result of vibrations caused by fighter planes.

In 1991, the base was destroyed by American forces. They returned in 2003, this time turning it into a base of their own. It was at this point that they took hold of the city of Ur too, banning Iraqis from visiting. Although they remain in the nearby base, they handed the city itself back to Iraqis in April 2009. 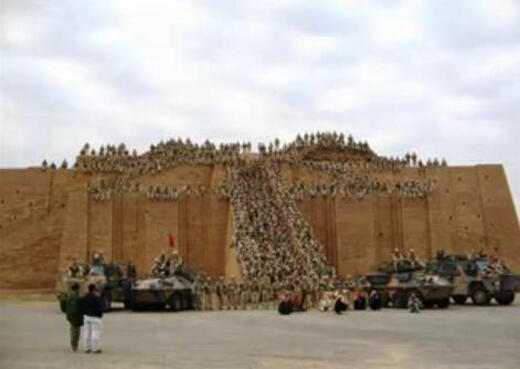 “Coming under US occupation is what saved it from being destroyed”

Franco d'Agostino is an archaeologist specialised in Mesopotamia (the region considered the cradle of civilisation, in which Ur is located). He has visited Ur several times and acquired accreditation from the Iraqi authorities to begin the first archaeological dig since Saddam was ousted.

Until last April, the ziggurat came under the US forces' ‘Camp Adder'. I think that's what saved it from being destroyed. You'd think it would have had the opposite effect. Take the archaeological site of Babylon for example, where Saddam had built one of his villas. That was destroyed by American and Polish troops when they turned it into barracks.

When it comes to the authorities and national heritage in Iraq, the relationship's never been an easy one. When the Iraqis built their air base near Ur they destroyed a part of the site. And then destroyed another part, at the end of the nineties, in order to be able to build a helicopter landing pad for the pope to arrive on [Pope Jean Paul II's visit, planned for the year 2000, was cancelled in the end due to security risks]. The pope wanted to visit the city because it was thought of as the birthplace of Prophet Abraham, even if there's no archaeological proof of this.

Many areas in Iraq have been pillaged and antiques sold to buyers in Switzerland, London, the US and Japan. But Ur hasn't suffered too badly in this sense, simply because there isn't a great deal to take away. That doesn't minimise the importance of this magnificent site. Iraq is the only country in the region which has ziggurats, and Ur is the best conserved one.

While there's currently no archaeological work being undertaken in Ur, we are in the process of setting up a project involving Italian, American and British researchers."

Kassib and family visiting Ur 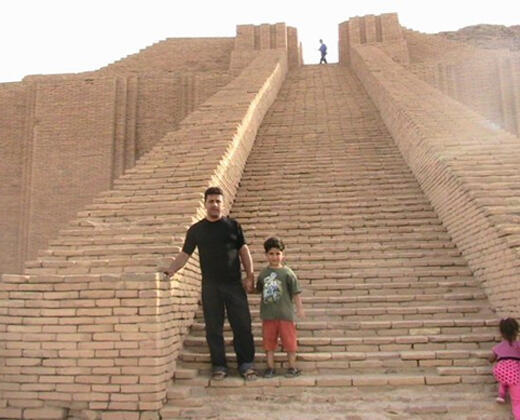 Kassib al-Naiima is from Nassiriya but currently lives in Sweden. He was one of the first Iraqis to visit Ur after the withdrawal of US troops.

During the 1990s, the site was completely abandoned in the middle of the desert. Then it became a military zone during the US occupation; prohibited for Iraqis to visit. Masses of American soldiers went to visit the site during that time. You can see that by the amount of graffiti left on the walls.

The site is not well protected enough. Only a few Iraqi policemen keep guard and there's only a little barrier a kilometre from the ziggurat. People are scared of going there in case they get kidnapped or robbed. At night, there's no light whatsoever.

A number of Sumerian sites have been pillaged in the north of Nassiriya. When I was there, a young man who noticed that I had a Swedish number plate came over and started trying to sell me antiques from Ur. Shocked, I told him that he had stolen pieces of national heritage. He told me that he had no other means of earning money and that he had already sold stuff to American soldiers that had visited the site." 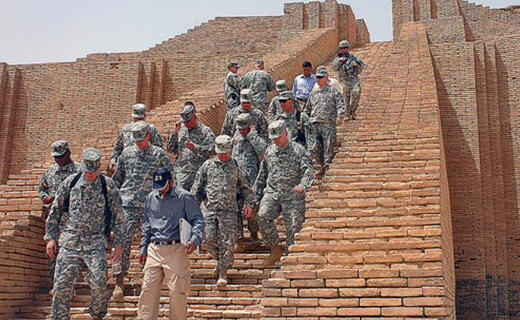