Holi is a spring Hindu festival celebrated in north India, well known around the world as an extravagant celebration of colours. But lesser-known is that it’s also traditionally celebrated with marijuana milkshakes.

Holi is a spring Hindu festival celebrated in north India, well known around the world as an extravagant celebration of colours. But lesser-known is that it’s also traditionally celebrated with marijuana milkshakes.

The March festival (the exact date depends on the lunar calendar) is an occasion for men, women and children to play wildly with water guns and coloured powder. The partying also includes a drink that’s traditionally made with cannabis, which is technically illegal in India.

"Bhang thandai"- an almond-flavoured milkshake blended with cannabis - is widely served, from upper class private parties to street revelries. On this particular day, its use is completely acceptable for all adults, from youths to parents and grandparents.

While India is a signatory to a 1961 UN convention essentially banning cannabis, the substance has always been been part of the country's cultural heritage. Bhang is sold for consumption through government licensed outlets.

Bhang preparation during the festival. Posted on YouTube by akalmaut

"For me, Holi is all about being a kid again"

Rahul Verghese is a Gurgaon-based entrepreneur.

I come from a mixed family - my wife is Hindu, I'm Christian. For me, Holi is all about being a kid again, shedding your inhibitions, getting colours all on you, generally having a good time.

In our little colony, we have 70 odd homes, and we have a little celebration with food, drinks and bhang. It tastes smooth, and doesn't hit you initially, but a little later you're knocked out.

I personally don't really have it, apart from one taste I had a long time back... that's just me, I'd rather be sane and sober while having fun.

Here we had a guy making it in a matka, (an eartherware pot), and it was served around on a tray by one of the guys."

A modern Holi oudoor party and concert. Photo by Gagandeep Gill on his website. 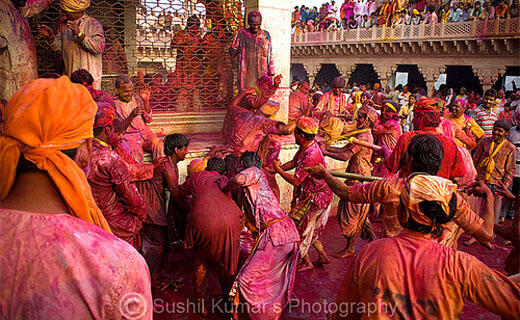 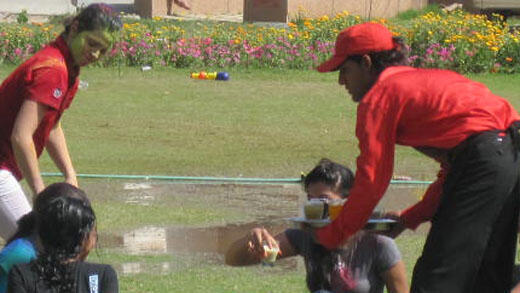 Bhang and other drinks freely available in a Holi garden party. Photo by R. Verghese.

Holi in urban areas is more and more a reason for family and friends to gather and drink. Though playing with colours is still quite prevalent, there's a lot of awareness on the type of colours you play with nowadays.

The festival is only celebrated in the north of India and virtually absent in the south. So your participation all depends on which geographical region you represent.

At places, the revelry becomes rowdy and violent. Not just bhang, Holi is also associated with heightened guzzling of alcohol. Marijuana is not legal in India, but the tradition of having bhang during Holi is that it has a religious association. According to popular legends, bhang preparations were offered to gods and was a popular fare particularly for Lord Shiv. There's no exact connection with Holi, but it's associated with it.

I know of shops selling bhang served with thandai (a combination of milk, almonds, cardamom) and sweets among other eatables. Cannabis is traditionally smoked with tobacco or eaten in the form of pakkoras or even sweets."