Saudi women sick of being forced to buy underwear from men

Almost the entirety of Saudi Arabia's sales positions are held by men, making shopping for underwear a somewhat uncomfortable experience for women. In an attempt to reverse the trend, a group of exasperated Saudis tried to take control of the lingerie business. Did they succeed? Read more...

Almost the entirety of Saudi Arabia's sales positions are held by men, making shopping for underwear a somewhat uncomfortable experience for women. In an attempt to reverse the trend, a group of exasperated Saudis tried to take control of the lingerie business. Did they succeed?

On February 13, a financial analyst and blogger from Jeddah, Reem Asaad, launched a campaign called "No to underwear salesMEN in Saudi Arabia". She called on shoppers to boycott lingerie shops across the country until the government agreed to enforce a law which allows women to work in the shops (Article 8 of decree N120).

The law, put forward by the left-leaning current labour minister, Ghazi al-Qusaibi, was passed in 2006. It specified that all lingerie salesmen should be replaced by saleswomen within a year. But faced with pressure from Saudi clerics and conservative forces opposed to women mixing with men in the workplace, the majority of shops ignored the new law.

Asaad's boycott, which lasted for two weeks, did not succeed. Lingerie store owners argued that shops where women worked would be prohibited for men - a woman selling something to a man is seen very badly in Saudi Arabia - and that it would mean added costs to the businesses. Opaque windows would have to be installed, for example, so that male customers couldn't see the saleswomen inside. 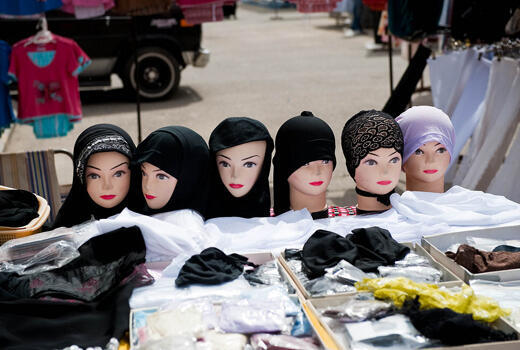 A lingerie stall in the Qatif market, in the east of the country. Women are only allowed to sell baskets or handcrafted goods. Clothes and underwear stalls are run exclusively by men.

Eman Al Nafjan is an English teacher and blogger from Riyadh. She writes the blog Saudiwoman.

The contradiction is in the fact that we are supposedly the most conservative nation in the world and yet women here divulge their bra and undies sizes and colours to strange men on a regular basis. I have been to many countries, European, Arab...etc and I have yet to come across a lingerie shop or even section of a department store where a man is employed to help customers. Why is this? Because common decency and personal comfort dictate that the majority of women would much rather discuss and buy their underwear from another woman. This very simple fact somehow flew over our muttawas' [religious policemen] heads or they just felt that the oppression of women is more important than preserving a woman's modesty.

The labour minsiter, Dr. Al Qusaibi, attempted to tackle this issue by issuing a new law that only women were to be employed at lingerie shops. This was supposed to be effective in 2006. However, powerful people behind the scenes have been able to delay its implementation. Why would they do that? Well it's due to a multiple number of reasons:

1-     Many are muttawa and strongly believe that malls and shopping areas are tools of the devil. Hence, if they could, they would even ban women from shopping, let alone working there.

2-     It costs money to get lingerie shops run by women ‘muttawa compliant', what with screens on the windows and a guard at the door...etc.

3-     Women employees are more expensive. Saudi women are paid more and work shorter hours while men brought in from poorer countries will work longer, for less.

4-     They just hate Dr. Al Qusaibi and his ‘liberal' ways and want to oppose him in anything and everything."

“Why is it okay for women to make purchases from salesmen in stores, but not for men purchasing from saleswomen?”

Susie is an American expat who lives in Jeddah. She writes the blog "Susie's big adventure".

So what's the problem with hiring salesWOMEN for these jobs? Well, for starters, business owners claim that it would just cost too much. If only women are allowed into a shop, shop windows must prevent visibility into the shop. And then the business owners claim that they cannot have window displays which would attract customers if the windows have to be blocked. Why can't the business owners have their attractive window displays and merely hang a curtain behind the display which would prevent people on the outside from seeing customers inside the store?

Business owners also complain that if they hired salesWOMEN, they would also have to hire a guard for protection to ensure that men stay out of the shop, which is an added expense. Which brings me to yet another flimsy excuse for not hiring salesWOMEN in lingerie shops - because of the strict segregation of the sexes here. Men and women are not allowed to mix socially in this society. I personally do not understand what all this hubbub is about - allowing both men and women into a shop at the same time? It happens everywhere in this country anyway. Both men and women shop together in grocery stores and malls. And why is it okay for women to make purchases from salesmen in stores, yet there's a big stink about men purchasing from saleswomen? What's the difference if a man purchases items from a woman, or a woman from a man? There is a certain amount of interaction either way. I just don't get this type of inconsistent reasoning.

Intimate apparel business owners who have tried hiring salesWOMEN are also complaining that they've experienced a high turnover rate and that the saleswomen are incompetent. Rubbish! Poppycock! First of all, make it easier for women to get to work in the first place by allowing them to drive. Having to pay for a driver or a taxi unfairly cuts into a woman's salary. Train salesWOMEN to sell undergarments and just watch them flourish. 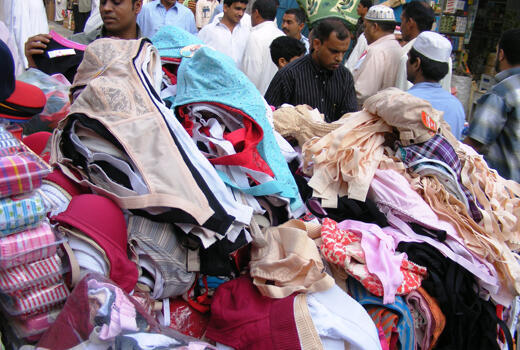 A market in Jeddah. Photo by Susie. 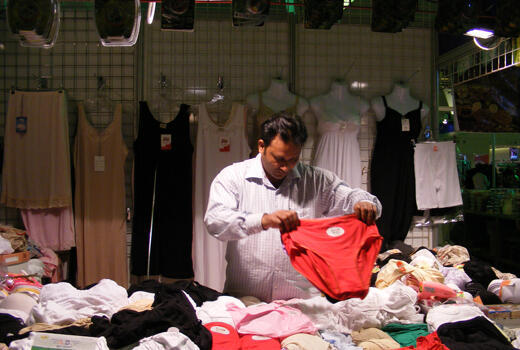 A shop in Jeddah. Photo by Susie.