This Sunday, Iraqis vote for a new parliament. Our Observers from diverse regions and political views talk to us about things they’ve seen during the campaign that are amusing, surprising or just plain irritating.

An election poster in Baghdad, victim to a spray of red ink. Photo: Ali al-Mousawi.

This Sunday, Iraqis vote for a new parliament. Our Observers from diverse regions and political views talk to us about things they’ve seen during the campaign that are amusing, surprising or just plain irritating.

The parliamentary elections on March 7 are the second such polls since the fall of Saddam Hussein’s regime in 2003. A key test for the country's fledgling democracy, they take place against a backdrop of rising violence and the looming withdrawal of US troops.

Hawagin Mulla Amin is a writer and a professor at the University of Al-Sulaymaniya in Iraqi Kurdistan.

The atmosphere here is electric and election parties happen everyday in the streets and in community centres. The candidates invite their supporters and the most influential people, those who can lend them their voices. Popular singers animate these parties and strike up anthems, entire electoral campaigns in song, to the glory of the electoral list paying them. During these parties, we dance the Halparke, a collective dance with men or women in traditional costume".

Supporters dance the traditional Kurdish Halparke at the foot of the old citadel of Kirkuk. Photo: Hawre Khalid, published on the Institute for war and peace reporting website.

“The voters don’t know the large majority of candidates”

The election posters are stuck everywhere: on electricity poles, bridges, walls, no place has escaped. The voters don’t know the large majority of candidates. For this reason, they don’t hesitate in sticking up an enormous number of posters in hope that their faces become familiar."

A mess of election posters in Baghdad. Photo: Ali al-Mousawi.

Ahmet Hasim is a Turkmen journalist in Kirkuk.

The election posters of Prime Minister Nuri Al-Maliki spark surprise among Iraqis. He’s been in power for years and his slogan calls for… change. But what will he change then? Himself?" 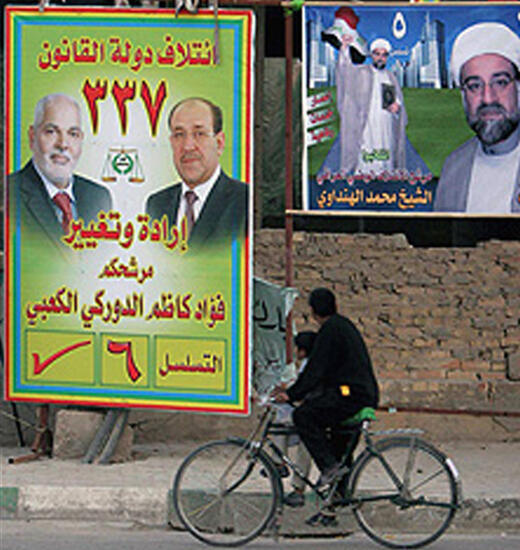 A poster for Prime Minister Nouri al-Maliki's party list in Karbala. Photo: Metrography, published on the Institute for war and peace reporting website.

Ali al-Mousawi is a communications student in Baghdad.

Several campaign posters were vandalised. People defaced posters of candidates they didn’t like. On some posters, they poured red ink. Intrigued, I asked around in neighbouring shops. They told me that the supporters of rival parties sprayed the posters with red ink because they thought that the candidates had blood on their hands.

The poster of one candidate, a local radio director in Baghdad. Photo: Ali al-Mousawi.

Posters of candidates in Hilla, in the centre of Iraq. Photo: Ali al-Zubedi, published on the site of the Institute for war and peace reporting.