Saudi Arabia will crown its most beautiful camel on Thursday. But what was once a local custom for desert-based camel breeders, has transformed into a money-driven competition for city-based business owners, turning beautiful camels into goldmines, and the businessmen into celebrities. Read more...

Saudi Arabia will crown its most beautiful camel on Thursday. But what was once a local custom for desert-based camel breeders, has transformed into a money-driven competition for city-based business owners, turning beautiful camels into goldmines, and the businessmen into celebrities.

With 180 human participants, the King Abdel Aziz Festival is the most important meeting of its kind in the Arab world. Launched ten years ago, the prizes have spiralled year on year. This time around, the contest will give away the value of 70 million Saudi riyals (14 million euros) - essentially in cars - to the winners of categories 1, 30, 50 and 100 camels.

The beauties prepare themselves for the contest

Preparing for the festival. Video posted on YouTube by "harbharbful"Dec 19, 2009. 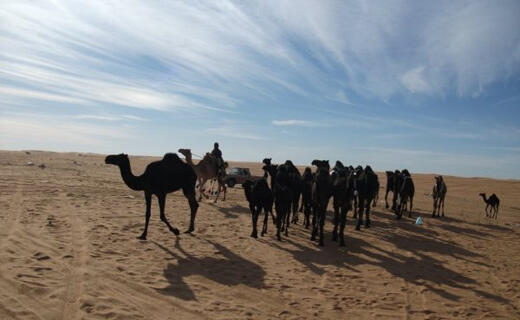 “The firstborn of a previous winner was sold for 2.5 million euros”

Abu Fahd al-Qahtani works for a major company in Riyadh. He has been taking part in the festival, in the town of Um Raqiba, for several years.

The festival lasted almost a month this year. The jury is very strict. You base a camel's beauty on the size of its head; whether its lips cover its teeth, the length of its neck and the roundness of its hump.

Participants come from all over the Gulf (except for Oman), and all over the country (except the south-western mountain region where they don't breed camels). The festival takes place in the desert town of Um Raqiba because it's only 350km from the capital, centrally located and is easily accessible.

My father owns a herd of more than 100 camels but prefers not to take part in the festival; he says it's become too commercial. Increasing numbers of wealthy businessmen are taking part in the festival. Having had worked with real estate they've now turned their attention to the camel contest in looking for fame. If you win, people will recognise you all over the Gulf.

To get hold of the best camels, these investors have no qualms with outbidding their rivals. The firstborn of a previous winner was sold for 12 million riyals (2.5 million euros) last week. That's a massive jump from last year, when the maximum amount spent on a camel was four million (784,000 euros), and ten years ago, the biggest prize at the festival was just 10,000 riyals (2,000 euros). One businessman from Bahrain has been boasting that he spent 100 million riyals (19.5 million euros) on his camels. His only desire - to win the contest and become a celebrity in the region.

The hype has attracted several TV channels, who pay 10,000 riyals for a few minutes of images of camels and owners."

A party organised by one of the contestants to celebrate his arrival in Um Raqiba.Video published on Youtube by "saadalbqami" Feb 11, 2010.