Twenty years after the Gulf War, the clean-up continues

Volunteer Kuwaiti divers have been busily cleaning up their country's polluted seabed for nearly a decade, but the debris they remove is not just an old shoe or tyre. Dozens of guns, canons and shells litter the crystal blue waters surrounding the island of Um al-Maradim. Read more...

Volunteer Kuwaiti divers have been busily cleaning up their country’s polluted seabed for nearly a decade, but the debris they remove is not just old shoes and tyres. Guns, canons and shells litter the crystal blue waters off the island of Um al-Maradim, which served as a military base for the Iraqis during the first Gulf war.

Um al-Maradim's sandy beaches and turquoise lagoons used to be the jewel of the Persian Gulf. But in 1990, Iraqi troops arrived and it became their military base for the invasion of Kuwait. The Iraqi troops dug trenches on the pristine beaches and surrounded the island with barbed wire. The troops surrendered on January 28, 1991, but the small tropical paradise that was Um al-Maradim still bears the scars of their short stay today.

“We have fished up three canons and seven shells”

Walid al-Shatti is vice-president of the Kuwaiti Diver's Association, which has been actively cleaning up Um al-Maradim’s seabed since 1999.

We have pulled up several tons of litter from the waters of Um al-Maradim. The debris was blocking yachts from navigating safely and threatening maritime plants and wildlife. Military debris was especially tricky to handle. When our team locates a sunken piece of military equipment, we signpost it with buoys and take photographs of its location before we alert the Ministry of Defence and coast guard. If we find shells, the Ministry takes over the dangerous de-mining stage.

Um al-Maradim was at the forefront of Iraqi military manoeuvres, to the detriment of its wildlife and seabed. Retreating soldiers poured oil into the sea allegedly as part of a revenge strategy to damage Kuwaitan territory as they they left. The coral reef sustained permanent damage. Weapons and ammunition were dumped by Iraqi military ships as troops fled the island at the end of the war.

In 1999 we pulled up two canons in collaboration with the coast guard. Last year we fished up a third one with the help of divers from the Ministry of Defence. We also found seven shells, which their specialised de-miners blew up underwater." 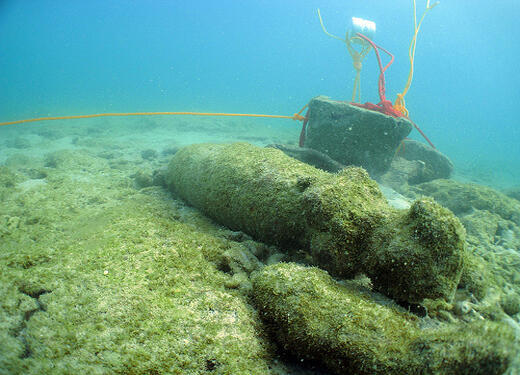 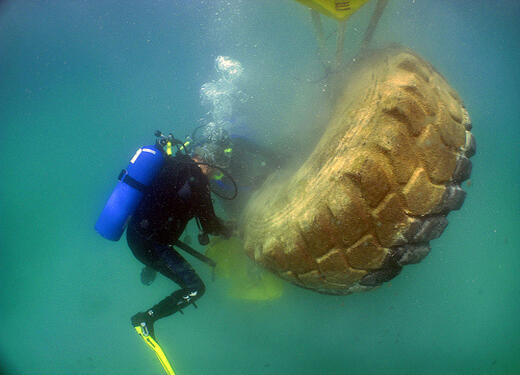 Kuwaiti divers fish up a truck tyre. Photo published on Flickr, on September 13, 2009. 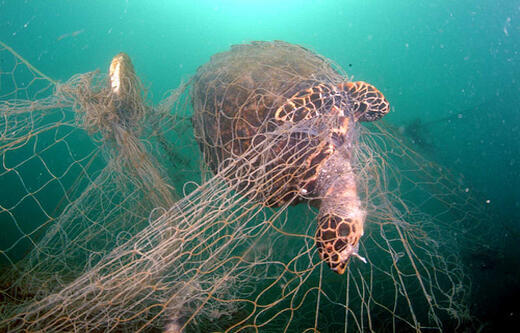 A turtle caught in stray fishing nets, one of the most common elements of debris. Photo published on Flickr, on September 13, 2009.