The World Health Organisations (WHO) estimates that a third of the world's smokers live in China. Cigarette brands are such an integral part of the establishment, that even infant schools carry their names. Read more...

The World Health Organisation (WHO) estimates that a third of the world's smokers live in China. Cigarette brands are such an integral part of the establishment that even infant schools carry their names.

When Mao Tse-tung came into power in 1949, he promised the Chinese people "food, a roof over your heads, and cigarettes".

Thanks to the "Project Hope", a government initiative launched in 1989 in which companies were invited to invest in the country's poorest schools, the Chinese tobacco industry has been benefiting from free advertising in the most impressionable of institutes.

Well, if you're trying to succeed in dying, then it's no exaggeration - the WHO estimates that a million Chinese people die every year from smoking related illnesses. 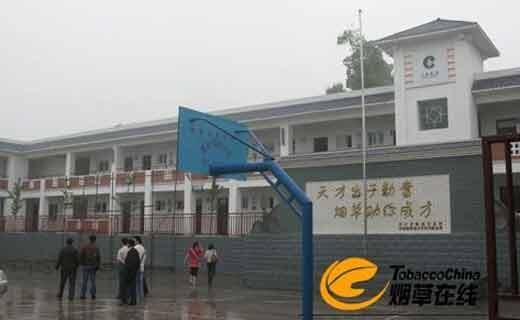 Outside the Sichuan Tobacco Primary School, where the plaque reads "Ingenuity is the fruit of diligence - tobacco will help you succeed". The photo was published on the "Chinese Education News" website educhn.com along with an article entitled "Tobacco promotion plaque on school wall ceases to amaze".

The desired effect for tobacconists

“This type of endorsement goes against our duty to protect children”

Sarah England works in China for the World Health Organisation.

We know that young people are very vulnerable to advertising and for that reason also an ideal target for recruiting new smokers. This type of endorsement goes against our duty to protect children. China ratified the Framework Convention on Tobacco Control [in 2005], which legally binds the country in prohibiting the direct and indirect advertising and sponsorship of tobacco.

Cigarettes are an important part of social custom in China and feature a great deal in the country's history, but that doesn't mean it's not possible to change the social norm. In Western countries nobody thought it possible to ban cigarettes in public places, but today it's very much accepted. Tax on tobacco is minimal in China, so the government could easily increase that tax to raise funds for government projects to reduce tobacco consumption and allow the government to fund the projects that are currently sponsored by tobacco companies.

The Chinese people are not well informed about the dangers of smoking. While in Hong Kong the photographs of smoking damage take up at least 30% of the cigarette packet, in China, there is only a small, written warning which doesn't specify the risks.

At the same time, the speed at which people are dying from smoking in the country is something of an epidemic which is endangering the national economy." 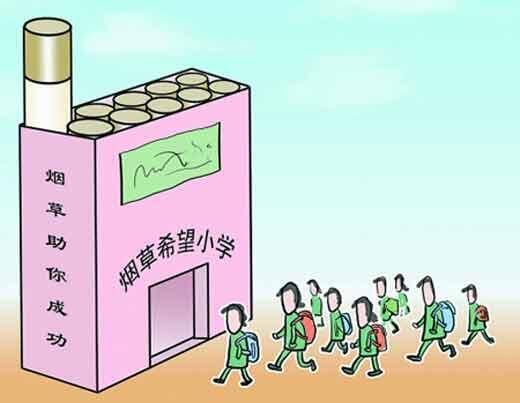 Caricature published on the state news agency website Xinhua, under the title: "The tobacco advertising invasion in schools, under the name Project Hope, is not a joke but a shame".