Veritable works of art patrol the roads around Peshawar and Rawalpindi. The colourful, hand-painted trucks are a source of pride in Pakistan. But for the last few years, the designs have been hijacked by religious groups trying to spread their beliefs. Read more...

Veritable works of art patrol the roads around Peshawar and Rawalpindi. The colourful, hand-painted trucks are a source of pride in Pakistan. But for the last few years, the designs have been hijacked by religious groups trying to spread their beliefs. 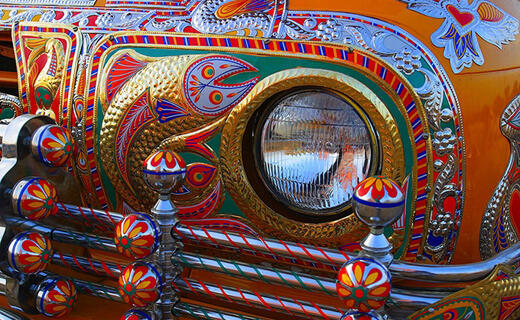 Jamal J. Elias is a professor and chair at the department of religious affairs at the University of Pennsylvania. A researcher of vehicular art in Pakistan, he's the author of a book to be published on the subject ("On Wings of Diesel: Identity, Imagination and Truck Decoration in Pakistan", Oxford: Oneworld Publications).

It's not uncommon around the world for people to decorate vehicles (seen in Latin America, the US, Haiti, parts of Africa, parts of Asia). But in Pakistan, decorated trucks are everywhere. With the exception of trucks belonging to multinational corporations (e.g. UPS, Federal Express), all privately-owned trucks are decorated.

The majority of trucks are bought as used vehicles from Japan, Korea, etc. When they come to Pakistan, their frames are reinforced to carry more weight and their springs are changed. Beyond that, nothing is done to reinforce the brakes, engine or suspension. 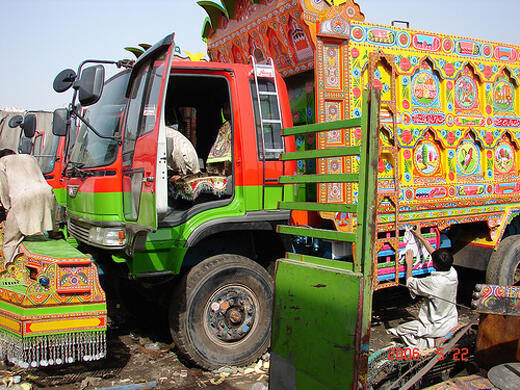 There are regional styles of truck design in Pakistan. The most common is the Rawalpindi or Punjab style in which trucks have ornate metal cowling above the windshield and rely heavily on plastic appliqué in their decoration. The trucks of Swat (north-west of the country) are distinctive for their carved wooden doors and limited use of plastic and hammered metalwork. 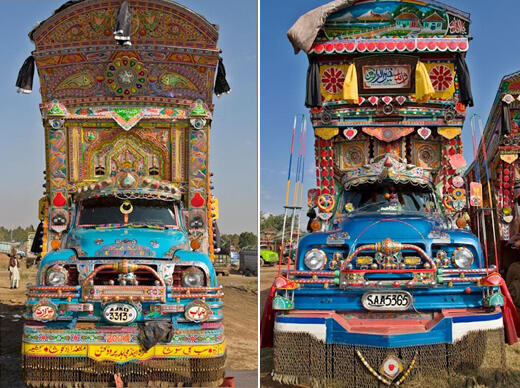 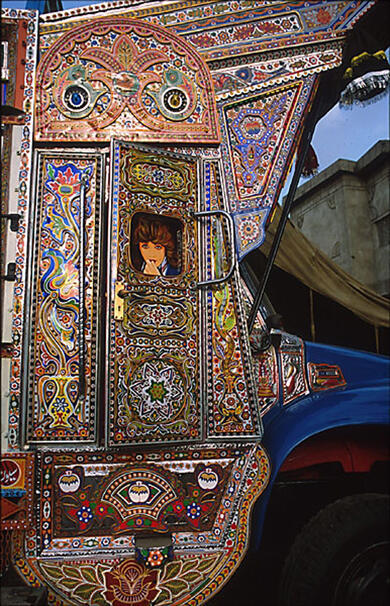 All trucks are ornamented with some combination of epigraphic formulae, poetry, repetitive patterns, landscapes, and figural images (beautiful women, political figures, national heroes etc). Traditionally, the decoration with religious significance is talismanic, in that it protects the truck, its content and the driver from misfortune. But in 2003, a religious Sunni group by the name of Tablighi Jama’at started shifting the syntax of truck decoration to advertise their particular message. This activist attitude is pushing other religious groups (Shiite and other Sunni groups) to respond, thus creating the concept of ‘missionary trucks’.”

The central medallion at the top reads “Ma shaallah” (“As god wishes”). Below on the smaller medallion, "Daawat tabligh zindabad" ("Long live the call of Tabligh!) – referring to the Sunni movement, Tablighi Jama’at. Photo posted on Flickr by Amaia Arozena and Gotzon Iraola, Sep. 21, 2009. 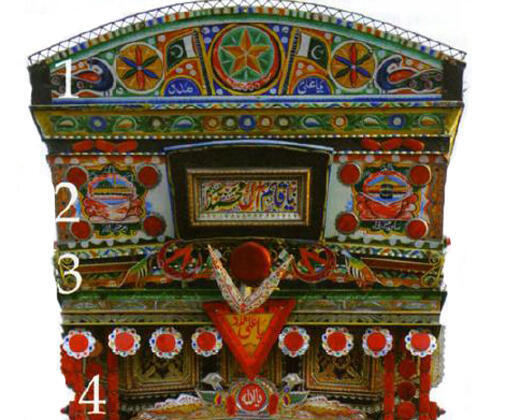 The façade of the truck is peppered with Shiite inscriptions. At the top, “Ya Ali madad!” (“Oh Ali help us”), referring to Ali, founder of Shiite Islam. Secondly, in between the pictures of the Kabaa and the Prophet’s mosque, the names of Ali’s two sons, Hassan and Hussein, and the second and third imams. The central plaque refers to the “last imam”, who Shiite Muslims believe will return one day. Photo: Jamal J. Elias.