No Halloween for “stupid foreigners”

For some years now expats and travellers in Tokyo have been piling into metro carriages on October 31 to celebrate Halloween. This year however, the masked partygoers were stopped in their tracks by groups of exasperated locals.

For some years now expats and travellers in Tokyo have been piling into metro carriages on October 31 to celebrate Halloween. This year however, the masked partygoers were stopped in their tracks by groups of exasperated locals.

As has become the tradition, the event was advertised on an online forum, GaijinPot (gaijin means foreigner in Japanese). The open invitation asked participants to board the 21:06 train on the Yamanote line at Shinjuku station. The instructions are simple: "Wear a costume, sing, share booze, talk to strangers, dance and take photos".

When they arrived on Saturday night however, a group of nationalist activists were waiting to greet the "gaijin". Their message was clear. One board reads "Get out stupid foreigners". Others were even less polite and even more politically incorrect (see photos below). Their efforts seem to have worked. According to Japan Probe, no more than 15 dressed-up foreigners got on the train.

Samurai Dave is an American expat currently teaching English in Tokyo. He recounted his first "Yamanote Halloween Party" in 2006 on his blog.

On a particular Saturday night in late October at a particular station in the heart of Tokyo, I found myself standing on the platform waiting for a particular train with a Halloween costume in my bag and a bottle of Jack Daniels in my back pocket. Around me small clumps of gaijins (foreigners) and Japanese, some in costume, some not, stood conspicuously inconspicuous on the platform of the northbound Yamanote line. We were all there waiting for the same train. Some of us were seasoned veterans, while others were newbies waiting for proof of a Tokyo urban legend - the Yamanote Halloween Train. (...)

The legend of the Yamanote Halloween Train goes that sometime in the 90s a group of gaijins and Japanese literally took over a Yamanote Train - at least a car or two - and partied on it as it looped around Tokyo. The tradition continued through the years as it spread by word of mouth to become an urban legend. Some people thought it only a myth or just a one-time occurrence. (...)

Commuters suddenly found themselves deluged with a motley horde of vampires, power rangers, masked wrestlers, pirates, playboy bunnies, ninjas, one bloody grim reaper and Darth Vader. Many of the commuters must have thought we were a large group heading to a Halloween party. What they soon came to realise was that we were the party."

Halloween on the metro in 2007

Warnings from the party-poopers 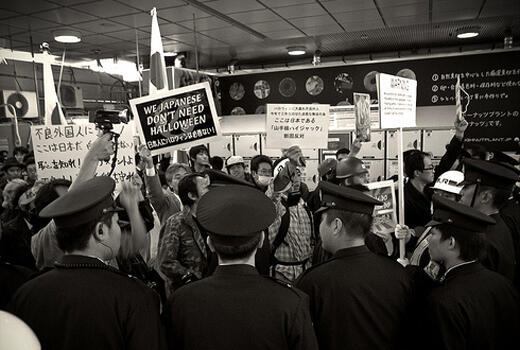