The opposition movement born in the wake of Iran’s presidential disputed election in June is back on the streets of Tehran today, marring the anti-American celebrations organised to mark the 30th anniversary of the storming of the US embassy in 1979. See the videos... 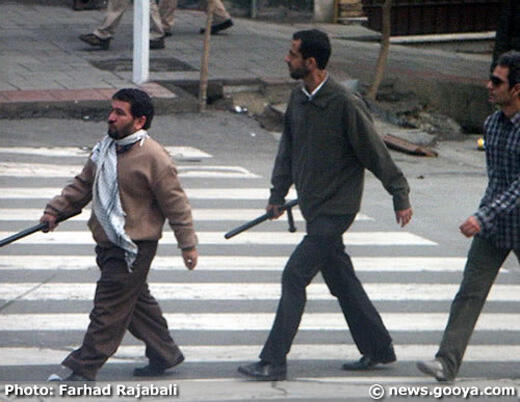 The opposition movement born in the wake of Iran’s disputed presidential election in June is back on the streets of Tehran today, marring the anti-American celebrations organised to mark the 30th anniversary of the storming of the US embassy in 1979.

These are the first images to come from the capital. We’re updating this post as we get more footage. Please be aware that the time indicated is the time we publish the document, not the time it happened.

Send us your images.

“I saw many people hit in the head”

Paria (not her real name) took part in today's demonstrations. She sent us her account by email.

The demonstration began at about 10am between Motahari Street and Mofateh Street, near to Haft Tir square in the centre.  People shouted "Death to the dictator" and "Free the national republic".

I was walking from Mofateh Street towards Haft Tir square, when riot police on motorbikes attacked us and shot at the crowd with rubber bullets. The bullets contain orange paint so that on impact the target is splattered with liquid and marked. They're also extremely sharp; I saw many people hit in the head, leaving the streets covered in blood.

People ran into side streets to hide, but the officers followed them and attacked them with electric batons. When I tried to run away from the motorbike police I felt something hit me from behind. It started to hurt and when I looked down I realized my leg was covered in blood and then I fell over. A group of people helped me into a garage when the police started to fire tear gas. We couldn't even breathe; the police even shot tear gas into the garage. They were trying to divide the crowd into small groups by forcing them to move towards side streets or alley-ways.

A woman helped me to take care of my leg, which had been hit by a rubber bullet, and then we left. I saw [opposition leader Mehdi] Karoubi pass through Haft Tir several times.  The Basij and riot police officers started attacking us again. I could hardly run because of my leg. A man found me a taxi and I went home.

The phone lines and internet connections have been cut so I can't get hold of anyone. I'm really worried about my friends who stayed at the protest. I still have no news of them."

Riot police strike a woman with a baton, prevent others from coming to her aid. 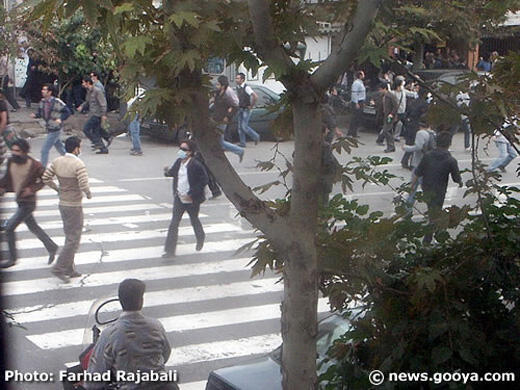 According to our Observer Omid Habibinia, this footage, filmed from behind the gates of a garage, was shot today in a street on the edge of the gathering. 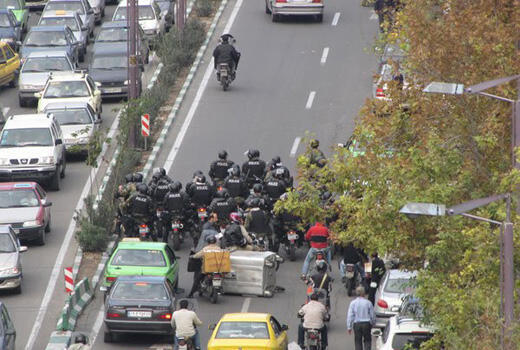 Posted on the Revolutionary Road blog.

Clashes with the police in Karimkhan district.

Motahari Road in the centre of the capital. Video sent to us by our Observers Omid Habibinia. 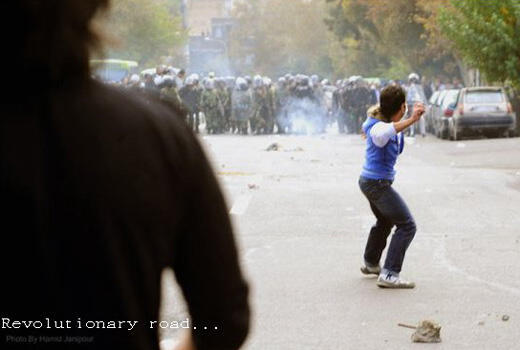