"Only for show" Baghdad checkpoints to blame for bombings

Sunday's double suicide bombing in Baghdad took place in what was considered the city's safest area barring the "Green Zone". As the death toll soared to over 150, the people of Baghdad were left wondering just how the attackers could get through the city's countless checkpoints. One of our Observers there explains. Read more...

Sunday's double suicide bombing in Baghdad took place in what was considered the city's safest area barring the "Green Zone". As the death toll soars to over 150, the people of Baghdad are left wondering just how the attackers could get through the city's countless checkpoints.

The attack is the worst the Iraqi capital has seen since April 2007, and comes just months after the targeted road reopened to public traffic. At least 25 staff members of the Baghdad Provincial Council, which runs the city, were killed in the bombing.

Two days after the attack al Qaeda claimed responsibility for the bloodshed, saying they wanted to punish what they call "the Ministry of Injustice and Oppression". The government however, blames members of Saddam Hussein's outlawed party, Baath. Today (October 29), dozens of security force members who were on shift over the weekend, including 11 officers and 15 commanders of connected checkpoints, were arrested over the attacks.

The attack is suspected as a first attempt from opposition militants to destabilise Prime Minister Nuri al-Maliki's government in the run up to January's parliamentary election. 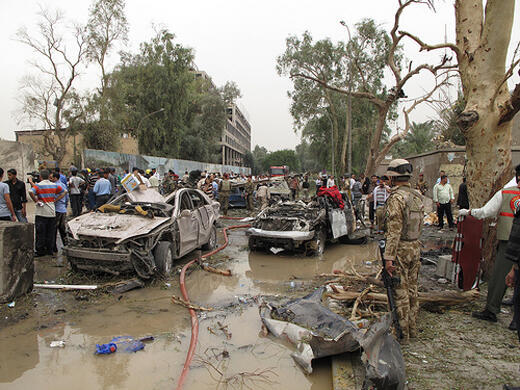 An hour after the attack in front of the provincial administration building. The water flooding the roads is the result of the hoses used to extinguish the fire. Photos posted on Flickr. The author wishes to remain anonymous.

The second blast caught on tape

This amateur footage shows the moment when the second of two trucks exploded between the Ministry of Justice and the provincial administration building on the morning of Sunday October 25.

“This video proves how farcical security is”

Mohammed is a dentist from Baghdad. He works in the same district as the Ministry of Justice.

I was working in the clinic as usual when I heard two blasts, very close together. At first I thought it was nothing out of the ordinary, but after half an hour my colleague's husband phoned, to say he'd been at the Ministry of Justice, but that he was alive. That's when we realised it was a terrorist attack.

There are countless checkpoints in this area, but I'm not at all surprised they failed to stop the bombers. The checkpoints are only there for show. They do absolutely nothing for our security - and this is the proof. All they do is make our lives hell; there are minimum two checkpoints on every street in Baghdad, meaning one-lane traffic at every corner. On my way to work I pass 15; it takes me almost an hour, and yet it's only three kilometres away. They stop people every seventh or so car, but only ever ask the same question: ‘Do you have a gun?' (Who would say yes?!) Then they glance into your car, and off you go.

They can't get rid of the checkpoints though, because nothing would change; there would be just as many attacks. That would reveal two things. Firstly, that the government intelligence services are useless and can't be relied upon. Secondly, that the checkpoints weren't working.

The amateur video of Sunday's attacks is a good example of just how farcical the security system is. Immediately after the blasts, machine guns fired into the air. What is the point? It only causes panic and more casualties. But it seems to be the generic reaction to any incident here - they think it makes it look like they're responding to attacks.

I'm not at all surprised to find out that security force members are behind this. They were also involved in the last big attack, on bloody Wednesday [August 19]. I wouldn't say it's Baath members any more than opposition members. And as for al Qaeda, they often claim responsibility for things they haven't done, as part of their publicity mission, but that doesn't mean they weren't involved this time."

What's disgusting, is that whoever they are, they're taking orders from someone high up, and it's most likely a political force who's trying to pressure the government into doing something; or destabilise them in the run up to January's election. No doubt we'll see plenty more of this in the months to come, although I don't think it's a return to the chaos of 2006/ 2007."