On August 3 violent clashes broke out between local residents and Chinese immigrants in a suburb of Alger. Our Observer in Blida, 50km from the capital, explains that reasons behind the conflict are economic as well as cultural. Read more...

On August 3 violent clashes broke out between local residents and Chinese immigrants in a suburb of Alger. Our Observer in Blida, 50km from the capital, explains that reasons behind the conflict are economic as well as cultural.

Abdelkrim interviews the shopkeeper in a mixture of French and Arabic. "Do you have a wife?" he asks. "Yes". "Children?" "Yes, one". He says that he lives in a studio apartment nearby with his family. Later Abdelkrim asks "And you’re paying tax? All declared?". "Yes, yes," replies the shopkeeper.

The following photos were taken in Blida by Abdelkrim Amekelbled.

The logo of a Chinese-Algerian company.

A Chinese shop in the centre of town. 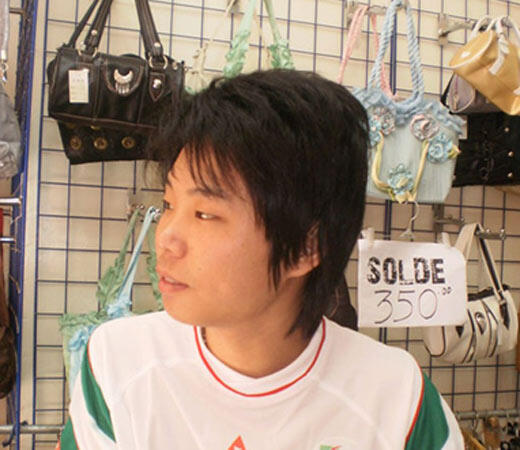 As a way of proving his love to the Algerians, the shopkeeper has “I love you” permanently tattooed onto his hand in both French and Arabic.

Chinese products in a perfumery in Blida. Photo: Abdelkrim Amekelbled.

“The Algerians say that cohabitation with the Chinese is ‘impossible’”

Abdelkrim Amekelbled is a retired teacher from Blida.

With over 32,000 Chinese workers in the country, including some 6,000 here in Blida, there are more Chinese migrants than any other nationality in Algeria. This mass migrant community, at a time when almost 70% of Algerians are unemployed, is not looked upon kindly by the natives.

A few months after the first wave of workers arrived, many of them gave up working in construction after not having been paid or suffering poor working conditions. They turned themselves into salesmen and set up shop on the black market. Products imported from China don't pass through any of the quality controls that Algerian goods have to. The first to suffer due to this has been textile and clothing sector, which has already seen the closure of ten factories and thousands of job losses.

That's not the only problem in the eyes of Algerians. Even those open to other cultures are finding it hard to accept these masses of workers who don't speak their language and don't share the same beliefs. On their side; the immigrants don't take part in Algerian social life. They don't go out much and when they do they stay in a group.

They do however make efforts to please the Algerians. In Blida spring 2008, they voluntarily went about building a mosque in the district of Ouled Yaïch. In just three days, the Chinese workers did what the Algerians had never got round to. The Algerians recognised the determination of the immigrants. They denied having had been racist towards them. But they also said, that cohabitation with the Chinese is ‘impossible'.

I do not think, however, that today's frictions will last forever. Algeria will come round to these cultural differences by reviving its own culture of tolerance."