It's not unusual for companies in Libya to publicly well-wish "Brother and leader of the Revolution", Colonel Muammar Gaddafi. Except when it's... French military aviation company Dassault Aviation. Read more.

It's not unusual for companies in Libya to publicly well-wish "Brother and leader of the Revolution", Colonel Muammar Gaddafi. Except when it's... French military aviation company Dassault Aviation.

"Dassault Aviation sends to 'Brother and leader of the revolution', as well as to the people of Libya, its best wishes on the occasion of the 40th anniversary of the glorious September 1 revolution". It's this indulgent splurge that greets both Libyans and foreigners alike when they drive into the popular Souk al-Thulatha commercial zone in Tripoli.

Contacted by FRANCE 24, the French aviation company confirmed that it had sent its compliments to the Libyan leader, but gave no further details about who produced the poster. The company's communication service however, told us that the poster was created in the run-up to the 2009 Libyan Aviation Exhibition (Lavex) in October. It also coincided with a project to repair a number of Libyan-owned Dassault Aviation planes, which have received no maintenance since 1992, when a 12-year embargo was placed on the country following the 1988 Lockerbie bombing.

On December 10, 2007, Dassault Aviation signed a protocol of agreement with Libya, which launched the negotiation of 14 fighter planes, 35 helicopters, and other military equipment, for the grand total of 4.5 billion euros.

"Challenge the world, take pride. We sacrifice body and soul for you." Image published on the alriadhi forum. 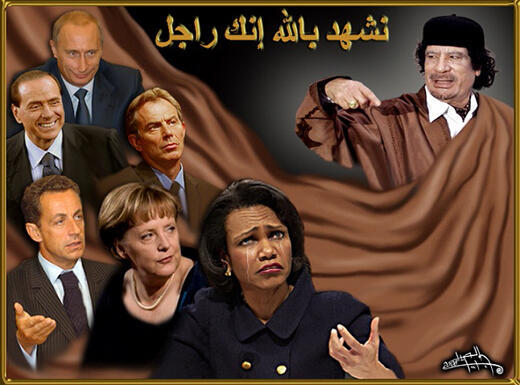 "We swear that you are a man, a real man." Photo published on the alriadhi forum.

Warm words in the streets of Tripoli... 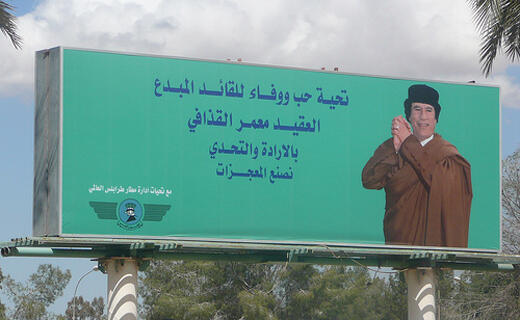 "Warm and loyal regards to our innovative leader, Colonel Muammar Gaddafi. With determination and defiance, we work miracles. From the management of Tripoli airport." Image posted on Flickr by Dan.

"Best regards to the leader of victory and defiance. The Libyan Olympics committee and Tripoli airport." Image posted on Flickr by Dan. 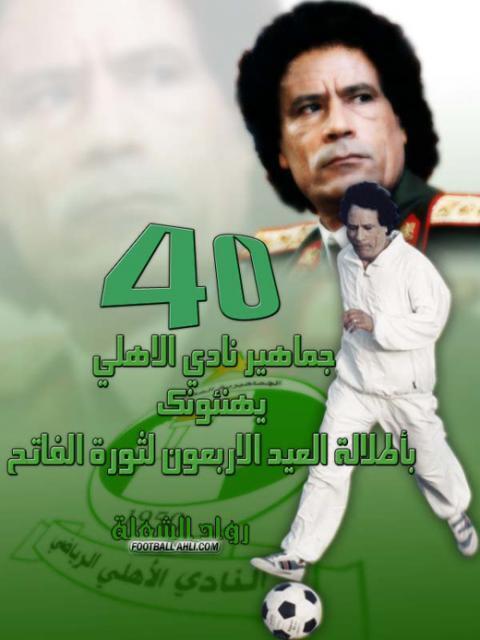 "Supporters of the Al-Ahli club congratulate you on the 40th anniversary of the September 1 revolution." Image published on the Footballahli.com forum.

“All public and private businesses in Libya do it. They have no choice”

Ghida Twati is a blogger and journalist in Tripoli.

By displaying this poster in an area where there is a huge amount of traffic, the authorities are clearly showing it off. They're trying to prove that the regime enjoys good relationships with overseas companies. It's supposed to promote the image of a ‘new Libya'.

That Dassault Aviation sent its compliments for the anniversary of the revolution is not surprising in itself. All public and private businesses in Libya do it. They have no choice. Company managers who should forget to do this soon find themselves dismissed from their duties.

It's true that the French company did send its compliments, but the poster looks typically Libyan. I'd also say that it looks like whoever designed it works for the official news agency Jamahiriya Press (Jana), which is often complimentary about the regime, and often criticised by citizens for its poor quality of services."