Iraqi shoe-thrower to get hero’s welcome?

Iraqi journalist Muntazer al-Zaidi, who shot to fame last December when he threw his shoes at then President George W. Bush, was released from prison on Tuesday. But is he still hailed a hero for his crime? Not all of our Iraqi Observers are convinced. Read more...

Iraqi journalist Muntazer al-Zaidi, who shot to fame last December when he threw his shoes at then President George W. Bush, was released from prison on Tuesday. But is he still hailed a hero for his crime? Not all of our Iraqi Observers are convinced.

It was during a press conference in Baghdad that al-Zaidi took off his size tens and hurled them at Bush, catapulting him to worldwide recognition... and also into a three-year jail sentence for "attacking a head of state on an official visit". His sentence was later reduced to one year on appeal, and then nine months for good behaviour.

The celebrated hero is set to be showered with gifts on his release from Muthanna military base in West Baghdad. The Emir of Qatar plans to hand over a horse made of gold, Libyan colonel Muammar Gaddafi wants to present him with a bravery honour, and Bahraini businessman Quresh Khan Buneeri would like to send him a limousine. As for his former employer, TV channel al-Baghdadia, they'll be handing over the keys to a new apartment, so Al-Zaidi can say goodbye to his one-bedroom flat in bustling Rachid, downtown Baghdad.

“A guest should never be humiliated”

Ali al-Mousawi is a student in Baghdad.

Al-Zaidi's act was seen differently depending on age. For young Iraqis, he's an Arab hero to be worshipped forever more. But for older Iraqis, and the majority of intellectuals, al-Zaidi showed a lack of professionalism and moreover, a lack of hospitality, something that we are very attached to in Iraq. A guest should never be humiliated.

But it has to be said that al-Zaidi is largely popular in Iraq and beyond. A Palestinian shopkeeper from [West Bank city] Nablus said he was ready to offer his daughter's hand in marriage. And others, from Egypt to Jordan, have done the same. However, it's said that once he's released, he'll be taking a plane straight to Greece due to worries over his safety."

“Dozens, hundreds, of children born in the wake of the event were named Muntazer”

Ahmet Hasim is a journalist from Kirkuk, the capital of the Turkmen region in northern Iraq.

For us Turkmen, Muntazer al-Zaidi's act was a happy occasion. We're very patriotic and saw it as something heroic. We consider him a model for young Iraqis. Dozens, hundreds, of children born in the wake of the event were named Muntazer; one of my friends didn't think twice about doing it. It's quite significant, if you know what importance we give to the naming of our eldest child. A number of young people from the region want to go to Baghdad to welcome him out of prison, but they're worried about insecurities in the capital." 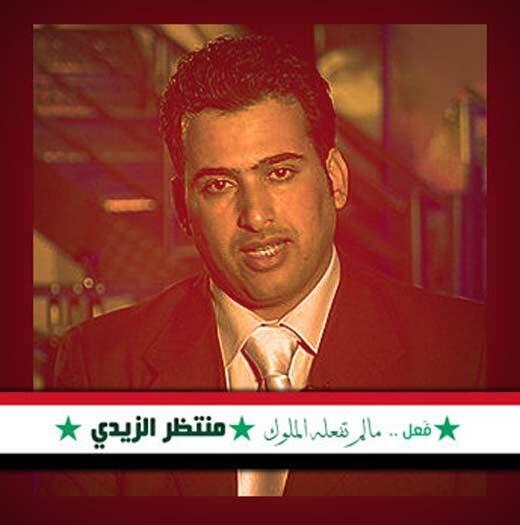 "He did what kings didn't dare to." Published on al-Zaidi's Facebook fan page.

“I respect him for his bravery but not his actions”

Mohammed is a dentist in Baghdad who writes the blog Last of Iraqis.

The Iraqi population is split in two over Muntazer al-Zaidi. Some see him as a hothead, others as a hero - a symbol of resistance against the US. Personally, I don't think throwing your shoes at Bush is the best way to express your anger. He behaved wrongly. I respect him for his bravery and his strong beliefs, but I don't approve of his actions." 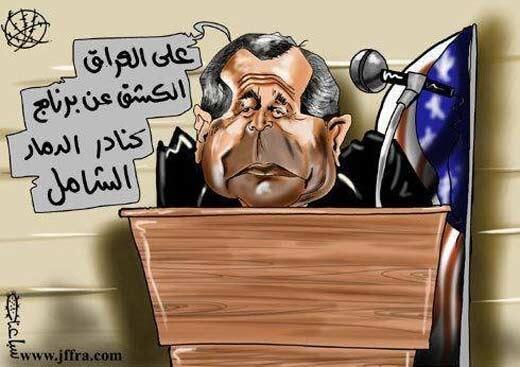 "Iraq must reveal its shoes of mass destruction”. Published on jffra.com.