Twitter came under an unprecedented cyber-attack on Thursday night, which blocked some 17 million subscribers from accessing the micro-blogging platform. Clues on the origins of the attack suggest the Russian-Georgian conflict may have spilled over into the social networking site.

Twitter came under an unprecedented cyber-attack on Thursday night, which blocked some 17 million subscribers from accessing the micro-blogging platform. Clues on the origins of the attack suggest the Russian-Georgian conflict may have spilled over into the social networking site.

It was 6:00am, California time, when the cyber-pirates launched their offensive on Twitter. This type of attack is called a DoS - a Denial of Service. It is meant to cripple a site by multiplying connection requests from computers infected with a virus.

The virtual-community website Facebook was also affected by the attack. Some Facebook users noticed unusually slow connections. The company assured subscribers that no personal data was stolen or modified. A few hours later the two sites returned to normal activity.

According to some bloggers the attack was caused by massive sending of spam via false identities, a technique called "Joe Jobbing". Le Monde's website claimed that the spam was sent by a pro-independence militant from Abkhazia, a territory whose sovereignty has only been recognised by Moscow.

The onslaught reportedly struck a Georgian blogger too, just one year after the armed conflict that pitted his country against Russia. His various accounts - Twittter, Facebook, Livejournal and Google Blogger - were all hacked. 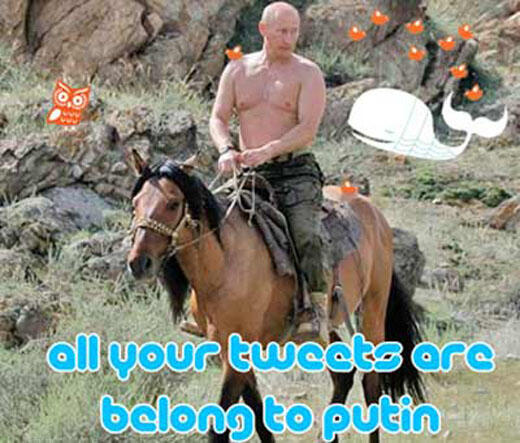 "All your tweets are belong to Putin." The grammatical mistake is voluntary and refers to the video game "Zero Wing Read", known for its disastrous translations, and more specifically for the now cult phrase "All your bases are belong to us".

The list of targeted sites has not been clearly established. There would certainly have been an action-reaction effect due to the significant synchronisation between the large social networking sites. Most people who found themselves stranded on Twitter were quickly joined on other platforms like Facebook or Frienfeed to discuss their experience. This could explain some of the collateral damage and why other sites experienced delays. Personally, I followed the crisis on Frienfeed.

At the moment we do not know who is behind all this. But I am surprised by the scale of the attack. Only a top- level organisation could succeed in destabilising the largest social networking sites. It could not have come from a group of hackers bunched up in a garage.

It should be noted that on a much smaller scale, DDoS were used in Iran by anti-and pro-Ahmadinejad groups. DDoS have become weapons used for political purposes, and most sites find it very difficult to protect themselves."