The circus: paradise for children, hell for animals

Animal rights association Peta has released candid camera footage filmed behind the scenes at the US's biggest circus, the Ringling Brothers Circus. The video proves that, behind the glitter, the animals are in for a rough ride. Read more and see the video...

Animal rights association Peta has released candid camera footage filmed behind the scenes at the biggest circus in the United States, the Ringling Brothers Circus. The video proves that, behind the glitter, the animals are in for a rough ride.

With its dancing zebras, horses, tigers and elephants, the Ringling Brothers Circus describes itself as "The Greatest Show on Earth" and insists that its animals are well treated : "In all aspects of animal care and safety, Ringling Bros. exceeds all federal animal welfare standards set by the United States Department of Agriculture (USDA) under the Animal Welfare Act."

These images however, seem to suggest otherwise. Filmed by a Peta member who spent six months working undercover at the circus, the footage shows the use of bullhooks - batons with a sharp steel hook at one end which are used to punish or control elephants by penetrating their skin.

Ringling Brothers responded to the video by saying that "In the past six months, including the time period allegedly covered by PETA's video, this circus unit has been inspected by 12 different state, local and federal inspection authorities and was in compliance with animal welfare laws and regulations".

Peta however says that one of the elephants, Tonka, shows obvious signs of anxiety by constantly swaying back and forth.

Hassan Abdel-Rahman, from Denver, went to a Ringling Brothers Circus and posted the photos on Flickr.

It was actually the first time I've been to the circus, and probably will be the last. When the animals came in the elephants were holding each other's tails, with people riding them. Every now and then, and elephant would urinate or defecate, and some people dressed in black would come by and clean it up. From a human standpoint, it seemed really humiliating, but I'm not sure if the elephants cared.

For the tigers, it was a little different. They turned down all the lights, and told people to be quiet. There was a trainer there with a stick and a whip that would coax the tigers into position. Then the tigers would start to perform tricks; jumping through hoops, and sitting on little chairs or something.

I'm not too sure what a happy elephant or happy tiger would look like. But these certainly didn't seem happy. The stadium that the animals perform in is very loud. They have motorcycles driving around performing stunts, and various pyrotechnic explosions (although not at the same time as the animals are performing). However, the exhaust fumes from the motorcycles were very strong in the air afterwards. Also, the stadium is circled by thousands of people with lots of lights flashing. It just seems like an uncomfortable place to be - animal or human.

Afterwards, there were actually lots of protesters outside of the show handing out pamphlets about animal cruelty at Ringling Brothers, and it did make me wonder what was happening to the animals before and after the show. I doubt that animals had facilities approaching anything like the kind that you see at a zoo, where the animals can at least stretch out and act semi-normal." 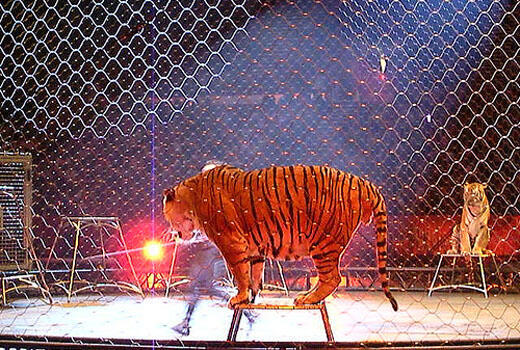 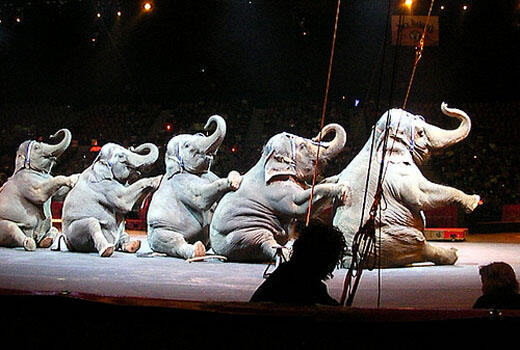 "If we want animals to obey us, they have to trust us"

I can only disapprove of these methods; the two people featured act very badly towards the animals. However, we need to know more about this video. It seems that they are employees and not managers. Also, you never know, it could be a set-up orchestrated by the animal rights people. Personally, I've known Ringling Brothers trainers and they've been more than competent.

At our circus, we take a lot of care with our elephants. We do use bullhooks, which are traditional from India, but not in a very harsh way. They're simply a tool for guiding the animals. If we want animals to obey us, they have to trust us. Learning comes from rewards and not punishment. So we have to remember that an unhappy elephant will win in the end - a blow to the head from an elephant trunk would knock you for six.

In France, there are veterinary controls for circuses in each region. The rules are strict and we respect them. And as much as we can, we let the animals out in open space. Finally, it's said that swaying shows anxiety. That's not true, even in India they get like that when they're tired."