Who hasn't received an email asking them to send money to the other side of the world? One country where online scammers are making a very profitable living, Ivory Coast is threatening to launch a crackdown on the fraudsters. Read more...

Who hasn't received an email asking them to send money to the other side of the world? One country where online scammers are making a very profitable living, the Ivory Coast, is threatening to launch a crackdown on the fraudsters.

In general, people are tricked into sending money after an exchange of friendly and/or desperate emails from a pastor renting his flat in London/a millionaire who lost his cheque book, a penniless bride etc. Online scammers, who think up new ways to swindle your money daily, have become masters of persuasion with fake documents at the ready for those of us harder to convince.

Either the person is too trusting or a victim of blackmail (compromising photos included...), the money is then wired through a money transfer agency and happily withdrawn by the trickster at the other end, with a slice handed over to the unquestioning cashier at the desk. A fraud expert tells us here how they're closing in on these anonymous scammers.

Example of a blackmail email posted online by a web user 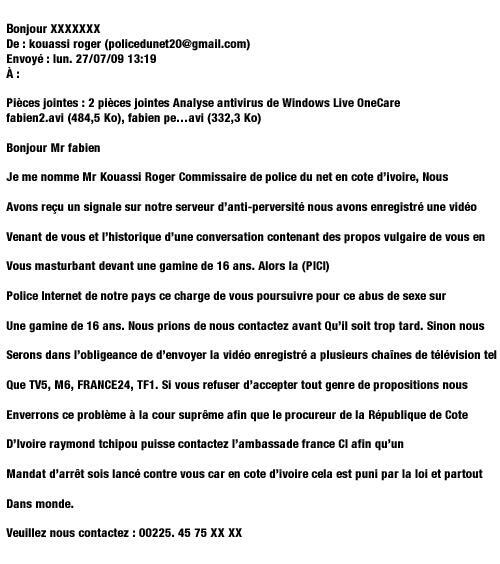 My name is Mr Kouassi Roger, chief of the Ivorian internet police. We received an anti-perversity alert on our server about a document coming from you. It's a document of a conversation you had which includes vulgar content, when you were masturbating in front of a young girl of 16 onscreen. The (PICI) Internet Police of our country is charging you with the sexual abuse of this young 16-year-old. We're contacting you before it's too late. If not we'll be obliged to send the video to several [French] TV channels such as TV5, M6, FRANCE 24, TF1. If you refuse to accept any proposition we will take the case to the Supreme Court after which the public prosecutor of Ivory Coast Raymond Tchipou [sic, his surname is in  fact spelt Tchimou] will contact the French embassy and a warrant for your arrest will be issued in Ivory Coast, which works all over the world. Contact us on [telephone number]."

How not to get fooled by Ivory Coast scammers

This video shows how scammers use photos of (unknowing) girls to coax men into sending them money.  Posted by "xerial30".

“For some it’s their primary source of revenue”

The scamming phenomenon took off around a decade ago and has got increasingly bigger since. In the beginning it was work that only a few specialists knew how to do, but youngsters picked up the trade quickly. Here in Ivory Coast they almost always target Europeans. It's not a one-man job; the scammers have several accomplices, particularly in money transfer agencies near to them, where the scammers come to collect money sent from abroad.

In Abidjan there are certain districts known for scam-operating areas, Treichville and Marcory being two of them. For some people it's their primary source of revenue. Encouraged by internet anonymity and the conviction of their victims, many have made a fortune. But our country's reputation has suffered from their swindling. As a nationality we've been blacklisted on the Internet. Some major websites have blocked our IP addresses. Economically we're penalised when it comes to online transfers and transactions.

In order to fight this plague, we've set up a cyber-criminality platform to survey the scammers, hand them over to the police, and have them brought to justice. This is going to cut this kind of crime by 80% in the coming months. There's also a law coming into play next month which will mean that web users have to show ID if they want to use a computer in an internet cafe."

Showing off their gains

A compilation of photos posted online by scammers. Posted by "croquescrocs".