Foreigners are welcome in Cuba, as long as they stick to the beaches and don't meddle with local politics. A young French student learnt this the hard way, when she was forcibly deported from the island after she befriended local political dissidents. Read more...

Foreigners are welcome in Cuba, as long as they stick to the beaches and don’t meddle with local politics. A young French student learnt this the hard way, when she was forcibly deported from the island after she befriended local political dissidents.

Marie-Bérengère Ruet, a graduate student in the Parisian Institute of Political Science (Sciences-Po), spent two months in Cuba last spring to gather material for her thesis on Cuban opposition and resistance groups. During her stay, she met with, interviewed and befriended several opposition activists, considered as dangerous delinquents by the Cuban authorities. Their crime? Filtering information about the situation in Cuba outside the country, and generally expressing their dissent more vocally than most.

"All I actually did was talk to political opponents"

Marie-Bérengère Ruet is a political science student in Paris.

At 9:00am on April 15, a squad of eight men in green uniforms from the Interior Ministry security force (Minit) arrested me as I returned to my host family’s home on calle Manrique, Havana. They had been waiting at my street corner for over two hours. They took me to the immigration department headquarters and interrogated me for several hours (they played a good cop, bad cop routine) before finally deporting me the next day.

The Minit officers who interrogated me spoke of Cuban dissidents as “capitalist terrorists” who are paid by the CIA to destabilise the regime. But from what I saw, they were penniless activists who lived in run-down studios and shared one computer and one camera between eight bloggers to get their information out. To go online, they have to sneak to Internet terminals in foreign embassies. I was also accused of speaking to convicted prisoners in labour camps. But I never set foot in one of those, although I did befriend the brother of a political prisoner.

I was granted several hours to pack my things. I managed to safeguard my most important thesis notes by giving them to a foreign friend who mailed them back to me from his home country. But my portable computer was confiscated and the data in it lost, including all the photos of my trip. I was not able to say good-bye to any of her Cuban contacts before being escorted by Minit officials to the airport, where I was once again interrogated and searched. My host family’s tourism licence was revoked and they were fined 1,000 US dollars.

I half-expected something like this to happen to me, maybe I wasn’t careful enough. I was still shocked, though: all I had actually done was talk to members of the opposition. It shows how inexistent freedom of expression is in the country.

I’m more worried about the people I left behind than I was scared about my own fate. Minit interrogators even confiscated love letters from a Cuban boy I had grown close to. I try to keep in touch with my contacts there, but phone lines often don’t work, so it’s mostly through occasional emails. I’m not sure what would happen if I tried to go back to Cuba now, but I don’t think I’ll try yet." 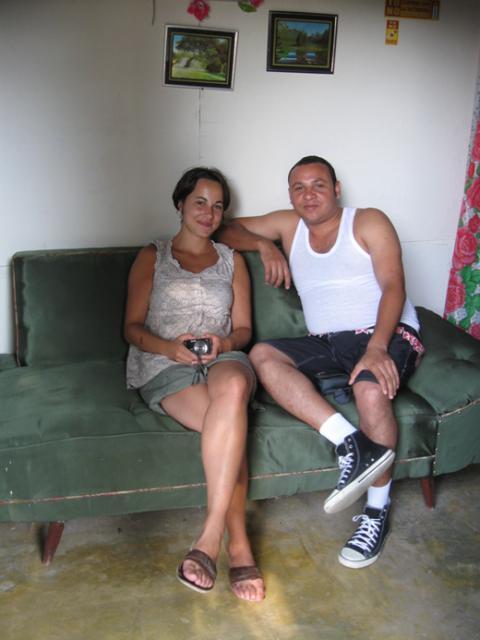 Marie-Bérengère Ruet with Roberto de Jesus Guerra Perez, an independent Cuban journalist and human rights activist. The photo was taken by a friend of hers, and is one of the only ones she has left from her trip.