Angels and Demons, part of the grand conspiracy theory?

Conspiracy theories sprout like mushrooms at each global crisis, and Swine flu is no exception: one blog blames a mysterious secret society, the Illuminati, for the recent outbreak. Do movies like Ron Howard's upcoming Angels and Demons add fuel to the conspiracy-theory fire? Read more...

In Angels and Demons, Dan Brown claims that the pyramid and the eye on the American dollar are symbols of the Illuminati.

Conspiracy theories sprout like mushrooms at each global crisis, and Swine flu is no exception: one blog blames a mysterious secret society, the Illuminati, for the recent outbreak. Do movies like Ron Howard's upcoming Angels and Demons add fuel to the conspiracy-theory fire?

Most people had never heard of the secret society of the Illuminati before Dan Brown's novel Angels and Demons, sequel to the best-selling Da Vinci Code. In the book and its subsequent Hollywood version, the Illuminati are presented as a renaissance-era society of great thinkers, including the scientist Galileo and the artist Bernini, who were "expelled from Rome by the Vatican and hunted down mercilessly", according to Brown. In fact, the only known Illuminati society recognised by historians was founded nearly a century later, in Bavaria, in 1776. The plot of Angels and Demons takes place 400 years later, when the Illuminati, now a powerful and ruthless secret society, return to take their revenge on Vatican cardinals.

It's a short leap from there to the most common conspiracy theories, in which the Illuminati are said to be a mysterious "elite within the elite" whose goal is to infiltrate positions of power to create a ‘new world order' based on secular knowledge. Some see symbols like the pyramid and the all-seeing eye on US dollar bills as a sign that Illuminati have infiltrated the highest spheres of power.

Under fire for distorting historical events, Angels and Demons movie director Ron Howard wrote in the Huffington Post that the movie is "nothing other than a work of fiction", pointing out that if "fictional movies couldn't take liberties with reality, there would have been no Ben-Hur, no Barabbas, The Robe, Gone With the Wind or Titanic". But Dan Brown's official website is not so quick to dismiss the novels as pure fiction...

The "Illuminati consipracy" according to web users 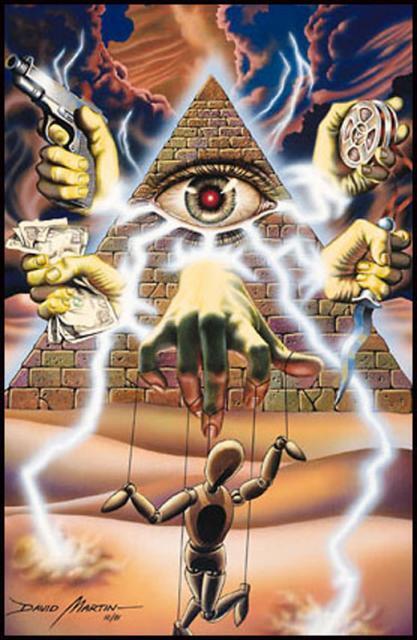 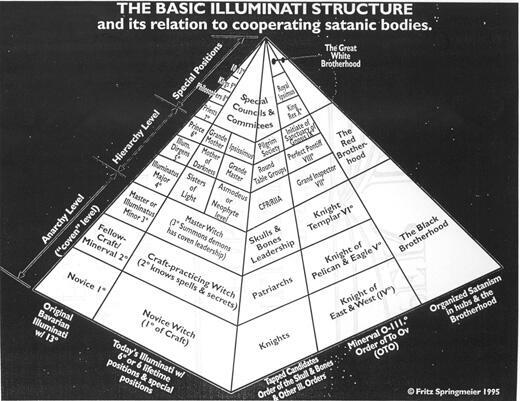 The pyramid structure of the secret Illuminati society. Posted on Conspiracy Watch. 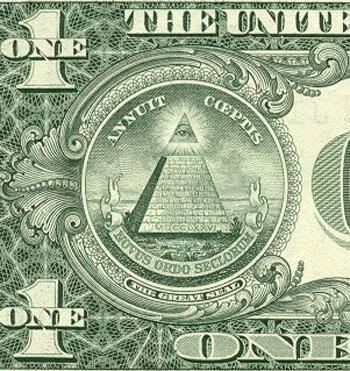 Zoom on the pyramid and eye on the American dollar note. Some consider them Illuminati symbols.

Bill Donahue is president of the New-York Based Catholic League.

Dan Brown and Ron Howard are deliberately blurring the line between fact and fiction because they continue to speak outside of both sides of their mouth. Just as they did with "The Da Vinci Code," they claim that at least part of their work is based on historical "facts," and then when pressed they fall back on the refrain that it is just a novel. This genre is pernicious: it plants the seed in the mind of the viewer that what they have just seen could possibly be true.

In fact, not a single member of the Illuminati was ever "brutally massacred" by the Catholic Church, as the movie claims. Moreover, the Illuminati were not founded in 1600 as they claim - it was founded in 1776 and it was dissolved in 1787. Why did they play fast and loose with the facts? So they could drag out their favorite martyr, Galileo, and maintain that he was persecuted by the Church. Galileo, however, died in 1642 and could not possibly be tied to the Illuminati. Besides, he was never tortured and never imprisoned.

The Catholic League simply asks that the film be preceded by a disclaimer saying that the movie is a fictional account."

- On the early Illuminati:

It is a historical fact that the Illuminati vowed vengeance against the Vatican in the 1600s. The early Illuminati--those of Galileo's day--were expelled from Rome by the Vatican and hunted down mercilessly."

- On Illuminati symbolism on the US dollar:

The design was presented to the US treasury in the 1940s, when the Illuminati brotherhood was widely accepted to have spread from Europe into America and infiltrated the brotherhood of the Freemasons. At the time, many Masons were upper echelon government officials. Vice-President Henry Wallace was one of them, and most academics now believe the design for the Great Seal was lobbied for by Wallace. Whether he made his decisions as a covert Illuminatus or innocently under their influence, nobody will ever know."

- On an unflattering portrayal of the Catholic Church:

I imagine some controversy is unavoidable, yes, although it's important to remember that Angels & Demons is primarily a thriller--a chase and a love story. I think the reason Angels & Demons is raising eyebrows right now is that it opens some Vatican closets most people don't even know exist."

The "Angels and Demons" trailer