April 15 is traditionally the day when Americans send their tax returns. It's also the day thousands of protesters chose to express their opposition to the tax policy and spending of the Obama administration, by organising tea parties throughout the US.

April 15 is traditionally the day when Americans send their tax returns. It's also the day thousands of protesters chose to express their opposition to the tax policy and spending of the Obama administration, by organising tea parties throughout the US.

It all started on February 19, as CNBC host Rick Santelli went on a rant about the new administration's tax policy and bailout plan, saying that the founding fathers would "be rolling over in their grave". During his impassioned speech, the television editor brought up the idea of a Chicago Tea Party; a direct reference to the 1773 Boston Tea Party, when a group of Americans threw overboard 45 tons of tea from British ships to protest against the taxes the British government imposed on their American colonies.

Rick Santelli's idea spread like wildfire on the Web. Three national conservative organisations, Don't Go Movement,Top Conservatives and Smart Girl Politics, joined forces to organise a first "tea party" event on February 27, gathering 30,000 people nationwide. Since then, the tea party movement has gained momentum. A second protest day is set for April 15, the national tax day. In the US, taxes represent less than 30% of GDP, making it one of the lowest taxed countries in the industrialised world (tax ratio in Europe is about 38%). Some Americans, however, want taxes to be even lower. A Conservative Observer tells us why. 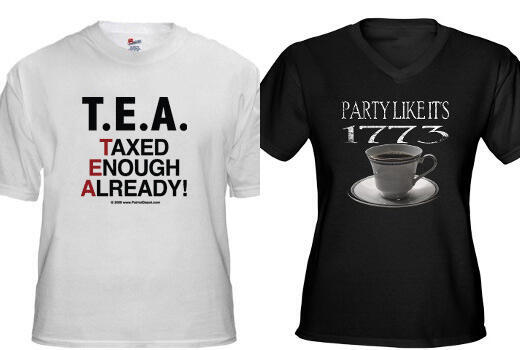 "Revolutionary" tea label, complete with the flag of the original thirteen colonies!

Juliana Johnson is the Communications Director for the Nationwide Tax Day Tea Parties.

The tea party movement was launched to protest against a number of issues, including the fiscal reforms and federal bailout plan of the Obama administration, as well as national debt. This year, the federal government spent 3.9 trillion dollars. This is more than the total federal funding until 1979, meaning over a period of 185 years! Even taking inflation into account inflation, that's still huge. Our movement gathers a very large spectrum of people and viewpoints but basically the idea is that we shouldn't be bailing out private companies. If you can't manage your company and you don't do a good job, then you should just fail. Obama will raise taxes on people who make a lot of money. We think that's counter productive because those are the ones who create jobs. Besides, the money collected won't even be used to create jobs or jump-start the economy but to set up welfare programmes. Our movement isn't just about Republicans or Democrats, it's about America.

Just being friendly and nice, a candidate can be elected in the US. What we see today with the tea party movement is that many of Obama's voters didn't understand the fiscal implications of their choice. We're trying to build a coalition to make people politically active and put pressure on the government. On April 15, 500 tea parties will be held throughout the US and we expect to gather between 500,000 and 1 million protesters."