Rugby heroes dig among the ruins of L'Aquila

All catastrophes breed their heroes and martyrs. The rugby team of L'Aquila, where a devastating earthquake killed at least 200 people on Monday, has both. Read more…

All catastrophes breed their heroes and martyrs. The rugby team of L'Aquila, where a devastating earthquake killed at least 200 people on Monday, has both.

The medieval city of L’Aquila, in central Italy, has long been the heartland of Italian rugby. After a devastating earthquake reduced much of the city and neighbouring areas to rubble, the celebrated local rugby team is once again in the spotlight. One of them, 20-year-old Lorenzo Sebastiani, is among the more than 200 victims counted so far and many of his teammates have played a central part in the recue operations, at the risk of their own lives. We spoke to two “Bersaglieri” or “Sharpshooters”, as L’Aquila’s rugby players are known.

This post was made with the help of our Observer in Italy, Alberto Celani, for whom the heroism of L'Aquila's rugby players is hardly a surprise. As he told us, "L'Aquila is known in Italy to be a club of tough and strong-minded players, who never give up".

Solidary on the pitch, and in adversity 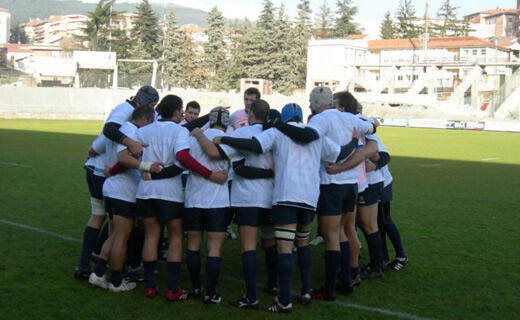 Emmanuel Giacoponi, from Argentina, joined L’Aquila’s rugby team in October 2008. Along with most of his teammates, he was asleep in the players’ residence at the time of the earthquake.

I woke up to the sound of cries and shaking walls. I quickly slipped some clothes on and ran out with my roommate. After a few chaotic moments we headed for the underground car park just outside the city centre with several other people.

Our residence was relatively spared by the tremor. The only one of my teammates who died, Lorenzo Sebastiani, was staying with friends in the centre. They found his body yesterday, but could only identify him this morning thanks to the tattoos on his body. It’s a real tragedy: we were a good group and a good team. He was one of the youngest. To lose a close friend is always hard; it’s worse still when it’s so sudden.

The authorities have been urging local residents to evacuate the city in case there is another quake. The city centre is a no-go area. The stadiums are being used to host tents for the evacuees, and our training sessions have been suspended. I’ll try and recover some of my belongings tomorrow, as I only have the clothes I’m wearing right now. Then I’ll go to Udine (north-east Italy), the city where I used to play before coming here. I don’t know what will follow. I’m not scared of continuing to play for L’Aquila, but our facilities and residence have been damaged, so it may be difficult to start again.

There had been minor tremors since January, which gradually got stronger. I don’t understand why the authorities didn’t give us more warning of the threat of stronger quakes, and how to behave in the event. This could have saved lives, including that of my teammate Lorenzo."

"We’re exhausted and absolutely shattered, but nobody wants to leave."

Dario Pallotta, 25, is a member of L’Aquila’s rugby team. After playing an active part in rescue operations, he gave us his account of the quake’s immediate aftermath.

Just after the quake everyone ran outside to escape the crumbling buildings. As we all made for the square I heard a woman’s voice calling for help. She was trapped inside her house. The collapsed staircase had blocked the font door, so I had to knock it down. The pipes were severed and the place was wet, with a dreadful smell of gas. I found an old lady there with her husband and lifted them in turn onto my shoulder to carry them outside.

I then heard that help was needed at the main hospital, where some of the floors were about to collapse. We spread the word among our teammates and rushed to the spot. We helped evacuate the patients and the necessary equipment. A new field hospital was then set up in a nearby field.

Our stadium has become a huge camp to host evacuees. We’re exhausted and absolutely shattered, but nobody wants to leave. Of course we can feel the aftershocks – there was another major one only this morning. But we’re staying to do everything we can to help."