'Word Raiders' hunt down plagiarisers on the Arabic Net

Copyright violations are something of an art form in the Arab world. In response to this multitude of plagiarisms, a Web user has taken it upon himself to launch a crusade against the intellectual property thieves, outing dozens of writers, journalists, painters and cartoonists who lift ideas directly from media across the world. Read more...

Copyright violations are something of an art form in the Arab world. In response to this multitude of plagiarisms, a Web user has taken it upon himself to launch a crusade against the intellectual property thieves, outing dozens of writers, journalists, painters and cartoonists who lift ideas directly from media across the world.

Thanks to careful observation and the website Copyscape - which allows users to track work that has been copied online - the founder of the site "Word Raiders" has already brought down hacks from some of the Middle East's biggest newspapers. The Kuwaiti daily Ar-Ra'iy (The Opinion) fired two journalists after they were named and shamed on the site. And it's not only journalists. Among others on the Word Raiders blacklist are six academics, a member of the Saudi royal family, a Kuwaiti Islamic MP and various researchers.

Copy and paste isn't something only known to young journalists. Respected titles such as Egyptian daily Al-Ahram and Saudi paper Al-Watan have been shamed by some of their biggest reporters. Below is an extract of an article written by Tunisian journalist Toufic Madani, which was published in the Emirates paper Al-Khaleej on June 2, 2008. The text is identical to an article penned by French reporter Frédéric Lordon, published on Le Monde Diplomatique'sArabic edition website on March 31, 2008. 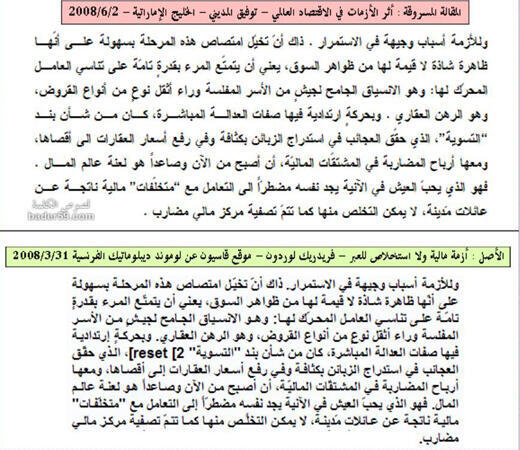 Lebanese star Najwa Karam's 2008 album cover (left) is spookily similar to an advert for Thierry Mugler's Angel perfume (right) which came out in 2006.

Below is the 2008 album cover from Saudi MBC TV presenter and popstar Razane. On the right, Beyonce's Dangerously in Lovealbum cover, which was released in 2003...

One of those caught by the site is caricaturist Ali Al-Ghamdi, who worked for Saudi paper Al-Watan. Some of his pieces, which appear to have been inspired by Christian Science Monitor artist Clay Bennett and Daryl Cagle of MSNBC, were published on Daryl Cagle's Cartoon Web Log and then picked up by Word Raiders. Here are just a few examples. Al-Ghamdi's pieces are on the left while the originals, done by Bennett and Cagle, you can see alongside.

"The people I exposed [...] were quick to personally attack me"

Badr el-Koweit (not his real name) is the creator of Word Raiders, which he launched in 2005.

I started the site in order to denounce one of Kuwait's best known journalists who was plagiarising from all over for his daily column. At the beginning the people I exposed, along with their friends, were quick to personally attack me with all sorts of insults. But when they realised that I was serious in my work, the attacks died down and now I don't have any at all.

I work alone in researching and putting information online, although I do benefit from a lot of visitors who alert me to stuff they've come across. I do this because I want to return justice to the victims who have their work stolen. People need to realise the importance of citing their sources. Copyright laws do exist in Arab countries, but they're not sufficiently dissuasive."

A painter who copies... photographs

Not even photographs are safe when it comes to intellectual property theft. According to Word Raiders, Libyan painter Awad Oubeyda (work at left) had no qualms using a photograph taken by Fathi Al-‘Iribi (right) to paint this portrait. 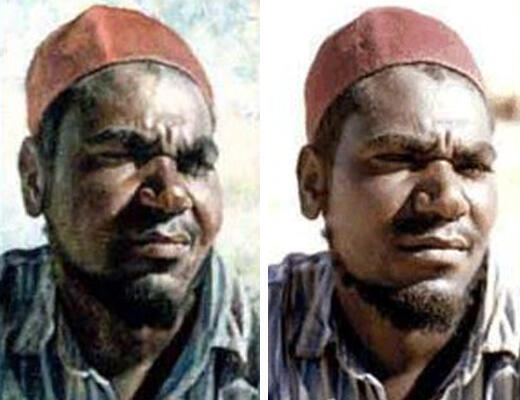