Scantily dressed women being roughed up by men in uniform - advertisers might think it's sexy, but Neapolitans certainly don't. Read more...

Scantily dressed women being roughed up by men in uniform - advertisers might think it's sexy, but Neapolitans certainly don't.

The campaign by Milan-based clothing brand Relish is a sight to be seen in Naples, Bologna, Milan, and even Rio de Janeiro. The posters show attractively dressed women being arrested and sexually abused by men in uniform. A scene that's raising eyebrows on both sides of the Atlantic.

In Brazil, the Rio authorities were not impressed when images of sexual abuse appeared on Ipanema beach - especially as the supposed policemen involved are wearing a uniform based on the city's own. And to make matters worse, the campaign was launched at a time when diplomatic relations between the two countries are very strained: Brazil had just decided to give refugee status to Cesare Battisti, the former guerrilla and convicted killer who Italy is trying to get back into jail.

The campaign is also causing trouble in Italy, particularly in Naples, where residents are trying to get the posters taken down. Relish responded to the attacks by saying that the "Relish woman is dynamic, free, modern and loves to play with her sensuality". They also defended the campaign by saying that it was based on the film Thelma and Louise.

This post was put together with the help of our Observer in Milan, Alberto Celani.

More of the campaign 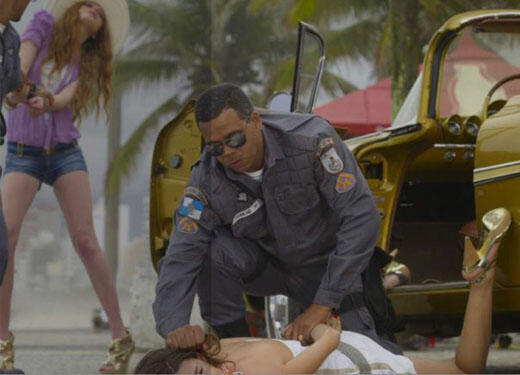 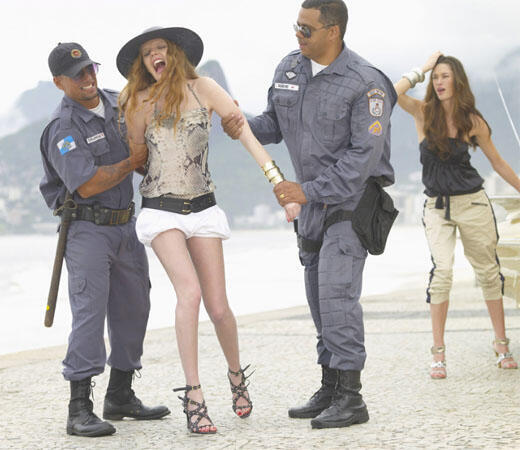 "The fashion industry caters to people's fantasies of glamour"

Cynthia Martens lives in Milan where she works in PR. For several years she's been working in the fashion sector.

Advertising tries to get people's attention and keep it. If you see an ad but later forget it or what it was for, that ad has failed. This is why advertisers often don't shy away from controversy: these Relish ads are offensive, but the result is that people are talking about Relish and are more likely to recognise the brand.

Companies do sometimes pull ads, either because of public outcry or because the negative response so outweighed the positive (in which case removing the ads is damage control.) But ads aren't usually unintentionally controversial. These ads aim to be sexy and daring, with an undercurrent of danger. Potential customers who see themselves as provocative - people who like to tap on the aquarium glass - might well respond to such ads.

Fashion often creates otherwordly, sexual ads. The fashion industry caters to people's fantasies of glamour; when people buy a designer product, they are buying a piece of that glamour. I don't personally find implied violence against women glamorous, but if this ad campaign set out to get people talking, then it has been highly effective."

"We're demanding that our mayor has these posters taken down immediately"

Lena Avolio is a secretary from Naples. She launched the Facebook group 'Get rid of the Relish campaign from Naples'.

This campaign is shocking. For one, it uses a woman's body to sell a commercial product, and on top of that, it does so in a violent way. We don't need any more violence in society.

The Facebook group has been very successful. More than 600 people have signed up in four days. We're demanding that our mayor has these posters taken down immediately and and puts some kind of regulation in place. If it's not done, we'll only shout louder."

The campaign in the streets of Naples 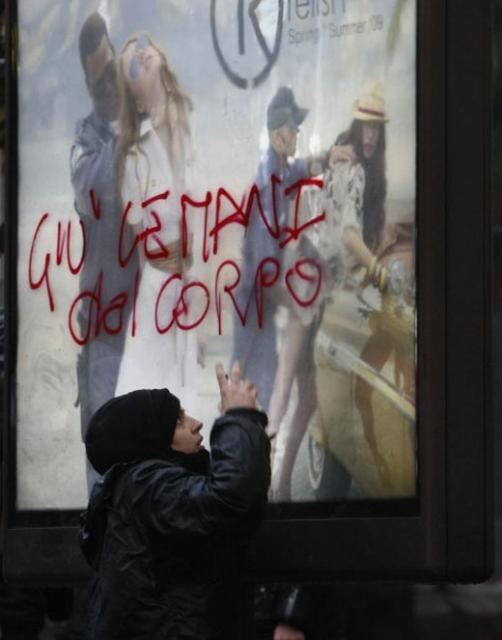 "Get your hands off that body."Photo posted on Facebook by Marinella Ioime. 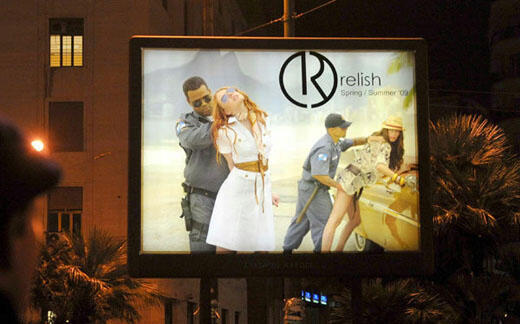