Chavez, hero of the Arab world

Go to a pro-Palestine demonstration in North Africa or the Middle East, and chances are you'll see a Hugo Chavez poster bobbing above the crowds. In Lebanon, the authorities have even named a street after him. Read more and see the photos...

Go to a pro-Palestine demonstration in North Africa or the Middle East, and chances are you'll see a Hugo Chavez poster bobbing above the crowds. In Lebanon, the authorities have even named a street after him.

Chavez's anti-American ramblings have always found a ready audience in the Arab world. But since the Venezuelan leader referred to Israel's operation in Gaza as "genocide" and expelled the Jewish state's ambassador from Caracas, his popularity has soared even higher.

"It's the same as his national populist politics, but on the international scene"

Jean Luc Crucifix has lived in Merida, in western Venezuela, for 25 years. He's director of the Programa Andes Tropicales NGO and runs the blog venezuelatina.

Hugo Chavez is constantly looking for weaknesses in the international system in order to position himself. By expelling the Israeli ambassador, he knew that he'd reach a large number of people. It's the same as his national populist politics, but on the international scene. He tries to get to those 'left behind' by telling them what they want to hear. It was the same when he called Bush the devil at the UN General Assembly in 2006. He always has the same objective: to encourage the progressive forces to go against the 'evil empire'. In the West, people don't really pay attention to him, but Chavez knows that with what happened in Gaza, he'll reach a lot of people in Arab countries. He's always enjoyed good relations with very radical countries, especially Syria and Iran. He's trying to create for himself an image as a revolutionary leader, a bit like Fidel Castro, who also managed to gain solid world support."

At a pro-Palestine demonstration in Yemen 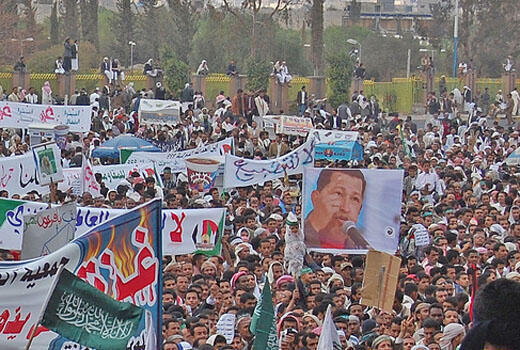 Adeeb Qasem, an IT programmer from Sanaa, took the photos: "Yemenites respect and admire Chavez more than most Arab leaders".

The opening of 'Hugo Chavez Road'

In Lebanon, where diplomatic relations with Israel have never been great, Chavez's reaction to the assault on Gaza received a particularly warm welcome. So much so that in the small town of Bireh, 45km north of Tripoli, the mayor decided to dedicate a road to the president.

A giant portrait of the South American icon has been erected at the entrance of the town.

Banners, hung the length of the road to Tripoli, read "The nation needs men like Chavez" and "Thank Chavez for expelling a Zionist ambassador from his country. When will you do the same, leaders of the Arab world?"

"Our support for him is unfailing"

Mohamad Wehbe is the mayor of Bireh.

I made the decision as soon as I heard that Venezuela had expelled the Israeli ambassador. With this gesture, we wanted to thank President Chavez for his solidarity with the Gazan population; the victims of Israeli barbarity. It's the least we could do to show out gratitude and admiration.

The people of Bireh praised the decision to name a road after Chavez. You have to remember that there are a lot of Lebanese immigrants in Venezuela, and most of them are from our region, Akkar.

Chavez is a symbol across the Arab world because he's positioned himself in our favour, while for years now the whole world has been turning a blind eye to Israel's criminal acts. He already condemned the 2006 Lebanon war that ruined our country. Our support for him is unfailing."