A new government immigration campaign is up on the walls in Italy. An Egyptian pizza maker, a Filipino carer and a Senegalese labourer are here to let immigrants know that they can stay in Italy... as long as they make the effort to integrate themselves. A message that doesn't please everyone. Read more...

A new government immigration campaign is up on the walls in Italy. An Egyptian pizza maker, a Filipino carer and a Senegalese labourer are here to let immigrants know that they can stay in Italy... as long as they make the effort to integrate themselves. A message that doesn't please everyone.

Each of the immigrants featured in the posters delivers the message in the local dialect. The posters also read "Respecting Italian laws will make your life, and the lives of those around you, easier. You have the right to live in Italy, but it depends on you. Consult the integration manual". For some, it's a positive message for immigrants, who should adopt the language and culture of their host country. But for others, the campaign is laughable, and no more than an effort to reassure Italians. Must immigrants abandon their own cultural backgrounds and become "true" Italians in order to settle in the country?

This post was put together with the help of our Observer in Milan, Alberto Celani.

"It's just a way to put public opinion at rest"

Maurizio Pagani is president of "Opera Nomadi", an association that helps Roma communities in Italy.

This government campaign represents a new approach to integration which leaves out the necessity of an exchange of cultures and a better understanding of the migration phenomenon. It's also a way of trying to uniform people, their way of thinking and expressing themselves, to correspond to an Italian ideal, (what the Northern League wants), which, by the way, does not exist. This campaign comes at the same time as numerous laws, that will systematically discriminate against immigrants, are being brought in (for example, the heightened cost of a resident's permit, the discriminatory tax rate for setting up a business etc).

At the same time, the government is completely unaware of the social needs of immigrants. All the evidence suggests that this type of campaign has no concrete use for immigrants; it's just a way to put public opinion at rest and reinforce the idea that immigrants stand as a threat for Italians (for employment rates, social security, culture and shared values).

"Immigrants have to be aware of their rights, and their duties"

Sokol Dhana, an Albanian computer science graduate, has been living in Italy since 2001. He studied at Bicocca University, Milan.

I think these posters should have been printed a long time ago. Italian society still isn't ready for so much immigration into Italy and I see in these posters a mutual way of helping both foreigners and Italians in the process of integration.

Italian society does need to look on foreigners as a helpful community rather than a problematic one - the majority of Italian citizens only hear about immigrants in the crime news. But at the same time, immigrants have to be aware of their rights, and their duties, in Italy. I found the idea of them speaking in dialect perfect. It reflects full integration without being forced. Nobody is obliged to study local dialect at school or university... but anyone can learn it.

I think that these posters were the perfect way to convince both sides that living together can make our lives better." 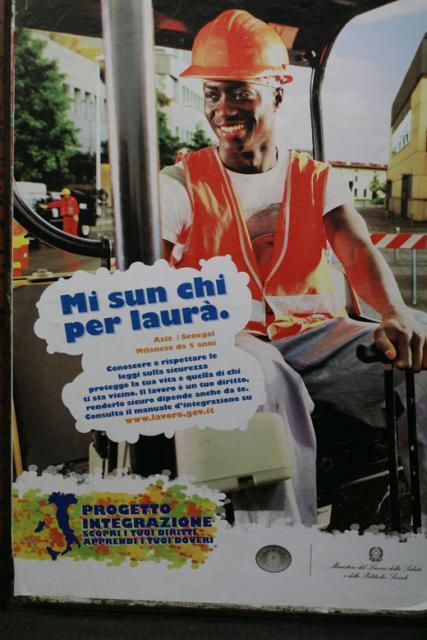 "'I'm here to work.' Aziz, Senegal, a Milanese for the past five years." 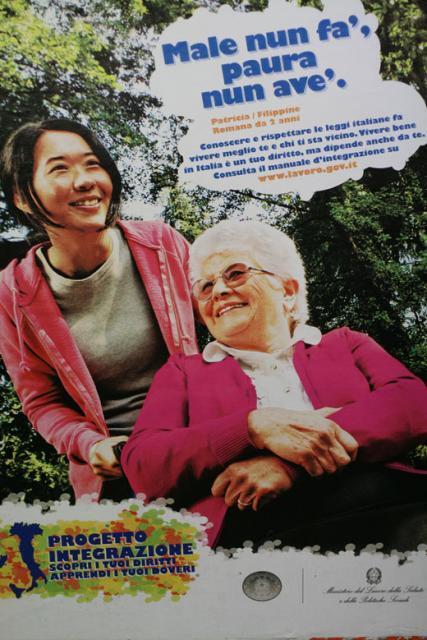 "'It doesn't hurt, there's no need to be scared.' Patricia, Philippines, a Roman for the past five years." 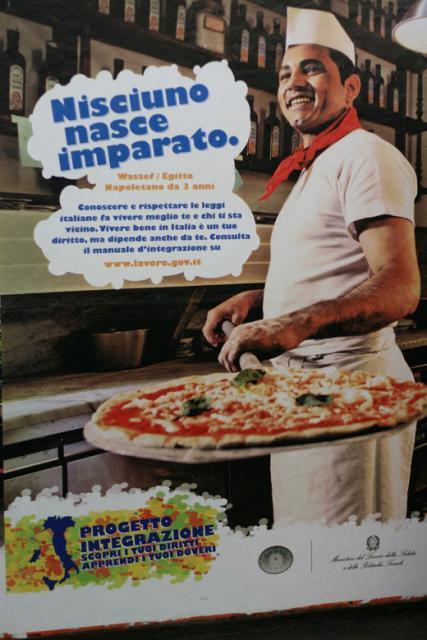 "No-one's born fully trained. Wassef, Egypt, a Neapolitan for the past three years."