The plight of Moscow's stray dogs

There are tens of thousands of stray dogs on the streets of Moscow. Hanging around building sites and subways, they're rarely aggressive, although attacks don't go unheard of. No doubt it's pretty scary when you walk down an empty street at night and suddenly a pack of dogs appears around the corner.

There are tens of thousands of stray dogs on the streets of Moscow. Hanging around building sites and subways, they're rarely aggressive, although attacks don't go unheard of. No doubt it's pretty scary when you walk down an empty street at night and suddenly a pack of dogs appears around the corner.

These homeless hounds are considered a problem by the Moscow authorities, who have promised to sterilise and tag them, and say they have even built a number of dog shelters. On paper it looks quite good. But animal rights activists claim that the reality is much gloomier. 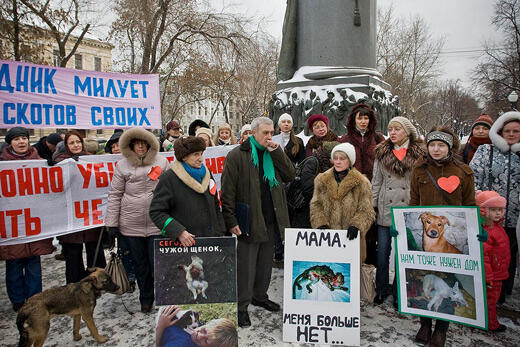 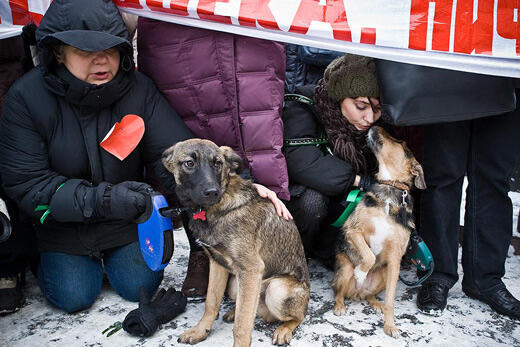 Volunteers are trying to save dogs from Yauza – a Moscow river. Workers of the city's emergency services (in blue jumpsuits) are not much help.

July2008. Video by Center for Animal Rights “Vita”. Capture takes place at 1 minute 40 of the video.

"Who gave the command to capture 35,000 stray dogs [...] and send them to just four unfinished shelters?"

Inna Alekseevna Unanyan is the chairman of Interregional Council of Stray Animal Custodians.

The situation with stray animals in Moscow is tragic, and not just for the animals, but for people as well. People believed the authorities when they issued a resolution on humane regulation of animal numbers in 2002. They promised not to kill the dogs. We activists got involved in the programme. We sterilised, fostered and made the dogs better – all by ourselves. We waited for the government to fulfill its promises.

Finally, a year ago, the government decided to build 15 shelters. But for now only four of the shelters have been built, and even those are unfinished. They don't have water or electricity; they've had no funding since last June. But the government still brings dogs there from all around Moscow. It's not only that the dogs don't receive professional care, they do not receive any medical treatment or even food! They are kept in cages and never let out to run. Sometimes they don't even get any water. Dogs die in these shelters.

It's a betrayal, betrayal of people who believed the government's promises and for the past six years looked after the stray animals themselves. And now, the government's ordered for all of the dogs to be captured. Right in front of people who have fostered the animals, they are grabbed and taken to shelters, where they die.

Moreover, among these 15 shelters there are some with a planned capacity for between 4,000 and 6,500 dogs. It's sheer madness. Many people, including some prominent Moscow artists, have protested against that. We explained that such a crowding is cruel, that shelters shouldn't accommodate more than 300 dogs. We ask, who gives these orders? Who gave the command to capture 35,000 stray dogs in the streets of Moscow and send them to just four unfinished shelters? Several NGOs filed a lawsuit against Kozhuhovo shelter which accommodes 700 dogs which are underfed and kept in cages 24 hours a day. Some dogs there have died, the others are kept alive only because of volunteers. Some dogs just disappear from the shelters. Our organisation registered a number of cases when dogs in Moscow were shot. We even have bullets, extracted from wounded dogs in vets' clinics. We tell the government about these cases, but the government does nothing about it."

A pack of dogs causes havoc on a busy main road