Watch yourself... Google's watching you

This scantily-dressed Londoner is the latest victim of unwanted fame that Google Street View can bring you as you go about your daily business. The image has reignited the debate over the legitimacy of Street View - a topic we looked at in December. Read more and see other "Street View celebrities"...

This scantily-dressed Londoner is the latest victim of unwanted fame that Google Street View can bring you as you go about your daily business. The image has reignited the debate over the legitimacy of Street View - a topic we looked at in December.

The image, taken at 108 Queensway, Paddington, England, United Kingdom, has already received 5982 diggs, provoking comments like "Google, always keeping abreast of new technology" and "Google Baps". Google Street View has not been well received in the UK, with concerns over privacy rights leading to various incidents (one Street View car was blocked from entering a village, another was attacked by local residents).

Our Observers looked at this subject a few months ago. Here's the post:

Beware of tripping over, sunbathing topless, cheating on your partner in public... - if there's a Google van passing by, the evidence will be forever set in a 360-degree photographic panorama and posted online for all to see.

Google's ever-increasing mapping applications are getting ever-increasingly closer to our personal lives. Suspicious minds won't need to bother with private detectives - they can simply log on to Google Maps and access the pedestrian-level view of the entire city - if they're lucky enough to live in Milan, Paris, or the majority of the US, New Zealand, Australia or Japan... Otherwise, not long to wait: Google Street View is soon to arrive in the UK and looks set to pan the entire world.

So far the application has been received warmly, and perceived as a meeting, directions and house hunting tool. There are even activities like scavenger hunts set up for those who find Street View more aesthetically-pleasing than real life. However, as the data collector travels further afield and more "Street View Tourists" find themselves online - not necessarily doing something they're proud of - Google has found itself under fire for privacy concerns. In Japan, a group of lawyers have set themselves up under the name "The Campaign Against Surveillance Society", just weeks after the application was rolled out there. And in the UK, there's already an anti Street View project going, before the programme has even been launched.

The world reacts to Street View

UK. In revenge for the arrival of Google's "Orwellian Street View fleet" to the UK, tech site The Register invited readers to send in snapped sightings of Google vans around the country and post them on...Google Maps.

Italy. This unfortunate van driver was captured talking to the wrong person, it seems.

Spain. Not big fans of the concept, according to this scooter driver. 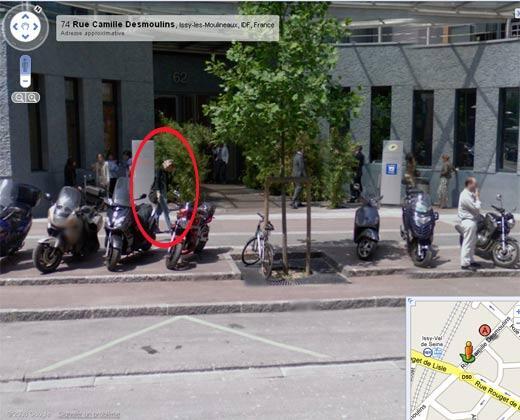 France. When we searched our own location, we were surprised to see one of our own Team Observers on the map!

"I don't see how Google Street View will face problems"

Bruno Anatrella is a lawyer from Paris specialising in privacy laws.

As a web user and user of Google Street View, I like the concept, and on the legal front, Google's got itself well covered. The people in the photos are accessories to the image and not the main subject. In France, that means that they don't have any rights over the image.

Google has managed to avoid dabbling with fundamental rights and the right to pass by: in using a van to film, they are not obstructing anyone's way, as a journalist does when he sets up a camera on the pavement for example. They've also protected themselves by blurring sensitive areas (military bases, certain ministries).

Thus I don't see how Google Street View will face problems. It looks good, and it's within the law. Google Earth is riskier, because it accesses things that you can't normally see. A swimming pool in your garden for example, when you haven't declared your taxes..."

"You could end up seeing your girlfriend/ boyfriend kissing someone else"

Jean-Marc Manach is one of the organisers of the Big Brother Awards - a privacy watchdog in France.

I wouldn't say this is designed to pry into people's private lives; that's not what Google aims to do at all. But you could end up seeing your girlfriend/ boyfriend kissing someone else, even if their faces are blurred.

In terms of dispute, there's a button users can use to make a complaint about shocking images. In the US, we already saw images of two girls sunbathing topless taken off the site.

It doesn't surprise me that people in the UK are rallying against the arrival of Street View. In a country where millions of cameras film 24 hours a day, citizens have become reluctant to have more surveillance over the past few years. So much so that the government is having trouble implementing an ID card system..."