Protests in Greece: who are the rioters?

The media have been flooded by images of violent clashes between Greek protestors and police forces since Saturday. Yet, the students who organised the initial protests claim that they are not behind the violence. So who are the hooded youths that were seen throwing marble blocks on firemen?

The media have been flooded by images of violent clashes between Greek protestors and police forces since Saturday. Yet, the students who organised the initial protests claim that they are not behind the violence. So who are the hooded youths that were seen throwing marble blocks on firemen?

Over the past four days, throngs of demonstrators have paraded along the streets of several major Greek cities, in a show of support for a teenager shot by a policeman. Towards the end of the processions, the same type of incidents take place over and over again: small groups of rioters pull away from the crowd and vandalise cars, shop fronts, banks, and doorways. Who exactly are these vandals? Our Observers tell us what they think.

Posted on Indymedia. In Iraklio, Crete.

Posted on Indymedia. In Iraklio, Crete. 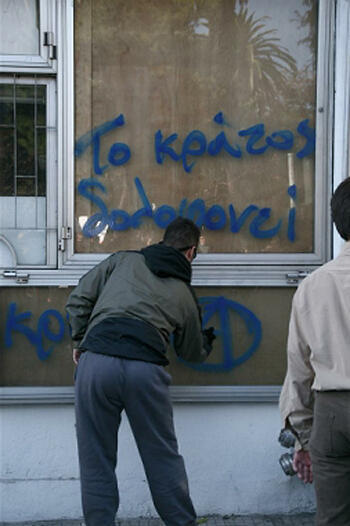 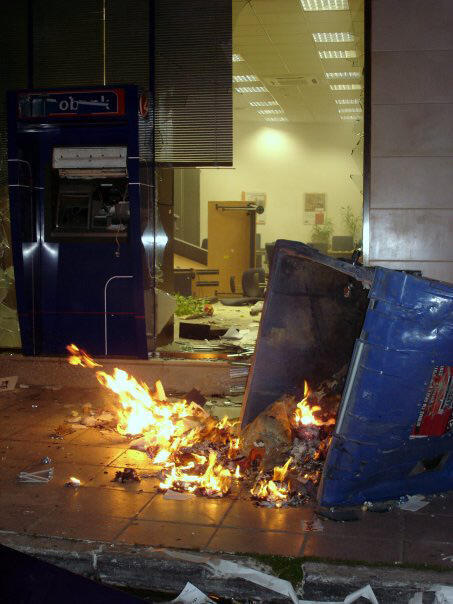 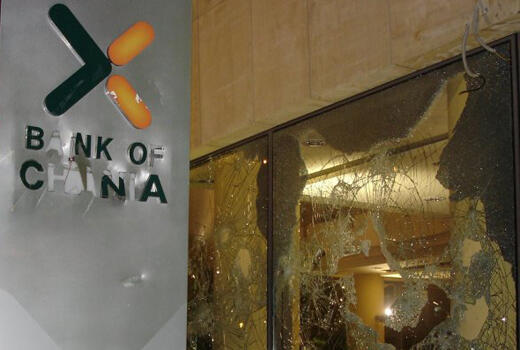 "These groups are infiltrated by policemen"

Craig Wherlock is an English teacher in Thessaloniki. He writes and publishes photos on the blog Teacher Dude.

There are 5 or 6 sites in Thessaloniki squatted by autonomist groups. They're very active. You find members of the most extremist groups, like the Black Bloc (libertarian militants) in the protests, but also left-wing groups that all more or less prone violence. Today, they all marched together, but often certain factions break away because they don't want to participate in the clashes and the vandalism.

These anarchists are clearly targeting banks and civil service offices. They haven't vandalized small stores yet, but at least 15 banks have been targeted.

I know these groups are infiltrated by cops. In 2007, I even took photos of undercover cops in a pacifist rally. But they don't care about being infiltrated. That doesn't stop them from doing what they want to do."

"There are Trotskyites, Maoists and even religious fundamentalists in this movement"

Georges Prevelakis is a professor of European and Eastern Mediterranean Geopolitics at the Sorbonne university in Paris.

The anarchist movement in Greece isn't very significant. Behind this movement is the myth of the 1973 revolution, launched by activists in the Polytechnic school of Athens. But today this protest movement is mixed : there are Trotskyites, Maoists and even religious fundamentalists.

I was part of the 1973 student revolt: we demanded democracy and free access to education. Today political groups control the protests- the same thing happened with the November 17th terrorist movement.

Today the anarchist groups are solid because they're based in a specific territory. They're grouped around the Polytechnic school and all it takes is for a police vehicle to patrol the zone for violence to erupt. When there are open clashes, they barricade themselves in the school, then attack when things grow calmer. The neighbourhood is completely lawless and police have no authority there, and that's nothing new."

"Kids imitating what they see in Athens"

The riots have spread to the whole country. I spent last night with rioters from the small Cretan town of Chania. Here the protesters aren't students. They're just kids imitating what is going on in Athens, plus some adults from underprivileged social classes. I met one factory worker, for example, who had joined the protests just to try to steal stuff.

I didn't see a single police officer all night, except when the rioters set fire to the courthouse. The rioters ravaged all of the town's banks, as well as some shops. They weren't trying to loot anything in particular, just to destroy what they can.

Foreign media seem to think that these riots are an isolated incident. That's not true. Greece has been particularly hard hit by the financial crisis, and protests are frequent. Not a week goes by without a strike breaking out."

Zoé Kazakis, 22, is an economics student in Athens. She is in charge of coordinating the protests between her university and other schools. Also read her previous testimony on student mobilisation.

We're overwhelmed by weirdos, guys who are not students and who act violently during our protests. They're the ones who throw marble blocks on the police and firemen.

This morning, I went to the Polytechnic school, where the protests started. There were no more students there, but weird guys setting fire to things. When I asked them who they were, they told me to get lost. I wonder who those rioters are. I even wonder whether they haven't been paid by the government to make the protests get out of hand.

We students are non violent, we marched alongside our teachers; my parents and grand-parents will join us tomorrow in the street during the nationwide general strike."