Relations between China and France have reached a new low as Nicolas Sarkozy's meeting with the Dalai Lama approaches. So outraged are Chinese web users that they can't wait for the meeting on Saturday to express their indignation. Read more...

After postponing his meeting with the Dalai Lama several times, Nicolas Sarkozy will finally meet the Tibetan spiritual leader on Saturday, Dec. 5, in Gdansk, Poland.

Relations between China and France have reached a new low as the controversial meeting with the Dalai Lama approaches. His rendezvous on Thursday with the European Parliament already stirred up trouble, with Beijing taking the event as an opportunity to warn the EU against jeopardising commercial relations with China.

For the Chinese blogosphere, the affront comes not so long after their outrage over the disruption of the Olympic torch relay in Paris. This time, bloggers are not only targeting French companies, but also enjoying poking fun at the country's president.

Cai Chongguo is a specialist in Chinese social ills. He lives in Paris and is the author of L'envers de la Puissance. His blog.

The Chinese government still thinks that the Tibet issue can stir up and maintain a nationalist fury, and cement the Chinese people, when in fact they've never been so divided and discontent is rising. The separation between authority and people, it seems, has already been consummated.

I haven't seen such strained circumstances since 1989: this year we've seen the riots in Wenan, the powdered milk scandal, the daily riots over the Olympic Games... And online, the net is constantly spreading out insults and jokes about politicians.

In response to all this, the government gives a ridiculous amount of media coverage to the Tibet problem. For the first time, as far as I can remember, they held a press conference about talks with the Dalai Lama's representatives; two days later Xinhua wrote a story about it. And on the 26th and 28th of November, a government spokesperson made two announcements about the cancelling of the EU-China summit.

The Chinese government would have liked to heighten conflicts with France and the EU. The problem with that is the economic crisis. Even with the 4,000 million Yuan rescue plan and the banks' spectacular interest rate falls, the Chinese stock market hasn't responded very well. And we really don't need international tension when 60% of our economy relies on world commerce."

"The Chinese counterattack is only natural"

A web user's analysis posted on the huanqiu.com forum:

Discussion title: "Has China gone too far with its reactions against France?"

Of course not. The Tibet problem is an internal problem to China, and nobody should interfere. For a long time the West has used the Tibet issue to criticise democratic standards and human rights in China. Merkel and Carla Bruni have met the Dalai Lama. But within the EU, they don't all agree. The UK, for example, has recently shifted position - now saying that it recognises Tibet as a part of China.

The decision by the Chinese government to postpone the EU-China summit shows that China won't accept foreign intervention in internal affairs under any pretext, and that we're 100% capable of resolving our problems ourselves. The decisions Sarkozy's taken will only have negative consequences for France, and many French intellectuals realise it - especially at this time of world economic crisis. He might have gained support from inside France, but this will have a hugely negative effect on Franco-Chinese relations.

Sarkozy wants to become the next Koizimi [former Japanese prime minister who caused tensions with China by visiting the graves of Second World War criminals], and the Chinese counterattack is only natural."

Corsica, surprise guest in the debate

Discussion title: "Great! China's postponed the EU-China summit because of Sarkozy's meeting with the Dalai Lama". A huge 416,393 people visited the forum, and 13,768 of them showed their support in written form.

Amongst the reactions, this caricature of the Dalai Lama: 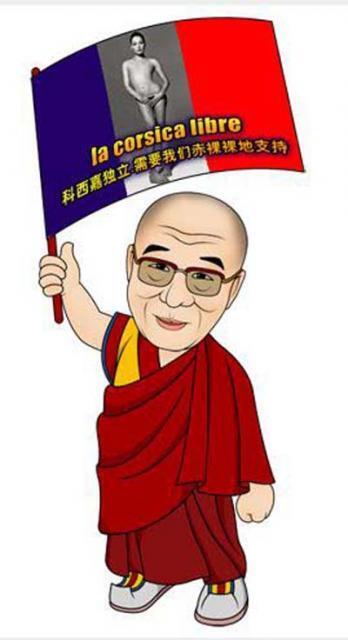 I propose that the Chinese government invites the leader of the 'Free Corsica' movement to visit China."

The title of the discussion: "If 1.3 million Chinese people get into an angry sweat, maybe it could flood Sarkozy"

Boycotting French products is back - Sarkozy has finally got China into a rage. This time, we won't only boycott Carrefour, but all French products. Could you pass this message on to everyone, to show how powerful 1.3 billion Chinese people are!"

The endless list of French products to be boycotted. Posted on the China.com forum. 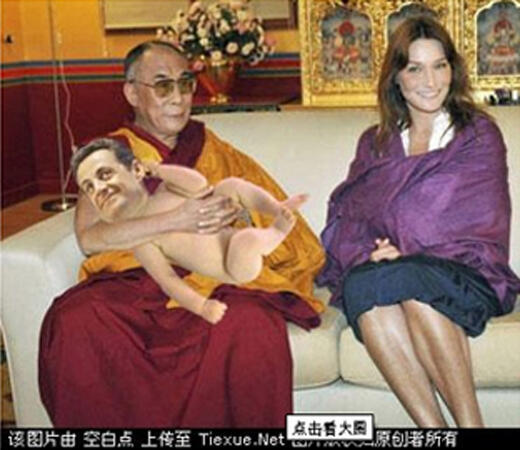 "Sarkozy is actually the Dalai Lama's son" posted on Sina.com.

The Dalai Lama: "I'm very happy in France with my son and my wife".

Sarkozy: "I'm seeing Daddy, and it's got nothing to do with you!"

Carla Bruni: "My son is young, he doesn't know what he's saying. Please excuse him".