The campaign urging passersby to "stop worrying" and "enjoy (their) life" instead will appear on ten Montreal buses until March 10 and head to Toronto as well.

On a bus in Toronto. Posted by theAtheist bus Canada

The campaign urging passersby to "stop worrying" and "enjoy (their) life" instead will appear on 10 Montreal buses until March 10 and head to Toronto as well.

The Humanist Association of Quebec, which masterminded the campaign, explains on its website why "there's probably no God":

"Though there is no scientific proof of the existence of a divine being, it is equally impossible to prove beyond doubt that God does not exist (nor does Father Christmas at that). Hence, to state that God does not exist is a matter of 'faith', whereas humanists/atheists base their conclusions not on faith but on verifiable facts."

The site then goes on to argue that not believing is without doubt the more interesting option: Quebeckers may henceforth enjoy their lives to the fullest without living in fear of the Almighty and of roasting in hell.

The Canadian initiative follows a similar campaign initiated in the United Kingdom by the humorist Ariane Sherine.

A YouTuber highlights the astounding success of the online fundraising campaign for the atheist bus ads, which collected a whopping £120,734 in individual donations, far beyond the target sum of £5,500.

"The ad sends out a negative message to believers"

Gustave (not his real name) is a member of a Paris-based Christian mission. He asked us not to reveal his real name.

"I have no problem with the principle of atheist campaigns, especially as Christian groups also advertise. I support freedom of expression, everybody should be free to express and advertise their beliefs. However, even if it's meant to be light hearted, the message actually makes me sad. By claiming there probably is no God, the ad sends out a negative message to believers. For me, my faith is a strength, that helps me have confidence and hope, that helps me not to worry. By saying that my faith is probably unfounded, the ad's message undermines that hope. I don't criticise those who don't have faith, why should they tell me that my faith is wrong?

If there's one thing people need today, in particular in big cities like London or Paris where there is so much social exclusion and poverty, it's hope. Many people can agree that faith is a positive thing, that helps people come together. It makes me sad that some want to undermine that faith."

"Our goal is not to 'convert' religious people to atheism"

Hanne Stinson is the chief executive of the British Humanist Association.

"The atheist bus campaign is not ‘atheist evangelising', as some people have called it. Our goal is not to 'convert' religious people to atheism. The Christian ads that prompted this response in the first place were for a group called 'Jesus Said', which posted links to a very aggressive and worrying website.

Our ad is aimed at people who are already non-religious, with the intention of reassuring them that there are plenty of other people who feel the same way, and that it's OK not to believe. This is why the tone of our ad was deliberately light hearted.

I'm surprised that the ad has been seen by some as an attack on religion or faith: it's not. It's just an expression of our belief, which happens to be the belief of thousands of British citizens. We don't to intend to hurt religious people. But frankly, if non-believers were to feel insulted by every Christian ad they saw, we'd spend our lives in a very bad mood!

I find it interesting that several churches have responded positively to the ad, because they say it will prompt believers and non believers alike to discuss the subject of God's existence, and generally provoke personal thought as opposed to blind acceptance of a certain dogma. This fully fits in with our humanist philosophy."

"There's probably no god. Now stop worrying and enjoy your life". That's the message that 30 London buses will be carrying from January.

Exasperated by the sometimes aggressive Evangelisation campaigns promising to "save" non-Christians from everlasting damnation, the British Humanist Association, an atheist group, decided to confront the adverts with a campaign of their own. The initiative received massive support and funding through an online campaign on the JustGiving website , and was publicly backed by millionaire atheist Richard Dawkins.

Several British religious groups welcomed the project, saying that its message will get people thinking about the existence of god. The campaign hasn't even started yet, but its already sparked a flow of comments and reactions in the English-speaking media and blogosphere. Is this the beginning of "atheist evangelists"? 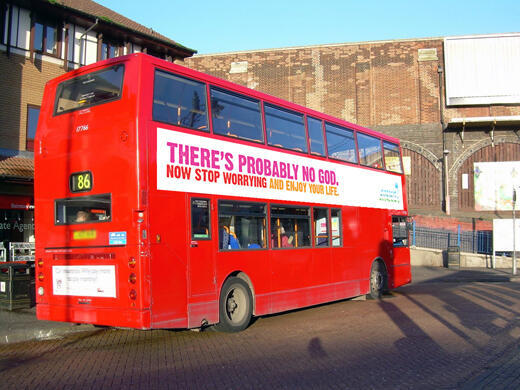