Ghardaia, a city under mud

A cluster of towns in Algeria endured over a week of catastrophic and fatal flash floods after the banks of the Oued M'Zab burst, leaving nearby buildings buried under thick sludge. Our Observer in the area filmed the extent of the damage on his mobile phone. Read more...

A cluster of towns in Algeria endured over a week of catastrophic and fatal flash floods after the banks of the Oued M'Zab burst, leaving nearby buildings buried under thick sludge. Our Observer in the area filmed the extent of the damage on his mobile phone.

Torrential rains started to fall in the region on the morning of 1 October, also the last day of Ramadan, when Muslims break their fast and celebrate Eid. In just a few days, the Ghardaia palm grove and the rest of the valley were covered in a layer of mud.

Although barely reported in the press, the catastrophe killed 34 people and injured 89. From the nine towns labelled disaster areas by the authorities, ten thousand buildings were washed away in the floods. Although the main roads into the towns have been reopened, people are denouncing the government for a delayed rescue reaction. The authorities say that it was because of the force of the water, and blamed the extent of the damage on the city's haphazard construction.

El Ghaba, one of the worst affected communes in Ghardaia. 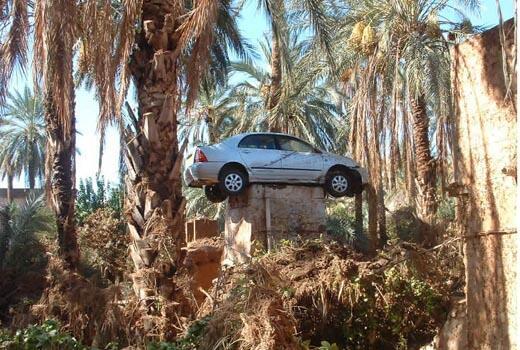 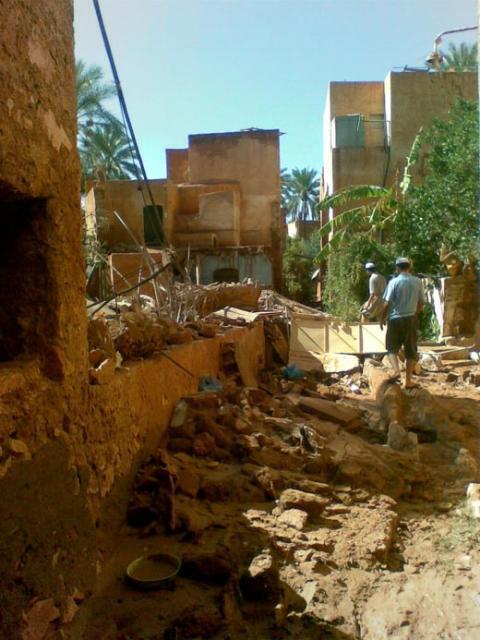 Some of the footage filmed by Smail Babaousmail.

"We started building in the palm grove, on the same level as the – eternally precarious – wadi"

Fayçal Ouaret is an architect and activist for the protection of historic buildings in Sétif. He's organising a support gathering for 1 January.

I live in Sétif but right now my heart is in Ghardaia. I was the organiser of two major international meetings on architecture there. Today I'm calling for a return to the traditional form of urbanisation in the area. We should do as they did in the past and build only on the hillsides, not in the valley, too close to the wadi. So many jewels of the city, including the Sidi Brahim Mausoleum and Souk El Aasr de Béni Isguen Place, are underwater.

Until the middle of the 20th century, buildings were never constructed on land below a certain altitude. But as more and more people came to the city and the urban landscape developed, we started building in the palm grove, on the same level as the - eternally precarious - wadi. It's these modern areas - the clutch of towns near the water - that were affected.

Like everywhere in the Third World, the authorities are not strong enough to stand up to constructors, and end up letting them build, despite saying they're in control. The consequence of that, according to the government, is almost five billion dinars (around €60 million] lost to the floods.

After a bad start followed by various excuses, the rescue operation is running now, and does seem to be taking responsibility for the situation."

"Because it was the day of Eid, emergency services were late"

Smail Babaousmail is from Ghardaia. He was there when the floods hit and filmed the scene on his mobile.

Because it was the day of Eid, emergency services were late. The authorities didn't want to give out information about it straight away, but anyway I don't think that they realised fast enough how bad the situation was.

All the protection units in the towns were immersed in water up to the first floor; the rescue equipment we needed was underwater. What could they do with just their bare hands?

The hospital was on the other side of the wadi river that runs through the centre of town. In our district we spent a whole day with two dead and one injured without being able to transport them out. Everyone knows each other here; I know some of the people who lost their lives.

Nobody could have expected such a catastrophe. We haven't seen such high river levels since 1901."